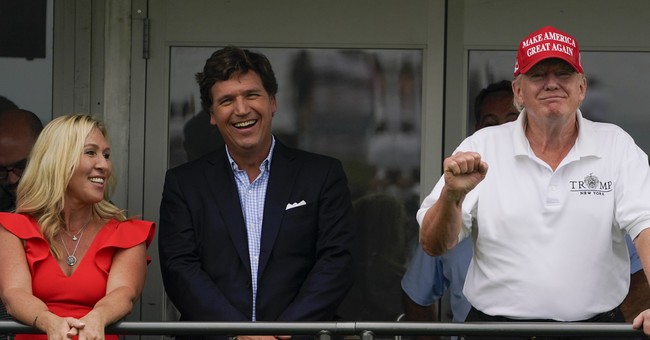 Republican Florida Governor Ron DeSantis told The View to screw off when they invited him for an interview. This insufferable panel of liberal women, who have too much time on their hands, have called the governor everything from a racist to a white supremacist. Why sit down with these annoying women? The program is a female-oriented MSNBC project in the sense that all they do is make progressive woke white women feel better about their abysmal political views. It’s the mid-afternoon massage for the condescending and self-righteous liberal elite. There’s also another reason Ron DeSantis jettisoned this interview request, and it has to do with the 2024 election.

Former Rolling Stone contributing editor Matt Taibbi has been both brutal and honest about the liberal media, the Russian collusion story, and our state of politics in general. He’s equally critical of both sides. He is a Russian collusion skeptic, adding that it was probably one of the greatest journalistic failures of all time made worse by the abject lack of self-reflection from the legacy media. The more they hype someone up during presidential cycles, the more voters are turned off. We saw that in 2016 and we could be seeing it happening again now. Taibbi wrote in his Substack that the media is burning the midnight oil to get Donald Trump elected again.

He added how this corps of reporters used to be kingmakers, adding that one interview from these people made or broke people. Now, after years of trying to keep the “fringe” out of the spotlight, the seams have busted. No, I don’t mean actual KKK members when referring to the “fringe,” but those candidates whom the upper crust of the candidate pools didn’t want to include in debates and town halls. Taibbi lists examples like barring Ralph Nader from the 2000 debates, silencing the Ron Paul army, and Hillary Clinton and John Edwards wanting to keep Dennis Kucinich out off the stage.

You can’t do that now. The American voter public is anti-press, especially those outlets that wallow and splash around in the elitist pools located in New York, Los Angeles, Washington D.C., and San Francisco. Taibbi noted how many cover stories about Mike Bloomberg, Kamala Harris, Pete Buttigieg, and Beto O’Rourke—all aimed to buoy these people and maybe carry them over the top. All went down in flames like Flight 800.

As we deal with the endless flow of bad news from the Biden administration, the press is looking to 2024 already since this year’s midterm cycle will end in a bloodbath for Democrats. There’s some Ron DeSantis press leeching out, and it’s not bad. It’s not great coverage either, but the liberal media is again trying to put DeSantis on the alter to boost his profile with voters in the hopes he can beat Donald Trump in the primary. DeSantis is a potential 2024 candidate, but he also knows the media’s track record and game. It’s why he rejected The View interview. DeSantis could turn that entire panel into sashimi in about 10 seconds. He’s not afraid of those ladies, but, as Taibbi noted, the national spotlight on him is going to kill his street credibility as an outsider. If the media wants to re-elect Donald Trump, keep pimping out stories about DeSantis. Taibbi also added that censoring Trump has done more to boost his profile in his post-presidency. The Trump purge from social media platforms only further eroded credibility with the press (via Substack):

The press is going to elect Donald Trump again. They did it once, tried again four years later, and now they’re on the hunt a third time. They hate him, but they keep doing him favors, the latest being an attempt to kill off his biggest primary rival.

If you haven’t been living under a rock, you likely noticed a sudden avalanche of center-left news offering left-handed praise of Florida governor Ron DeSantis. Reigning conventional wisdom weathervane Chris Cillizza of CNN came out with a DeSantis-heavy piece called, This is the best argument for Republicans to nominate someone other than Donald Trump in 2024, Vanity Fair went with DeSantis Splinters Never Trumpers, Politico opined that Liberals Should Welcome Ron DeSantis’ Rise, and famed Alfa-Bank hoaxer and New Yorker writer Dexter Filkins called the Floridian “Trump With a Brain” in “Can Ron DeSantis Displace Donald Trump as the GOP’s Combatant-in-Chief?”, leading a gleeful National Review to chirp, “The New Yorker Accidentally Makes Ron DeSantis Look Awesome.”

We’re watching a replay of 2015-2016, when one establishment organ after another ran laudatory stories about establishment-approved Trump rivals supposedly seizing control of the race from twenty, thirty, forty points back. Who could forget MSNBC’s “Is Ted Cruz 2016's invisible GOP front-runner?”, or the Washington Post conferring the same “plausible nominee” moniker on John Kasich that’s now cursing DeSantis, or temporarily tumescent headlines like “Marco Rubio has surged to the front of the pack”? In 2015 a near-identical New York Times story about Rupert Murdoch’s “misgivings” about the “catastrophe” Trump ran to no effect, and the National Review published a massive “Against Trump” issue, in which editors and an all-star cast of Republican heavies railed against the “excrescences of instant-hit media culture.”

If pundits really wanted a Trump-free race, they would describe DeSantis as a fascist menace, a “Real Hitler, This Time” who itches to slit democracy’s throat and ravage its corpse. There would be campaigns to pressure Visa and Mastercard into refusing payments for Dreams of Our Founding Fathers, along with boycotts of Florida oranges, Dolphins highlights, Carl Hiassen novels, and anything else “Florida” that activists could think of.

DeSantis, who’s no dummy, sees how fraught this moment is, which is why he told the cast of The View to go f*ck itself when they invited him on. Why, the DeSantis people asked, would the governor agree to sit with people who’d bashed him as a “homicidal sociopath,” a “fascist and a bigot,” and “anti-black,” unless they wanted to hype him as a less horrible buffer against Trump, who would never in a million years get the same invite? (That fact alone makes DeSantis look like a fake to Republicans). By trying to confer pseudo-credibility on DeSantis, these outlets are destroying the Floridian’s credibility as an outsider, leaving Trump the only choice for the burn-it-down vote.

Suppressing the fringe became harder when it grew and started winning primaries. The distinguishing feature of Trump’s 2016 run was extraordinary media attention, which most analysts (including me, at one point) incorrectly assumed gave him an edge by allowing him to get his message out for free. But Trump’s candidacy only really took off when the press attention went sharply negative. The mechanism that launched him from small plurality to victory in the general was a coverage avalanche that conferred elite disapproval in massive doses. The more times outlets like fivethirtyeight.com incorrectly insisted Trump couldn’t be nominated because “voters are paying more attention,” or the Washington Post ran headlines like, “The three times Donald Trump demonstrated he was unfit for the presidency in last night’s debate,” the more he gained.

Trump and Sanders both surged in 2016 when they described a country divided into a small corrupt establishment and everyone else, and declared themselves on the side of everyone else. The journalistic priesthood that’s spent the last 6-7 years denouncing these people and their voters has done the opposite, proudly aligning itself with the hated inside, celebrating credentialism, and worst of all, cheering a censorship movement that’s now proven to be an abject failure.

That story is among the biggest taboos in media now. Trump deservedly hit an all-time low in approval after the events of January 6th, sinking to 34% according to Gallup, and the Trump era seemed over when he was removed from Twitter and Facebook shortly after. Instead, by almost every measure, Silenced Trump has only improved his electoral viability since. In his first two years in office, when Trump had the bully pulpit and the world’s most-watched Twitter account, he was under 40% approval most of the time, averaging 41% overall for his entire presidency. His lowest moments came after his own statements went viral. Now, although down from March, when he briefly hit 45.7%, he’s hovering around 42%, better than his presidential average — despite near-complete exclusion from “respectable” media.

People like Trump don’t go away when zapped by Facebook and Twitter. Blue-check journalists just don’t see them as much, a dubious reportorial advantage. This new press that forgives its own mistakes but cheers lifetime bans for others needs to realize it’s achieving negative influence in the process. Failure to stare that dynamic in the face means they’re sure to repeat the error over and over, remaining in their beloved roles as gatekeepers, only in reverse. Now they’re constant threats to praise pols like DeSantis or Buttigieg out of contention. They’re kingmakers of suck, and after two election cycles, still don’t know it. Can they really keep it up for a third?

Taibbi is spot-on, but the liberal media will never concede defeat. They are the “kingmakers of suck,” which is an apt description of this industry that’s been awash with a new generation of left-wing and utterly unhinged writers. They only care about being right and will go to extreme lengths to lubricate that ego. The Russian collusion story is a primary example. They knew it was false and still ran with it. The media was also hardcore anti-DeSantis for months, especially during the pandemic. Remember the “deathSantis” smears because he wouldn’t kowtow to the words of High Chancellor Anthony Fauci and the rest of the liberal elite? As an aside, everything DeSantis has said about COVID that got torched by liberal reporters was proven to be true. It is seasonal. He did vaccinate the elderly and most vulnerable in his state. And he didn’t kill legions worth of old people like New York did. Even liberal Bill Maher credited DeSantis for handling COVID, adding that he was also a devoted reader of the medical literature at the time. Maybe that’s why New York was a death chamber for the elderly and infirmed regarding COVID. Conservatives saw the lies and the attacks against Ron. CBS News did a total fake news story about vaccine distribution and Publix which the network refused to retract. It’s possible that conservative voters will look at this new softer approach from the legacy press about DeSantis and still back him.

It could also lead to a bloodbath between Trump and the Florida governor. Who knows? I won’t be shocked if Trump announces his 2024 run days or weeks after the 2022 midterms, so be on the lookout for this trend which will come in the form of pro-ish-DeSantis stories from the media. They’re wrong about everything and they haven’t learned. Maybe they’re willing to take lashes from Trump if it means boosting circulation. We saw that with CNN. There’s no safe word, however, which makes these folks a group of sick freaks too.