There's Another Mass Shooting That Got Buried by the Media...And It's Not Hard To Figure Out Why 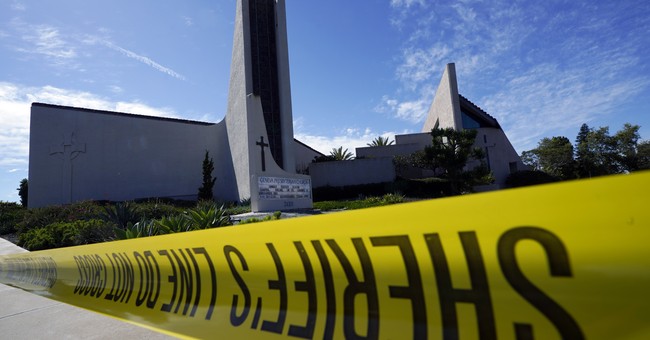 We're all focusing on Buffalo right now. A crazed, self-professed white nationalist shot and killed 10 people at Tops Friendly Market in Buffalo. Payton Gendron, 18, is the perpetrator who was taken into custody. Gendron has a 180-page manifesto that's rather insane. He says he's not a conservative, despite the liberal media trying to smear every Republican with this heinous crime. Gendron clearly says he's not a conservative, but a racist eco-fascist. He's into green nationalism, and he wouldn't be opposed if you called him a socialist. The man is nuts. Yet, there was another mass shooting in California, but this one isn't worthy of media attention for a very simple reason. The suspect is not white, though it was also motivated by hatred.

David Chou, 68, of Las Vegas killed one person and wounded five others when he opened fire at Geneva Presbyterian Church in Orange County. Chou was motivated by anti-Taiwanese sentiment. He also had Molotov cocktails prepared when he was arrested (via Washington Post):

A 68-year-old Nevada man accused of killing one person and wounding five others in a Taiwanese congregation in Orange County, Calif., was allegedly motivated by anti-Taiwan sentiment in what law enforcement is calling a politically motivated hate crime.

Investigators are pursuing federal hate-crime charges against the suspect, identified as David Chou of Las Vegas. Chou already faces one felony count of murder and five felony counts of attempted murder for the Sunday shooting.

Officials have offered differing accounts on Chou’s background. A representative from the Taipei Economic and Cultural Office in Los Angeles told The Washington Post that Chou was born in Taiwan in 1953. During a Monday news conference, Orange County Sheriff Don Barnes originally described Chou as a Chinese-born U.S. citizen who has lived in the United States for “many years” and who was “upset by political tensions between China and Taiwan.” However, late Tuesday, the Orange County Sheriff’s Office clarified that Chou had told them he was born and raised in Taiwan.

Barnes said notes written in Mandarin were found in Chou’s vehicle that supported “his hatred [of the] Taiwanese people” and his beliefs that Taiwan should not be an independent country. Barnes said he believed that hate manifested when Chou was living as a youth in Taiwan, where he was “not well-received.”

Authorities say the suspect on Saturday left his home in Nevada, where he worked as a security guard, and drove some 270 miles to Laguna Woods, where officials said he carried out his attack with chilling forethought.

After slipping into the church’s social hall during an afternoon luncheon honoring a former pastor, the man chained several of the exits shut and glued the locks, Barnes said. He also placed four “molotov cocktail-like incendiary devices” inside the church and attempted to nail doors shut, the sheriff said.

The Associated Press has more:

He opened fire and in the ensuing chaos Dr. John Cheng, 52, tackled him, allowing other parishioners to subdue him and tie him up with extension cords.

Cheng died and five people were wounded, the oldest 92. Sheriff Don Barnes called Cheng’s heroism “a meeting of good versus evil” that probably saved the lives “of upwards of dozens of people.”

Chou, who for years worked as a security guard, was booked on suspicion of murder and attempted murder and jailed on $1 million bail. He was expected to appear in state court Tuesday. It was not immediately clear whether he had an attorney who could speak on his behalf. A federal hate crimes investigation is also ongoing.

First, Dr. Cheng is a hero. He saved lives. Second, yes—the media obviously has stories about this shooting, but is CNN, MSNBC, CBS, or any other major outlet talking about this crazed anti-Taiwanese shooter also committing a horrific shooting that's also being investigated as a hate crime? No.

Chou isn't white. He left no manifesto espousing the views the media loves to magnify and apply to conservatives. It's the same old story. When the shooter is nonwhite, you go through the motions of reporting the initial story—and then let it die on the vine.

This case is no different.