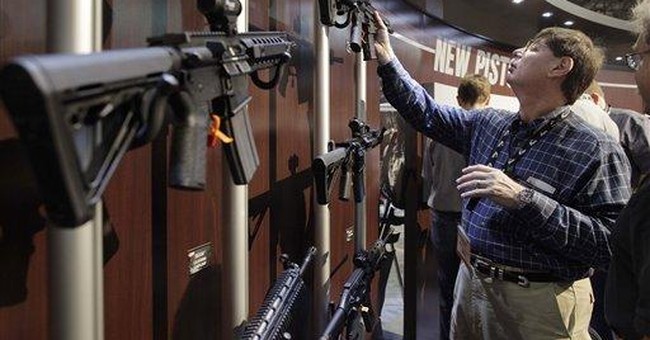 The Protection of Lawful Commerce in Arms Act (PLCAA) has long protected the gun industry from abusive lawsuits that the anti-gun Left would file if they could. No gunmaker can be sued for mass shootings or anything where their products were unknowingly and unwillingly used in a crime. It must be something serious that knowingly selling to FFLs that did business with straw purchasers or worse, sold guns with issues, like defective safeties, and did nothing about it.

These are legitimate legal points from which to file a lawsuit. Suing a gun maker simply because you hate the Second Amendment isn’t in the cards. The anti-gun Left knows this. They know the PLCAA is probably here to stay barring some seismic shift in elections. They still rail against it and call for its repeal. Joe Biden has joined that chorus now. So, how will they get around it? They’re going the consumer protection route. Yes, it’s a ruse – but don’t roll your eyes, folks. We have scored landmark rulings in support of gun rights in years past. The legal route is stacked against them in a lot of ways, not least because the judiciary got a facelift under Trump. There are clear rulings concerning the constitutionality of gun ownership not connected to service in a militia. So, the Left is trying to make the argument that gun manufacturers committed consumer fraud through their speech – and therefore, that’s not protected under the First Amendment and a criminal offense that could open the way for lawsuits. This brings us to New Jersey where the state attorney general, Gurbir Grewal, is leading the charge in trying to shred gun rights through this route.

Smith and Wesson filed suit against the New Jersey state Attorney General Grewel after he subpoenaed the company, asking for, among other things, materials regarding their marketing strategy – and ostensibly challenges whether owning a firearm is a “lifestyle” choice, and therefore violates the state’s consumer fraud laws. The anti-gun Left wants to know the inner workings of the gun industry and because it’s a state investigation, the threshold isn’t high for these folks regarding securing such a wide-ranging probe. They then, pawn this information off to their allies in the trial lawyers’ corps which the State of New Jersey names on the “approved special counsel list” on their attorney general’s website.

This isn’t a secret. It’s just not being reported. At the heart of the case, is the New Jersey Attorney General’s position that any opinion that a firearm can be used for self-defense is fraudulent.  That’s what’s going to be argued. Oral arguments in Smith & Wesson v. Grewel begin today in district court.

But through the Brady Campaign’s material, various seminars on gun litigation that the Center on Civil Justice at NYU School of Law hosted, so-called studies about guns in the home, the law firms that are at the forefront, and other state attorneys general have signed onto this crusade—you can piece it all together. The same people who back this are the ones who sent the letter to Attorney General Merrick Garland about tweaking the ATF’s rules of receivers recently. The New York Times touched on this case in March, albeit COVID and other hysterics probably drowned out this ludicrous gun grab attempt from making it to the airwaves. Now, we’re on the brink of war in Gaza, and mask-wearing theater ensuing so that will certainly provide more cover. Here’s what the NYT wrote. It’s a good overview:

A largely overlooked lawsuit is playing out in New Jersey about the way Smith & Wesson advertises its wares, but the truth is the case is about much more than advertising. The outcome could have profound implications for the gun industry.

In business and policy circles, and within the gun industry itself, the case is seen as the country’s most consequential legal battle over the future of gun control.

…Phil Murphy, the Democratic governor of New Jersey — a longtime gun control advocate — decided to do something novel: In October, his attorney general, Gurbir Grewal, sent a subpoena to Smith & Wesson from the state’s division of consumer affairs as part of an investigation into advertising fraud, seeking a trove of internal documents. No industry has any particular immunity from cases about the claims it makes in advertising.

In truth, the subpoena is a Trojan horse to expose publicly, for the first time, the inner workings of the gun industry.

“The gun industry is afraid of nothing more than the ability of the public to see behind the scenes and to see their internal documents and to have their executives sit down and face the music,” said J. Adam Skaggs, the chief counsel for the Giffords Law Center to Prevent Gun Violence.

In December, Smith & Wesson sued the State of New Jersey in federal court seeking to enjoin the state court from enforcing the subpoena.The company argued that the case wasn’t about advertising. “In reality, it seeks to suppress and punish lawful speech regarding gun ownership in order to advance an anti-Second Amendment agenda that the attorney general publicly committed to pursue,” Smith & Wesson said in its filing.

In a motion to dismiss the suit last month, Mr. Grewal argued that Smith & Wesson “attempts to turn a garden-variety state consumer-fraud investigation into a federal constitutional case.” The state’s consumer affairs division, “like similar state consumer agencies all across the country,” the filing noted, “regularly initiates investigations and enforcement actions to protect consumers from unlawful business practices involving a range of goods and services.”

Let’s call New Jersey’s reply what it is: disingenuous. The court knows — and clearly Smith & Wesson knows — that the advertising fraud investigation is not “garden-variety” anything.

But the motive of the investigation, for the purposes of the law, is beside the point. The case will rest on whether Smith & Wesson breached state laws that prevent companies from misleading customers.

The implications of this case are paramount. The National Rifle Association is on life support. Love them or hate them, especially in the wake of how they handled their funds, they were the only true national pro-gun rights association that had the ability to press for gun rights everywhere. Not every pro-Second Amendment organization has that ability. Make no mistake, most if not all are still excellent at what they do for the movement. Calguns, Gun Owners of America, the Virginia Citizens Defense League, etc., are all great, but most are geared towards defending gun rights in their respective states. VCDL is especially effective at mobilizing its people to defend Second Amendment rights. NRA is still the only true national entity—and they’re on the ropes. Should this case prove successful, then any advocacy on issues the Left finds disagreeable could be morphed into a legal issue based on ‘consumer fraud.’ If you think this is pie-in-the-sky stuff, we’re already seeing that fight with oil and gas. Exxon Mobile is fighting a suit in the Second Circuit as we speak where the gas company is being sued on the basis that they violated the Consumer Protection Procedures Act as their product is contributing to global warming.