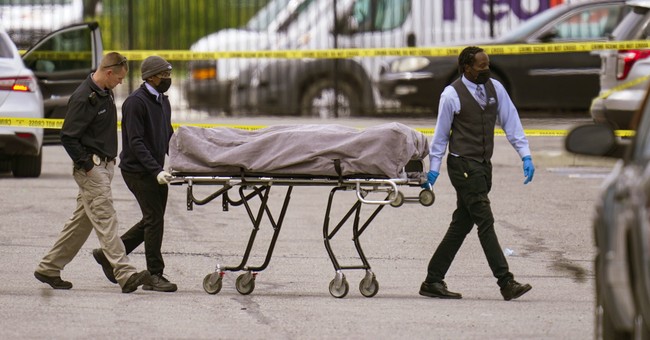 Indianapolis was rocked by a mass shooting this week. Police responded to reports of shots fired at a FedEx operational facility around 11 PM on April 15. Eight people were shot and killed. The shooter, Brandon Hole, 19, killed himself. Hole was confirmed as a former FedEx employee. The motive is still being investigative, but Sikh groups are demanding a hate crimes probe as half of the victims belonged to that ethnic group. Yet, as we piece together why Hole committed this heinous crime, we have to wonder if this tragedy was avoidable. No, I’m not talking about gun control. I’m talking about the gun laws we already have on the books concerning persons with mental health issues. Hole had his moments (via The Hill):

The FBI on Friday revealed that the mother of the suspected gunman in a shooting that took place at a FedEx facility in Indianapolis, Ind., warned authorities last year that her son might commit “suicide by cop.”

"The suspect’s mother contacted law enforcement to report he might try to commit ‘suicide by cop,’ ” Paul Keenan, the special agent in charge of the FBI’s Indianapolis field office, said in a statement shared with The Hill.

Keenan said that authorities received the warning in March 2020 about the suspect, who on Friday was identified as 19-year-old Brandon Scott Hole.

The agent added that the FBI got involved after a police search of the suspect’s bedroom uncovered a shotgun, which was not returned to Hole following April interviews with the suspect.

However, Keenan said that there was no criminal violation found, and that no "Racially Motivated Violent Extremism (RMVE) ideology was identified during the course of the assessment."

This isn’t the first shooting in which the suspect has mental health issues. In Parkland, Florida, the 2018 Marjory Stoneman Douglas High School shooting committed by Nikolas Cruz was found to be absurdly preventable if federal, state, and local officials had followed through on the various red flags and mental health episodes that Cruz exhibited before he shot and killed 17 people.

It seems we have a rather disturbing trend in law enforcement here. In the Parkland shooting, everyone knew Cruz had issues and did nothing. If reported properly, he could have been mentally adjudicated which would have prevented him from buying the AR-15 used in the shooting. The current gun laws would have stopped the shooting. Let's go to bombs. Last Christmas, Anthony Warner blew up his RV in Nashville. Warner's girlfriend warned police he was making bombs a year before detonating his vehicle. In South Carolina, Dylann Roof's racially motivated church shooting in Charleston back in 2015 might have been prevented if the FBI had updated their background check system to include his admission to drug charges.

The laws are only as good as the people enforcing them and filing the right paperwork. Could this be another tragic example of a possible prohibitive possessor slipping through the cracks? We’ll keep you updated.

Brandon Hole, the 19-year-old who the police say fatally shot eight people at a FedEx facility on Thursday night, legally purchased two semiautomatic rifles he used in the attack more than six months earlier, according to the chief of the Indianapolis Metropolitan Police Department.

In March of 2020, the police had seized a shotgun from Mr. Hole after his mother raised concerns about his mental state, records show. But, Chief Randal Taylor said, the fact that Mr. Hole was legally able to make the more recent gun purchases indicates that, despite his mother’s warning and the police seizure of a gun, the authorities had not deemed him subject to Indiana’s so-called “red flag” law,  which bars people who are found by a judge to present dangerous risk from possessing a firearm.

Under the state’s longstanding red flag law, the authorities have two weeks after taking someone’s weapon to argue before a judge that the person is unstable and should be barred from possessing a gun for a period of time. But Chief Taylor was unsure whether a hearing like that ever took place — even though the police never returned the shotgun they had seized last year.