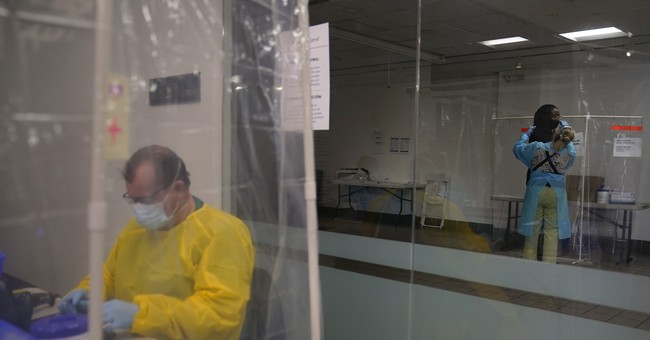 There are many reasons why COVID has been a disaster for the United States. We locked down too soon, especially in rural areas which saw next to no cases. We blew up those people’s lives for no reason. Democratic governor forced COVID patients to be admitted into nursing homes which killed thousands. In fact, nearly half of all COVID deaths in the US stem from nursing homes. We were told to not wear masks, then told to wear them, and now they may not be all that effective in curbing the spread. It’s a fiasco.

Now, as we deal with new strains of COVID in South Africa and the United Kingdom, the White House COVID task force decided to drum up some scares by suggesting the latest spike in the US could be due to a US-based variant. The good news here is that the new UK/South Africa strains aren’t any more lethal. They’re more contagious, but the lethality hasn’t increased. It doesn’t make you any sicker. Also, there appears to be no US variant at all. The data doesn’t suggest that. The Centers for Disease Control and Prevention had to smack down this floated theory (via NYT):

Reports of a highly contagious new variant in the United States, published on Friday by multiple news outlets, are based on speculative statements made by Dr. Deborah Birx and are inaccurate, according to several government officials.

The erroneous report originated at a recent meeting where Dr. Birx, a member of the White House coronavirus task force, presented graphs of the escalating cases in the country. She suggested to other members of the task force that a new, more transmissible variant originating in the U.S. might explain the surge, as another variant did in Britain.

Her hypothesis made it into a weekly report sent to state governors. “This fall/winter surge has been at nearly twice the rate of rise of cases as the spring and summer surges. This acceleration suggests there may be a USA variant that has evolved here, in addition to the UK variant that is already spreading in our communities and may be 50% more transmissible,” the report read. “Aggressive mitigation must be used to match a more aggressive virus.”

Dismayed, officials at the C.D.C. tried to have the speculative statements removed, but were unsuccessful, according to three people familiar with the events.

C.D.C. officials did not agree with her assessment and asked to remove it but were told no, according to one frustrated C.D.C. official, speaking on condition of anonymity for fear of retaliation.

Dr. Birx could not immediately be reached for comment.

Dr. Birx is on her way out, announcing her retirement around Christmas time last year. Around the time of her retirement announcement, it was reported that she had traveled to her Delaware vacation home during the Thanksgiving holiday despite telling people to stay home. We had scores of politicians who have said one thing only to be caught doing the opposite. California Gov. Gavin Newsom is probably one of the most egregious incidents because he locked the state down, then absconded to Napa with his wife for a swanky dinner with medical doctors—no masks, no social distancing. You can see why people are tired here. These clowns destroyed my business or my job, and they don’t even follow their rules. New York City Mayor Bill de Blasio told people not to come to Times Square for New Years'. Well, he was there with his wife dancing.

This is one of the many reasons why COVID fatigue has accelerated to ‘screw it’ levels and rightfully so. No one knows what they’re doing or what they’re talking about. That goes double for Joe Biden who doesn’t even realize his COVID agenda has mostly been enacted by President Donald J. Trump.