We All Knew Dr. Fauci Was Going to Issue a Christmas Warning. Want to Guess What It Was? 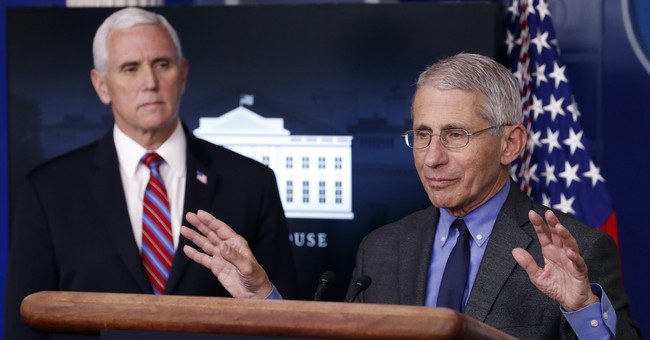 He said something similar before Thanksgiving, so we shouldn't be shocked that he's doling out similar advice for Christmas. Dr. Anthony Fauci said that it's probably best not to travel during the holiday season. He is not seeing his daughters for the first time since they've been born. Look, the man doesn't deserve any gold stars here since the mask advice he offered was botched in its delivery and he's, in general, been all over the place during this crisis. He also said New York did it right when all the original models suggest that the Empire State did the exact opposite of what one should do with regards to curbing the spread. He did say that with the distribution of COVID vaccines, we should be back to normal by next Christmas (via Fox News):

Dr. Anthony Fauci, the nation’s top infectious disease expert, said this week that he and his wife will not be seeing his three adult children for Christmas or for his birthday on Christmas Eve amid the ongoing coronavirus pandemic, and urged other Americans to do the same.

Fauci made the comments during an interview with the Washington Post’s Power Up newsletter. He said it would mark the first Christmas not spent with his three daughters since they were born.

"I’m going to be with my wife – period," Fauci told the outlet on Monday. "The Christmas holiday is a special holiday for us because Christmas Eve is my birthday," said Fauci, who is turning 80. "And Christmas Day is Christmas Day. And they are not going to come home … That’s painful. We don’t like that. But that’s just one of the things you’re going to have to accept as we go through this unprecedented challenging time."

"Stay at home as much as you can, keep your interactions to the extent possible to members of the same household," Fauci said. "This cannot be business as usual this Christmas because we’re already in a very difficult situation, and we’re going to make it worse, if we don’t do something about it."

"It is highly likely that with vaccines being distributed, that we will be back to normal by next Christmas," Fauci said.

The death toll is terrible, but sorry, it's not worth shutting down the entire country, destroying millions of jobs, cannibalizing an untold number of livelihoods, and impacting the childhood development of our children. Schools aren't sources of spread, though that's what we were told by the media. Bars and restaurants only account for 1.4 percent of COVID spread in New York. The media keeps forgetting that almost half of the 300,000-death toll comes from nursing homes, which were forced to admit COVID-positive patients by Democratic governors. The virus was weaponized in an effort to keep Donald Trump from winning a second term. We were told that we would all die unless we remained inside, which ironically, until Thanksgiving, was the source for most of the spread.

I didn't see my folks for Thanksgiving. It was my choice. And then I contracted COVID earlier this month. Yes, I'll be hanging back for Christmas as well, but you do you, folks. Just be safe and be aware. And safe travels if you're seeing your families. Light is at the end of the tunnel.

Now, Fauci says he's not suggesting everyone cancel Christmas, but that it should be an individual choice.

Dude, this is why we have pandemic fatigue.