Rhode Island Governor: Obey COVID Restrictions...Except for Me Because I Need to Go to a Wine Bar 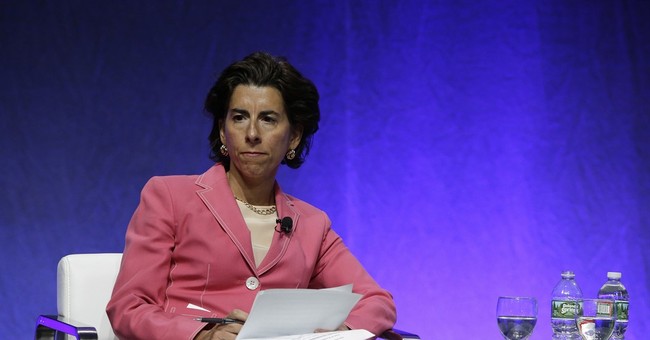 Democratic Rhode Island Governor Gina Raimondo joins New Jersey Governor Phil Murphy, New York Governor Andrew Cuomo, Denver Mayor Michael Hancock, and California Governor Gavin Newsom in getting busted for telling people to obey the COVID restrictions and then doing the exact opposite. It's almost as bad as Newsom's swanky dinner in Napa, where he dined without masks or social distancing with friends and medical professionals. It makes one wonder if this virus is a big deal if doctors are taking a "screw it" attitude. That's what Raimondo did. She went to a wine bar. Yeah, she told people to obey the rules and left for the bar (via Daily Caller):

Photos published by Turtleboy Sports and the libertarian group Liberty Rhode Island reportedly show Raimondo sitting in a local restaurant for a “wine and paint” night without a mask. The photo was taken by Erica Oliveras, who said she was also at the event at Barnaby’s Public House in Providence, Rhode Island, according to ABC 6 News.

Oliveras defended the governor and said that she didn’t realize the photo would spark backlash. She also said that the governor “only took her mask off whenever she was drinking her wine.”

One day after Raimondo visited the wine bar, Rhode Island Department of Health Director Dr. Nicole Alexander-Scott tested positive for coronavirus. Raimondo said in a Sunday Twitter announcement that she had tested negative for the virus, but was self-quarantining.

Oh, I forgot about Mr. Hancock who told Denver residents to cancel their Thanksgiving plans just before he boarded a plane to visit his family for the holidays. Again, we have the two separate rules doctrine regarding Democrats and the rest of us. We have to stay home, but they can go to the bar.

Look, folks, I contracted COVID earlier this month. It's no picnic. It was awful. Luckily, I didn’t need hospitalization, but the vast majority of people who contract it will recover. But if we're going to play this game in blue states, where staying inside until nothing can get us sick appears to be the mentality, then you better not do what these clowns have done. Mobile phones and social media increase the likelihood of you getting caught flouting your own rules. In fact, it's almost assured.

In the meantime, we have people like Bill Gates who think life is like Sim City, and that closing down bars and restaurants again has to happen, although it is sad. There has to be a rule that those who are simply detached from the daily grind of life can't dole out advice. Gates is not a medical expert, and we all know four-to-six months of any establishment shutting its doors is a recipe for economic death. Gates sits on billions of dollars and probably hasn't done anything that we normal folks do every day for years. Shut up, dude. The jobs lost to this thing because Democrats and the media wanted to boot Trump is astounding. The lack of education and childhood development that will come because teachers' unions wanted to keep schools closed will be even more detrimental. Schools are not sources of so-called super spread. And bars and restaurants account for 1.4 percent of COVID spread in New York. Democrats are doing this because they get their rocks off killing people's jobs and taking power grabs for a spin. They love to inflict pain on those they view as inferior, and that would be the lesser educated and those who do jobs we take for granted.

This virus is no picnic if you get it, sure. But the idiocy and weaponization of this pandemic to secure an election win for Democrats is far, far more damaging.