The One Question Joe Biden Wasn't Asked Last Night...And It's Not All That Shocking 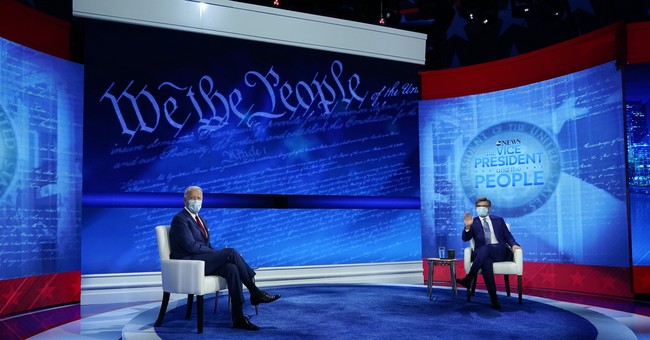 Sleepy Joe Biden had his low energy town hall event with ABC News’ George Stephanopoulos, a former Clinton operative, and to no one’s surprise—he didn’t ask the former vice president about his son, Hunter. Hunter Biden is now back in the news for a couple of reasons. One is that a trove of emails from his MacBook Pro shows that Joe lied about not knowing about his son’s business dealings.

The former VP was introduced to executives of the Ukrainian energy company, Burisma, which had Hunter on its board. Hunter was in that position to allegedly sell access to top Obama officials. So, Hunter Biden’s shady business arrangements were exposed, Joe Biden was also shown to be a liar, and Facebook and Twitter tried to censor this story, which The New York Post scooped, which only drew more attention to it.

The emails came from Hunter’s MacBook Pro, which he left to get fixed at a Delaware repair shop in April of 2019; he forgot to pick it up.

The ABC News town hall event was 90 minutes long. Not a single question about how his son used his name to enrich himself and how the former VP might have known about it and did nothing. I mean, in this scenario, Hunter is bound to give daddy a slice of that Burisma pie when he’s long left office, right? It isn’t shocking, but the overt bias is another level. We know ABC News is biased. We know this question was never going to be asked, but it needs to be called out regardless (via Newsbusters):

On Thursday night, ABC News cowardly refused to engage in even the most basic, adversarial journalism, refusing to ask former Vice President Joe Biden during their 90-minute town hall about his son Hunter Biden’s latest reported acts of corruption.

This in-kind donation to the Biden campaign came a day after Facebook and Twitter committed Orwellian and un-American behavior in enacting widespread censorship of bombshell New York Post reporting about Hunter (and a follow-up), including e-mails from a Burisma executive thanking Hunter for having setup a 2014 meeting with his famous father.

ABC’s town hall featured 11 audience member questions (across nine topics) and 19 comments/questions/queries from chief anchor and former Clinton official George Stephanopoulos, but none touched on a story so revealing that the leftist media and tech racket have falsely deemed it to have been hacked material.

No questions for Joe Biden about Hunter tonight... shocker.

55 minutes into the #BidenTownHall, still true no questions about Joe Biden's corruption.

No questions about the New York Post report that Hunter Biden held an equity share of “10” for “the big guy” and that Hunter was to receive $10 million a year “for introductions alone.” https://t.co/9blefx8jLN

75 minutes into the #BidenTownHall and ZERO questions about how a top executive at Burisma allegedly emailed Hunter, “[T]hank you for inviting me to DC and giving an opportunity to meet your father and spent [sic] some time together.” https://t.co/fTeP5Ebx1M

#BREAKING: As expected, @ABC News and chief anchor/former Clinton official George Stephanopoulos made sure that there was NOT A SINGLE question about Hunter Biden at this #BidenTownHall.

Another example of censorship and collusion.

The Democrat-media complex is at work hard, reinforced by their equally powerful minions that run Silicon Valley.