What Sally Yates Said About Comey Was the Only Silver Lining Today...That's Not Saying Much 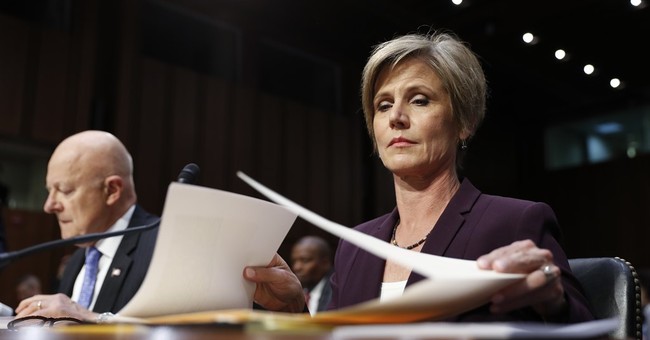 Okay, Sally Yates really deployed countermeasures in today’s hearing over Obamagate, but if there was a silver lining, for lack of a better term, it was her sharp criticism of ex-FBI Director James Comey’s pursuit of Michael Flynn. Yates said that Comey went “rogue” going after the former official. Flynn was roped into the Russian collusion delusion over phone calls he had with then-Russian Ambassador Sergey Kislyak, which were run-of-the-mill communications that occur with a new, incoming administration. Even Comey admitted that the calls appeared “legit.” Still, Comey and McCabe were going to get Flynn—no matter what. And it’s not just conservatives saying that. Obama gave his marching orders regarding Flynn in that infamous January 5, 2017, meeting, where former Vice President Joe Biden suggested using the Logan Act to go after Flynn. Yates was also at that meeting, which was grounded in Obama thinking of ways to protect the FBI’s Russian investigation from being hampered.

“Get the right people on it,” said Obama.

"I was upset that Director Comey didn't coordinate that with us and acted unilaterally," Yates said.

"You could use that term, yes," Yates agreed.

That meeting, which took place on Jan. 5, 2017, was of great interest to Graham, who wanted to know why Obama knew about Flynn's conversations before she did. Graham and other Republicans have speculated that Obama wanted Flynn investigated for nefarious purposes. Yates claimed that this was not the case, and explained why Obama was aware of the calls at the time.

Yet, she still supported the prosecution of Flynn and said the DOJ under Attorney General William Barr filing a motion to dismiss the criminal charges was “highly irregular.” No doubt Comey went rogue. This isn’t the first time. He did send memos on the meeting he had with President Trump to a friend with the intention of being leaked to the press in order to get a special counsel appointed. That happened. And that special counsel investigation has issues of its own, not the least being that it was set up to provide a polish on the FBI’s overreaching and overall disastrous counterintelligence probe into collusion that ultimately found nothing. The special counsel probe were the ones who did put the screws to Flynn, rehashed the Logan Act nonsense, and forced the former general to plead guilty upon threat of financial ruin. Still, there is no case. A DOJ memo that was recently released shows that six days after the FBI interviewed Flynn in January of 2017, there was nothing to the allegations that he was a Kremlin pawn. The DOJ had all but cleared Flynn on the Russian agent nonsense. This memo was kept hidden for years. Why? Who ordered it to be deep-sixed?

#FLYNN Breaking: Draft internal GOV memo 1/30/2017 unsealed by court. Timing: Written 6 days after Flynn interview Kislyak calls, “FBI recognizes the discrepancy between the statements + the actual calls, but determined that Flynn was not acting as an agent of Russia” @cbsnews pic.twitter.com/wXOVGnvz3x

yet they were hidden from the defense for three years...The production includes heavily redacted notes from Peter Strzok taken at the same January 25, 2017 meeting. Strzok’s notes establish the DOJ nixed any Logan Act prosecution." @CBSNews pic.twitter.com/3GhoF0gCi3

Yates is no angel in all of this; she’s the resister-in-chief, to be frank. But yes, a broken clock is right twice a day with regards to Comey’s actions with Flynn. That’s about it though. Today’s hearing did next to nothing to exonerate the Obama DOJ of gross bias and incompetence, especially with the other victim of this collusion delusion, Carter Page.

Joe Biden still has not come clean about what he said in that January 2017 Oval Office meeting about targeting General Michael Flynn with the Logan Act.

Conveniently, today Sally Yates claimed she does not remember what Biden said. pic.twitter.com/VrBXxKVVSI