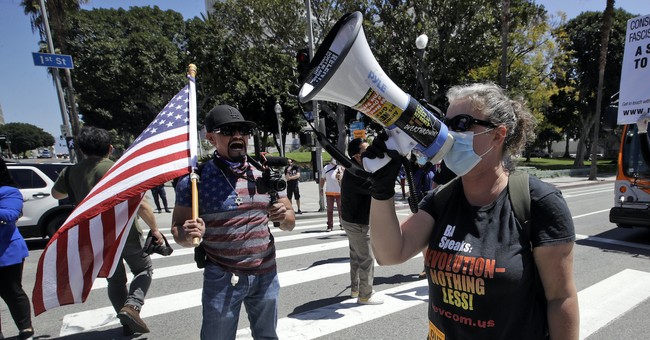 Folks, I know many of you disagree with my take on the lockdowns. Yes, I support them but want this country to re-open as quickly and as safely as possible. And I knew the fallout from this, given that the states that have enacted the most draconian measures are ones that we really shouldn’t be shocked given their deep-blue nature. At the same time, these Acela Corridor and West Coast states, Democratic bastions all, are the hardest hit; New York City is ground zero for the US-based Wuhan coronavirus outbreak. I also know that in three-to-four weeks, some business might not be able to come back. We can’t remain closed until there’s a vaccine, but we also cannot rush the process and threaten the nation with the second wave of infections. We have no vaccine yet. And then, there’s the fact that there is no rural hotspot trend occurring. The 29 or so states that are planning to enter phase one should be allowed to do so since they’re nowhere near as bad as the Tri-State area or other parts of New England. If you look at the map of cases, you know which states should remain under lockdown and which ones can start easing back into a better routine. Texas starts on Friday, May 1.

Yet, one thing that has bubbled up from the authoritarian ethos of the Left regarding these lockdowns is that if you’re for re-opening, you want black people to die. The protests against the lockdown are rooted in white supremacy and racism, or something. Yeah, crazy people talk, but the Democratic Party has tens of millions of members. And of course, Vox Media was there to explain “the whiteness of anti-lockdown protests”:

But if states open back up, it will come at whose expense? In the US, black Americans are dying of Covid-19 at disproportionate rates to other racial and ethnic groups. According to an American Public Media Research Lab report published this week, almost 50,000 people have died of Covid-19 in the country. Data for about three-fourths of those deaths reveals that the mortality rate for blacks is 2.7 times higher than for whites. Although blacks make up only 13 percent of the population, they represent 30 percent of Covid-19 patients in the US. The data continues to reveal which Americans face the greatest risk if the country is reopened.

Huntington Beach and Newport Beach have some of the highest numbers of confirmed cases in Orange County, yet the residents’ eagerness to end social distancing orders feels informed and motivated by the reality of who is most impacted by Covid-19 — black communities. Both of these cities are predominantly white and affluent; Newport Beach’s median income hovers around $123,000 while Huntington Beach’s is about $88,000, compared to the national median income of $62,000.

While it might seem ludicrous that whiteness and income level would somehow make people immune to infection, there is some truth to such beliefs. In the event that these rich white folks find themselves with a cough and fever, they are more likely to have the reassurance and privilege of access to local testing centers and quality, unbiased health care. Meanwhile, black people do not have access to quality and racially unbiased health care. Between 2010 and 2018, blacks were 1.5 times more likely to be uninsured compared to whites.

Being white is the default identity in America. Whiteness is our cultural tapestry. It’s America’s norm, against which all others are measured, and there is a special kind of security that comes along with being the norm. So when you suddenly do not have free rein to go about your business unchecked, it can feel like a massive threat. And in turn, protesters have taken to the streets to fight to keep that security. That feeling of “oppression” these white protesters have voiced is the residual effect of living in a country that has been shaped to cater to their racial majority status, and consequently, their perceived loss of power and privilege.

I won’t lie. The column wasn’t all that nutty until that last paragraph. This isn’t a racial thing, which is why liberal academia has become increasingly more stupid as identity politics and political correctness are replaced with actual facts and reasoning here. Seriously, is it ok that a Democratic governor order police to take the license plates numbers of those trying to attend a drive-in church service for Easter? Is it really necessary to arrest a former police officer in Colorado who was having a catch with his daughter? What about the woman who was arrested in a salon sting? I don’t like the lockdowns, but it was necessary to curb the spread and prevent the hospitals from being overrun. The curve has flattened, and governors can start looking at roadmaps to re-opening. What we have here is if you go back to a semi-normal routine, like eating at a restaurant that caps capacity at 25 percent, you might be a party to killing people of color or something. You see the seeds here. The red states, the ones who weren’t hit as hard, must feel bad for being…not hit as hard so that it doesn’t look so bad for Democratic politicians, like Mayor Bill de Blasio, who totally dropped the ball. De Blasio’s response until mid-March was for everyone to go out and eat, even when presented with evidence by the city health commissioner that lockdown measures had to be taken to curb the spread. The Big Apple is now COVID-19 city, totally infested. The good news there is that hospitalizations have stabilized, and the daily death toll is dipping.

There are some serious constitutional overreaches happening to the residents of Blue America. And no, for those lucky states not hit as hard, you’re not going to kill black people by going back to work. Yeah, 26 million people are out of work and the Democrats want to keep it that way until there’s a vaccine. That’s becoming clear and during an election year. Good luck with explaining that to 20+ million voters. Be prepared, there will be some sort of re-infection uptick as states start to re-open, which was always a warning from the Trump administration. No one ever said that there wouldn’t be any new infections with phase one, but the liberal media is primed to gaslight us on that angle. This will be trial and error for a lot of states. Let’s hope for the best.