'Blow Up the Bridges': Some Wealthy Manhattanites Are Knowingly Bringing Wuhan Coronavirus to the Hamptons 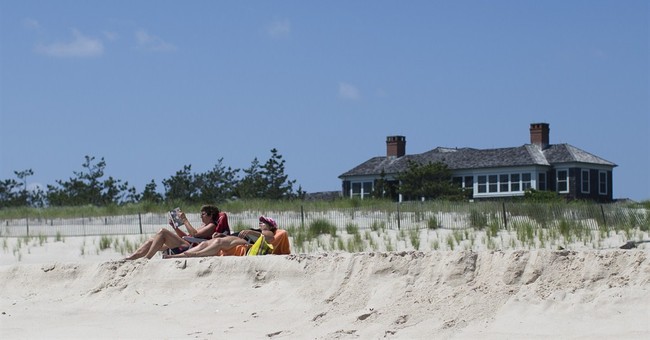 New York City represents over half of all of the 40,000+ cases of Wuhan coronavirus infections in the United States. There are hordes of wealthy people in the city. So, where would Manhattanites go at this time? The Hamptons. And the locals here are not happy. As New York Post columnist Maureen Callahan wrote, it’s all-out class warfare as the elite and entitled are making life hell for the locals. She wrote that these folks, who landscape and tend to the super-rich during the summer months are not tolerant of this spring invasion, where grocery stores are wiped out and ditzy folks refuse to listen to the rules. One woman who tested positive for the Wuhan virus in the city didn’t adhere to protocol. She was told to remain in the city, but hopped on public transportation, didn’t alert anyone of her infection, and arrived at a hospital in the Hamptons demanding admission. Callahan also added that someone flew a private jet into East Hampton and didn’t tell anyone until he landed. One local suggested they “blow up the bridges” to stop the mass influx of city dwellers (via NY Post):

The year-round residents, the locals who serve and clean and landscape for the super-rich in the summertime — and put up with all manner of entitlement and terrible behavior in exchange for good money — are silent no more.

“There’s not a vegetable to be found in this town right now,” says one resident of Springs, a working-class pocket of East Hampton. “It’s these elitist people who think they don’t have to follow the rules.”

It’s not just the drastic food shortage out here. Every aspect of life, most crucially medical care, is under strain from the sudden influx of rich Manhattanites panic-fleeing, bringing along their disdain and disregard for the little people — and in some cases, knowingly bringing coronavirus.

“We’re at the end of Long Island, the tip, and waves of people are bringing this s–t,” says lifelong Montauker James Katsipis. “We should blow up the bridges. Don’t let them in.”

Normally, the haves and the have-nots converge only in summer, and everyone plays their parts. No more.

“A big majority [of the rich] are truly disrespectful, and in my opinion don’t deserve to enjoy Montauk,” says local fisherman Chris Albronda, 33. He wasn’t shocked by the infected woman who deliberately came out here, even after she was told not to.

“That small act reflects a lot of what we deal with in the summer,” he says. “Selfish. Disrespectful. Absolutely horrifying.”

“I’ve seen breathtaking acts of selfishness,” says lifelong East Hamptonite Jason LaGarenne, 42. “I saw one guy walk out [of a grocery store] with a cart full of carrots. Just carrots.

As of last weekend, SoulCycle and Flywheel were packed, as were bars, restaurants, clothing stores and coffee shops. As of Monday, “there was a line out the door at [East Hampton restaurant] Mary’s and Starbucks,” says the Springs resident. “If you’re going to make such a hoopla over leaving the city and hoarding your food, why not stay in your million-dollar mansion on the waterfront? Don’t go to Starbucks! I’m sure you have a coffeemaker.”

The issue is quite simple. The local health care systems are not equipped to handle this influx of people in the offseason. New Jersey Gov. Phil Murphy also made similar remarks concerning folks in New Jersey who are thinking about fleeing to their summer residences along the coast. Don’t do it.