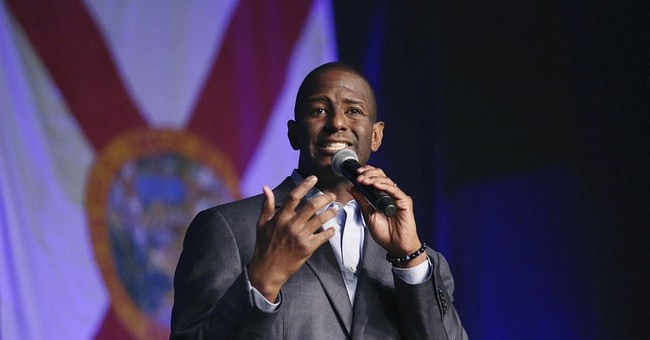 Andrew Gillum has landed himself in quite the pickle. Okay—maybe it’s not the end of the world legally, but it’s sure awkward to have the police show up at your hotel room where there are bags of methamphetamine everywhere (allegedly). There was another man in the room reportedly suffering from a drug overdose. Gillum was insanely drunk, throwing up in the room. He was too drunk to communicate with police (via Politico):

Andrew Gillum, a Florida Democrat who narrowly lost a bid for governor in 2018, was found “inebriated” and vomiting in a hotel room with another man apparently experiencing a drug overdose, according to a police report.

The Miami Beach Police Department responded to an emergency call from the hotel room early Friday morning. Police impounded several clear plastic bags of what appeared to be crystal meth.

First responders provided treatment to Travis Dyson, age 30, who later was hospitalized. He is conscious and in stable condition, according to the report filed Friday.

Aldo Mejias, who had rented the room, told police he arrived at the hotel Thursday shortly before midnight to find Gillum and Dyson “under the influence of an unknown substance,” according to the police report.

Mejias saw Gillum throwing up. Dyson was having difficulty breathing and also began vomiting, prompting Mejias to call for help.

If what the report says is true, Andrew Gillum has come out as Florida Man. https://t.co/B0zVF9pknu

Everyone should respect @AndrewGillum’s privacy as he explains why he was one of three men in a hotel room w 3 bags of meth, too impaired to talk to first responders.

I know what you’re all thinking - this is not very COVID-19 hygienic. #GillumSurge https://t.co/HVjBDNRlZA

Andrew Gillum is retiring from politics to spend more time with his meth.

Former FL Democratic candidate for governor Andrew Gillum was in a Miami Beach hotel room last night where a man had "a possible drug overdose," according to a police report.

The report doesnt say Gillum possessed or used illegal drugs. Here's what we know re: the report 1/x pic.twitter.com/wuCdm91gxp

The hotel room was rented by the other man, so if there were drugs, it's legally hard to charge Gillum w/it

5: Gillum and his advisors didn't return calls or emails for comment. We reached out to the other man and his partner via Facebook and got no responses.

So we don't know exactly what happened beyond this report

Standby for a story

6. Gillum says he was drunk, not on meth: "While I had too much to drink, I want to be clear that I have never used methamphetamines." pic.twitter.com/eGJcbvrq8C

Gillum was not arrested or suspected of having taken drugs. He admits he may have had too much to drink at a wedding. I mean has there been any other time where a prominent Democrat was caught in a hotel room with drugs besides the late D.C. Mayor Marion Barry. The only exception here is that Barry was actually caught on video doing drugs. I don’t think this will impact Gillum’s future. Heck, Barry went to jail on drug charges, got out, and then ran and won the D.C. mayor’s race post-prison. The only thing that may be stopping Gillum from running is Republican Gov. Ron de Santis, whose popularity across the board is sky-high. Forty-six percent of Florida Democrats support the job he’s doing.

In the meantime, sober up, Gillum.