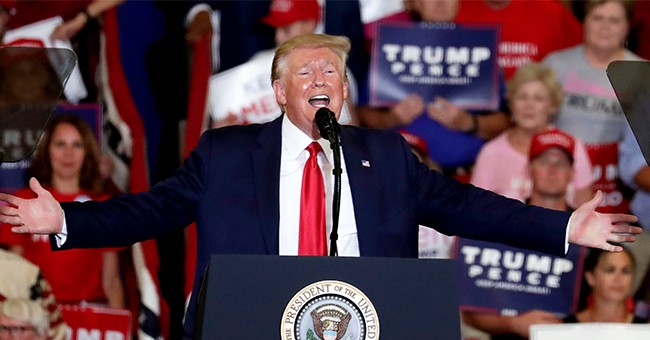 Orange man…bad: that’s the mantra of the Left. Anything President Trump does is evil. The man could find a cure for Ebola and he’d be slammed. It’s precisely the reason why the Left is a joke. And yes, you don’t have to listen to anything they say. Let them talk and make themselves feel like they’re doing a service by lying to the masses on a daily basis. These folks want a recession which would cripple millions of families in order to boot Trump. It’s the same line they take when it comes to illegal aliens. They want these people to be granted amnesty, put on a pathway to citizenship, and then register them to vote Democratic no matter how many American citizens they rape and murder. It’s now crept into farming bills. Yes, farming assistance to be exact to help farmers who are being pinched as Trump tries to hash out a new trade agreement with China. New tariffs went into effect this month on some Chinese goods. China has responded in kind and the Left views this with glee, as it could potentially make some of these rural voters back Democrats in 2020. It’s an easy messaging pitch, but nope—they’re blocking an assistance package in yet another move that gives the finger to middle America (via WaPo):

House Appropriations Committee Chair Nita Lowey (D-N.Y.) is proposing to block the White House request over its farm bailout program, according to a draft of legislation reviewed by the Washington Post, potentially imperiling President Trump’s ability to direct payments to thousands of farmers.

The bailout program was created last year amid complaints from agriculture groups that China had stopped purchasing their crops in retaliation for new tariffs that the White House imposed on Chinese imports. Trump has ordered that billions of dollars in taxpayer funds be paid directly to farmers as a way to offset their losses.

The bailout hadn’t needed congressional approval up to this point, but that has changed.

If Congress does not act, then some of the bailout money Trump has promised farmers could not be paid on the administration’s timeline. On Thursday, a Department of Agriculture spokesman said that the money would still go out, but that the timing of the program could be impacted.

In new legislation to fund the government into November, Lowey left out of the White House request that would allow them to avert the $30 billion spending cap they are expected to hit this fall in the program being used to fund the bailout. As head of the appropriations committee, she has broad power to decide what is included in any spending bill. And lawmakers from both parties are under pressure to pass a new spending bill in the next few weeks, or they will risk a government shutdown on October 1.

Democrats want a shutdown. They want another media cycle where they can bash this administration 24/7. They want another series of stories of these poor government workers supposedly suffering, despite the projected backpay they’re going to receive. Side note, no one cares about government workers. This is just one of many little maneuvers Democrats are making to facilitate a crisis as the 2020 season draws nearer. It’ll also be prime fodder for the Democratic debates whose candidates can then also bash the president for hours.