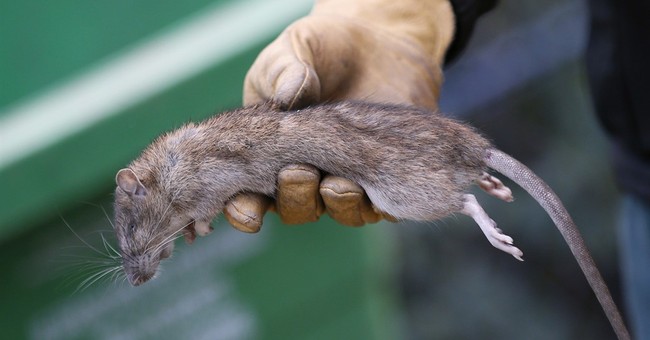 California’s decades-long affair with liberal politics has brought disease—literally. Rats are overrunning parts of the state. It’s only amplified by the rising homelessness crisis. For a region of the country that is smug, wealthy, and condescending to no end about how great they are—they do have a lot of bums in the street, fecal matter in the street, and hypodermic needles in the street. San Francisco is covered in crap. And the solution is quite simple: clean up the damn cities. But that would mean be mean to homeless people or something. Well, they’re ground zero for the rat infestation, which has brought back diseases we haven’t seen on such a daily basis since medieval times. Typhus has broken out. Police stations in Los Angeles were forced to pay fines that soared into the thousands of dollars due to the unsanitary conditions. City hall is running wild with rats. And now the state EPA office in Sacramento was forced to close its outdoor playground due to their rat problem; they were worried about kids getting sick. And what is the state proposing now? Oh, they want to ban rat poison (via WSJ):

There were so many rats scurrying around the California EPA office in Sacramento this summer that the agency had to close its outdoor playground to prevent children from getting sick. After California’s EPA applied rat poison, environmentalists howled that the pesticide could harm species that prey on rats.

Democrats in Sacramento are now moving legislation to ban “second-generation” rodenticides that are more potent than earlier poisons against which rats have developed immunity. “Predatory species, such as raptors, bobcats, and foxes, regularly consume rodents as part of their diet. Poisoned rodents also become more lethargic and exhibit abnormal behavior,” a bill analysis notes. But “data are less conclusive in pointing to [anticoagulant rodenticides] as the specific cause of death in necropsied animals.”

The bill, sponsored by Santa Monica Assemblyman Richard Bloom, would exempt food factories, breweries and wineries from the ban. No doubt Napa Valley vintners and their customers will be grateful. While liberals say the solution is better sanitation, they also protest whenever government officials try to clean up homeless camps or propose building shelters in their neighborhoods.

Low-income folks who live near homeless populations as usual will suffer the greatest harm from the rat-poison ban. If only there were an antidote to California’s toxic progressive politics.

It’s possible that rodents carrying bubonic plague are scurrying around LA. In the meantime, don’t expect California liberals to handle this situation seriously or find a rational solution to this problem. They’re mentally incapable of doing it.