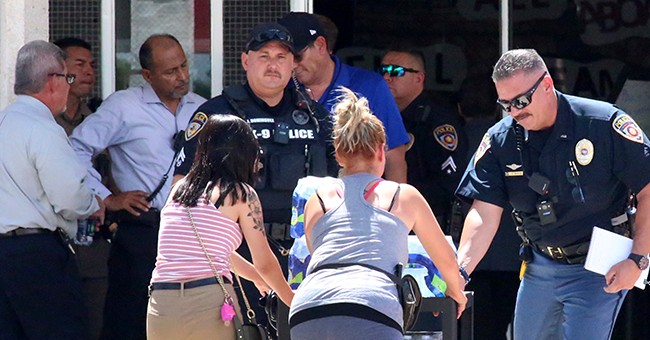 The El Paso shootings were horrific. Patrick Wood Crusius, a crazed man with white supremacist views, gunned down over 20 people at a local Walmart on August 3 and wounded scores more. He was targeting Mexicans. His manifesto is littered with racial overtones, yes, but he noted that his views predated Trump’s 2016 win, that Republicans are terrible, and that a lot of people have to die to in order to maintain the sustainability of the planet. There is an eco-terror angle that makes up the core of his manifesto that the media is ignoring. Eco-terrorism isn’t an activity of the far-right and the anti-Trump media need to deliver uppercuts to the White House that trashes them on a daily basis. Meanwhile, a mass shooter in Dayton, Ohio who is a self-avowed leftist is having his political views masked by the news media because, well, it just doesn’t fit the Left’s ‘all mass shooters might be racist right-wingers’ narrative. The Dayton shooter was pro-gun control, by the way. Anyway, I digress.

President Trump said that the El Paso shooter should get the death penalty. I think many would agree given the heinous nature of the crime, but Mexico’s president does not want that. In fact, he said he’s exploring ways to possibly extradite Crusius to prevent his possible execution (via AFP):

President Andres Manuel Lopez Obrador said Friday that Mexico does not want the El Paso shooter who killed 22 people -- targeting Mexicans -- to be executed, and will seek to extradite him from the United States.

Lopez Obrador, an anti-establishment leftist, said that while Mexico condemns Crusius's "reprehensible, abominable" crimes, it does not want to see him put to death.

"I have given instructions to explore the possibility of requesting this person's extradition," he added.

"We do not want impunity. We want the punishment to be exemplary.... It should serve as an example that human beings must end such acts. These irrational acts of extreme hate are not good for the United States or any country."

Eight Mexican nationals were killed in the shooting. A federal investigation into whether this was a hate crime and an act of domestic terrorism is underway.