Oh, Yes, That Apology From Starbucks To Local AZ Cops Is Quite Different Than How It Handled Its Fiasco In Philly 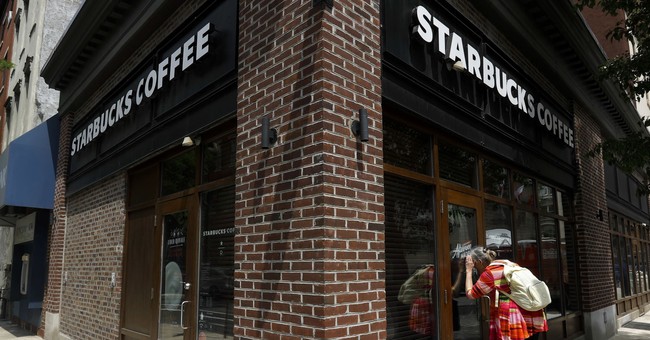 Over the Fourth of July, Tempe, Arizona became a little famous. Some loser snowflake was threatened by the presence of five police officers drinking coffee. This was a triggering event. This person felt unsafe. It was so upsetting to this weak individual that they asked the barista to ask the officers to leave, which they did. The barista and the person who lobbed the complaint haven’t been identified. Starbucks said it was looking into the matter and released an apology on July 6:

Thank you, Chief Moir, for the conversation today.  On behalf of Starbucks, I want to sincerely apologize to you all for the experience that six of your officers had in our store on July 4.

When those officers entered the store and a customer raised a concern over their presence, they should have been welcomed and treated with dignity and the utmost respect by our partners (employees). Instead, they were made to feel unwelcome and disrespected, which is completely unacceptable.

At Starbucks, we have deep appreciation for your department and the officers who serve the Tempe community. Our partners rely on your service and welcome your presence, which keeps our stores and the community a safe and welcoming place.

Our strong relationship with the Tempe Police Department has provided us the opportunity to host several “Coffee with a Cop” events in area stores, which bring residents and police together to discuss relevant issues and find common ground. We look forward to continuing to strengthen our relationship with you, and we agree that the experience of your officers requires an important dialogue – one that we are committed to being part of.

What occurred in our store on July 4 is never the experience your officers or any customer should have, and at Starbucks, we are already taking the necessary steps to ensure this doesn’t happen again in the future.

I will be in Tempe this evening and welcome the opportunity to meet with any of you in person to address concerns or questions.

Don't appreciate @Starbucks asking our #Tempe cops to leave your establishment on the #4thofjuly2019. Several of those cops are #veterans who fought for this country! #ZeroRespect pic.twitter.com/oGaDKhlYX3

Okay, so there was an apology, an acknowledgment of what these brave men and women do in our communities concerning keeping law and order and serving the public, along with the opportunity to meet with an executive VP of the company. They moved quickly. In most cases, that’s how this goes. Recently, a Kay Jewelers in North Carolina landed in serious hot water when a local manager wouldn’t let a sheriff’s deputy into the store to collect his engagement ring because he was armed. He was told that he could leave his service weapon in his car, which is very much against department policy and just plain unsafe. Kay fired the manager and apologized for the error. Yet, over at RedState, Brandon Morse had a different take. Starbucks apologized, yes—but this reaction was quite different than when the company faced a fiasco in Philadelphia in 2018; two black men were arrested presumably for loitering. They were simply waiting there. The Starbucks universe grounded to a halt, some 8,000 stores closed as employees underwent new training, and the CEO hopped on the Gulf Stream to the city of brotherly love to apologize (via Time):

Starbucks CEO Kevin Johnson has apologized after two black men were handcuffed at a store in Philadelphia. The arrests were filmed by a woman in the Philadelphia Starbucks store on Thursday and sparked outrage when the footage was posted on social media.

“The circumstances surrounding the incident and the outcome in our store on Thursday were reprehensible, they were wrong,” Johnson told Good Morning America‘s Robin Roberts about on Monday. “And for that, I personally apologize to the two gentlemen who visited our store,” he added.

When asked why the two men had been arrested in the Philadelphia Starbucks store, Johnson said the store’s guidelines indicated a certain set of scenarios in which the police should be called. But, he added, in this scenario “it was completely inappropriate to engage the police.” He said that Starbucks would be providing more training for its store managers, particularly training against unconscious bias.

For Morse, his take was that the company apologized, but doesn’t consider it to be a big deal at all:

I’m glad that Starbucks apologized for the behavior of one of their employees toward a group of men who wake up every day, put on a badge and a gun and stand between us and societal chaos. An apology was desperately needed in this situation, and Starbucks did the smart thing by ignoring the SJWs who celebrated the kicking out of the officers and making it clear that they understand they goofed.

It can also be true that the response seems light compared to apologies they made in the past. It was just last year that two black men were kicked out of a Starbucks for what was perceived as loitering. In response to the outrage, Starbucks said that they would close down their locations in order to train their employees on racial sensitivity and eliminate their “unconscious bias.” As I wrote last April, when this decision was made, “unconscious bias” usually implies that the person being accused of it is racist without his or her knowledge.

Not only was it a useless waste of resources in the name of optics, it was insulting to Starbucks employees who were essentially called racist. Regardless, Starbucks was trying to look good to the SJW community who are never pleased by anything anyway.

Starbucks, so far as has been revealed, has no plans to shut their stores down for a day in order to train their employees to better respect police. Even the big-wig they’re sending to Tempe to speak to the PD is a lower level than the very CEO who flew down to Pennsylvania when the two black men were kicked out. Unlike that incident, kicking out officers doesn’t seem to warrant that level of response.