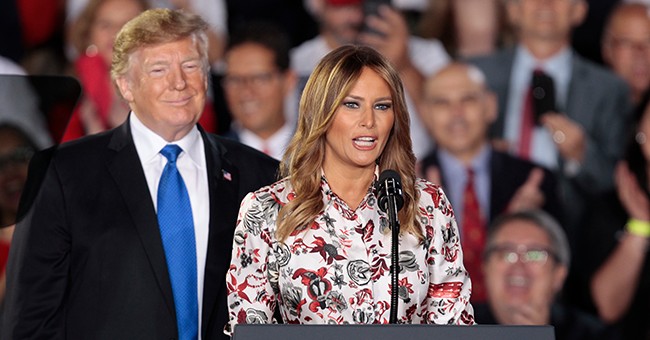 It will all be laid out in an upcoming book from The Federalist’s Mollie Hemingway and the Judicial Crisis Network’s Carrie Severino, but First Lady Melania Trump wasn’t having any of Christine Blasey Ford’s sexual misconduct allegations against then-Supreme Court nominee Brett Kavanaugh. Ford was the star witness for the Senate Democrats who were desperate to sink the nomination by any means necessary. The balance of the Court was at stake. Trump is pushing the courts on a rightward tilt—and he’s been very successful in doing that. The First Lady called Ford a liar (via NY Post):

A new book says that first lady Melania Trump told her husband she thought Christine Blasey Ford was lying when she testified before the Senate Judiciary Committee against Justice Brett Kavanaugh.

“You know that woman is lying, don’t you?” Melania Trump told President Trump, according to “Justice on Trial: The Kavanaugh Confirmation and the Future of the Supreme Court” by conservative authors Mollie Hemingway, a senior editor at The Federalist, and Carrie Severino, chief counsel and policy director of the Judicial Crisis Network.

Hemingway and Severino, whose book comes out Tuesday, use the first lady as an example of an under-reported storyline in the news media — that “millions of other women and men” didn’t believe Blasey Ford, the authors said.

The accuser gave tearful testimony amid Kavanugh’s Senate confirmation hearings about a sexual assault that she said she suffered at the hands of the future justice, when they were teenagers.

This is corroboration that she told people about her contemporaneously-uncorroborated memory — after she first shared/re-surfaced it, 30 years after the alleged incident. All 4 people she places at the party (including her lifelong female friend) do not corroborate her memory. https://t.co/LeU8Y4tzQu

The Kavanaugh fight was one of the most brutal SCOTUS fights in recent memory. It was downright nasty and it weaponized sexual assault allegations no matter how ludicrous. All of the allegations against Kavanaugh were uncorroborated, unprovable, and even totally insane. Julie Swetnick’s allegations were so outrageous—she accused him of running a gang rape ring in high school—that it might have pushed moderate Republican Sen. Susan Collins (R-ME) to side with the rest of her colleagues in voting to confirm the highly qualified Kavanaugh to the Court. Belief is not evidence. No one could corroborate Ford’s allegations. Too much time had passed and even Ford couldn’t remember why she was at this particular party where this alleged assault supposedly occurred, how she got home, who hosted it, or why there was even a party being thrown. The Left tried to “Bork” Kavanaugh. They failed. Sorry, folks, with an allegation as serious as this, it needs to be ironclad for a multitude of reasons. It wasn’t. It had more holes in it than a piece of Swiss cheese. You couldn’t go to court with it, but Democrats could harness it to engage in a vicious character assassination campaign. And yet, Kavanaugh persisted and emerged victoriously. I’m guessing a great many Americans felt the same about Ford: she’s lying. Maybe others felt that she was assaulted, just not by Kavanaugh. That’s possible too. But the lesson the GOP should learn from this fiasco is that they have to stick together, and don’t cave to the Democrats—ever again.