ICYMI: This Is How The Dalai Lama Set The Liberal World Aflame With His Views On A Female Successor 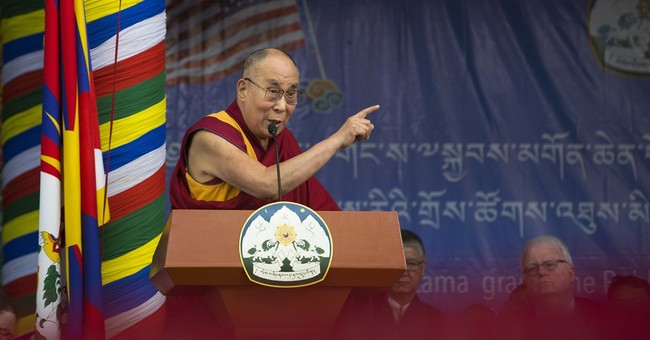 The spiritual leader for Tibet, the Dalai Lama, may have said that President Trump lacked moral principles, but I don’t care. I mean I also disagree. There is many a vice the American people would probably look away from if a) the economy is growing, b) their paychecks have increased, and c) those saying otherwise are abjectly insane. The latter would be the Democratic Party, whose two-night debate unveiled some of the most unhinged outburst of leftism this nation has seen in quite some time. But circling back to the Dalai Lama, he sort of set liberal feminist Twitter aflame, saying that a female successor to him would have to be attractive. He’s made these remarks before. Oh, and he said that Europe should remain with the Europeans. So, you can see where liberals would have…an episode, right? (via CBS News):

This was perhaps the most surprising moment in the interview. I asked the Dalai Lama if he stood by his earlier comment that if his successor was female, she should be attractive.

Ahead of his 84th birthday, the Dalai Lama is once again insisting that, if his successor is a woman, she must be physically attractive. The Nobel Peace Prize winner doubled down on the idea during an interview with BBC News Thursday.

"If a female Dalai Lama comes, she should be more attractive," the 14th Dalai Lama told reporter Rajini Vaidyanathan. If not, "people, I think prefer, not see her, that face."

Vaidyanathan tried to give him the benefit of the doubt. "It's about who you are inside, isn't it?"

"Yes, I think both," he said. "Real beauty is inner beauty, that's true. But we're human beings. I think the appearance is also important."

And then there’s the Europe part (via HuffPost):

The Dalai Lama’s comments about women weren’t the only ones attracting attention. The Buddhist leader responded to a question about letting refugees resettle in Europe by saying a “limited number” is “OK.” But he added, laughing, that the idea of Europe becoming Muslim or African is “impossible.”

He then echoed a far-right talking point: “Keep Europe for Europeans.”

The Dalai Lama has made similar comments in recent years.

Oh, pass me some popcorn.