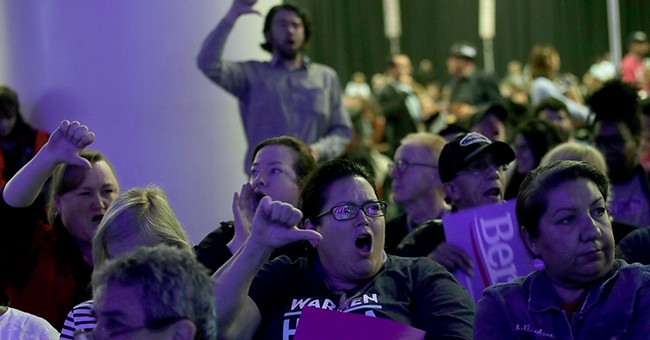 California is the largest state in the country and a bastion of progressivism. It’s the Left coast. Democrats total dominate state politics, and to be honest—the Republicans are not much better. They’re more Democrat-lite. The California GOP is pretty much dead, but that doesn’t mean there isn’t drama. The state legislature was rattled by sexual harassment allegations. In the Me Too era, one such allegation forced California State Party chair, Eric Bauman, to resign. So, at the state party convention, which was held last week, the party was a mess, but no one wanted to admit it. Vice News Michael Moynihan ventured into ground zero, where he saw a public united front, but behind the scenes the makings of a vicious civil war between the establishment and far left wings of the party. 2020 candidate John Hickenlooper was booed for saying socialism wasn’t the way forward. Moynihan also noted that single-payer health care and impeachment were also issues where the party seemed to fracture.

Single-payer has been a hot issue, especially in the Golden State. A single-payer proposal was scuffled by California Democrats in 2017 over concerns about cost and how they would pay for it. This led to Democratic lawmakers being the subject of death threats, even though The Washington Post also trashed the proposal as being one that was ruinously expensive. Then, came the tar and feathering of incumbent Democratic Sen. Dianne Feinstein, who failed to win her party’s endorsement in 2018; she won anyway. Still, it showed the growing tension within the party, especially with its uber-liberal grassroots that share one thing in common with Donald Trump: They want to smash the system. Last year’s convention was equally rambunctious by the way.

And yes, Kimberly Ellis, the failed state party chair candidate who lost by 62 votes last time, was the focus of Vice News’ video in this snake pit. Ellis described the party as one that was tattered, fraught with internal issues and did not, as Vice put it, mince words, running contrary to what other officials were telling Moynihan. Think the meme of the dog holding the coffee cup while the entire room is ablaze around him saying, “this is fine” or better yet the flaming Elmo GIF. In some ways, given what is seen on video, it’s like the California Democratic Party is more like that fake border village across the 38thparallel in the Korean peninsula. It’s quite the tribute to political propaganda. The building may have lights on, but there’s no one home—literally. It was built to entice South Koreans to defect into their hellhole. For California Democrats, they may be selling that the village—their agenda and party cohesion—is fine, but we see the windows…painted on the walls as if actual ones exist there. We see the lights are on, with remarks about how the party isn’t broken, something that Nancy Pelosi’s daughter contends when interviewed, but the bickering behind the curtains could show that there are no walls or floors. It’s a shell.  In short, just because a state achieves de facto single-party rule doesn’t mean drama llamas can overtake it. In fact, that’s a prime environment for corruption and malfeasance to thrive (via Vice News):

Activist candidate Kimberly Ellis wanted to push the party further to the left — which is likely why she lost to labor leader Rusty Hicks on Saturday for the coveted position.

Before the election Ellis had harsh words about the party infighting, calling it a “toxic culture” rife with abuse, bullying, harassment, and retaliation.

But while Democrats were seething behind the scenes, they publicly spoke of a united front. “My hope is that we don’t use our sharp elbows on one another — that we actually save them for the real fights that we have ahead,” Hicks said.

But even after the results came in, Ellis didn’t mince words about her more centrist colleagues. "There are those of us who have a value set that says that we should value people and we should value our planet, that we should be fighting for fairness and justice and equality for everyone. And there are those who want to take a more incremental approach to that kind of change. And I think that was on full display tonight as it was two years ago."

If there is one thing about Democratic bloodsports, they don’t end pretty or quickly.

Mark Meadows: My Aide Is Lying About Me Wanting a Pardon After the January 6 Riot
Townhall
Megyn Kelly explains why a 'first-year law student' could have driven a truck through holes in Cassidy Hutchinson's testimony
Twitchy
Things Get Awkward When Jake Tapper Asks Jamie Raskin for Confirmation of Hutchinson's Story
Redstate
Dr. Fauci Took Some of His Own Medicine, and It Didn't Go Well
PJ Media