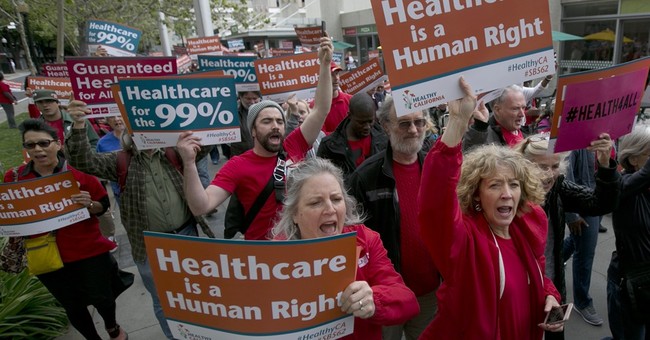 So, the Golden State had a great idea. To make it crystal clear that they’re a cesspool of progressivism, they’re going to try and adopt a single-payer health care system. It would cost $400 billion and the California state legislature had no mechanism to pay for it. The State Senate pushed it through, but it met a legislative death in the State Assembly. Even The Washington Post noted the system’s astronomical price tag, adding that the increases in taxation would be coupled with a decrease in benefits and access to care, which has to happen to keep costs down and ensure universal coverage. That isn’t a trade off the vast majority of Americans are willing to accept. Now, as the California’s first attempt at single payer dies, the backlash from the progressive Left against the state's Democrats has been brutal, with some receiving death threats (via Fox News):

Dems in DC: "We have no power to do anything!"

Dems who control California, world's 6th largest economy: "We have no power to do anything!"

California Democratic lawmakers are facing a brutal backlash from union activists and others on the left after shelving a universal health care bill – a debate that has grown so intense that lawmakers say they’ve faced death threats and other violent rhetoric.

Assembly Democrats publicly decried the “bullying tactics” in a written statement over the weekend, maintaining that lawmakers are committed to improving health care but need to have an “open discourse.”

“In recent days, we have become alarmed and disheartened by bullying tactics, threats of violence, and death threats by a few who disagree with the decision of Speaker Anthony Rendon to postpone the advancement of SB 562,” they said, referring to the scrapped single-payer health care bill. “While it is appropriate for persons of varying views to express concern, disapproval or disfavor about the delay, it is never acceptable to engage in those tactics.”

Rendon announced on June 23 that he was shelving legislation to set up a government-run, single-payer health care system in the state. This prompted an immediate backlash from the California Nurses Association, which had backed the $400 billion plan.

“It certainly wasn’t a bill,” Rendon told The Hill. “There was absolutely no funding attached to a $400 billion proposal, no service delivery mechanism.”

Well, this is certainly a popcorn moment.