Staggering: Venezuela’s Epic Economic Collapse Is So Complete We Have This Figure Hitting…10 Million Percent 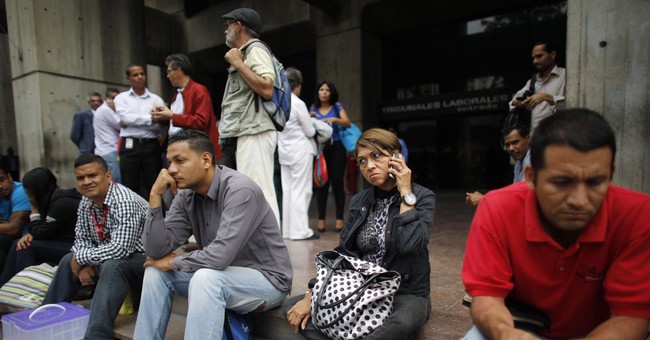 If the Democratic Party wants to run on a full-blown socialist agenda, and it looks like they could especially in future election cycles, then Republicans have the perfect example to show voters concerning its total failure. Yes, we’re talking about Venezuela whose addiction to so-called 21stCentury Socialism, championed by the late Hugo Chavez, had led to one of the most stunning economic collapses in nearly a half-century. It’s downright depraved what has occurred. People are eating out of trashcans, hyperinflation has made mounds of money utter worthless, groceries are now a luxury due to available items and costs, and because of the cost—you have Venezuelans of all walks of life resorting to prostitution for common goods. Even children have been forced into prostitution in order to buy groceries. Basic medicines are scarce. Hospitals are reportedly working in 19thcentury conditions, with basic items like soap, being in short supply. Hungry citizens are breaking into zoos, slaughtering the animals for meat. Outside of war, there hasn’t been anything like Venezuela’s economic fall.

The New York Times recently compiled the list of issues facing the nation. For starters, hyperinflation is about to hit…10 million percent. The shoddy power grid has many butchers hoping they can sell their variety of meats before the end of the day to avoid them spoiling. For the most part, they’re being relegated to selling at shavings and cow hooves since most Venezuelans can’t afford anything else. Oh, and on top of all of this, the rolling blackouts, the hunger, the lack of basic supplies and medicine—you have gangs taking over whole towns. Venezuela is pretty much a failed state (via NYT):

Zimbabwe’s collapse under Robert Mugabe. The fall of the Soviet Union. Cuba’s disastrous unraveling in the 1990s.

The crumbling of Venezuela’s economy has now outpaced them all.

Venezuela’s fall is the single largest economic collapse outside of war in at least 45 years, economists say.

“It’s really hard to think of a human tragedy of this scale outside civil war,” said Kenneth Rogoff, an economics professor at Harvard University and former chief economist at the International Monetary Fund. “This will be a touchstone of disastrous policies for decades to come.”

Venezuela, at one point Latin America’s wealthiest country, has not been shattered by armed conflict. Instead, economists say, the poor governance, corruption and misguided policies of President Nicolás Maduro and his predecessor, Hugo Chávez, have fueled runaway inflation, shuttered businesses and brought the country to its knees. And in recent months, the Trump administration has imposed stiff sanctions to try to cripple it further.

As the country’s economy plummeted, armed gangs took control of entire towns, public services collapsed and the purchasing power of most Venezuelans has been reduced to a couple of kilograms of flour a month.

In markets, butchers hit by regular blackouts jostle to sell decomposing stock by sunset. Former laborers scavenge through garbage piles for leftovers and recyclable plastic. Dejected retailers make dozens of trips to the bank in hopes of depositing several pounds’ worth of bills made worthless by hyperinflation.

Here in Maracaibo, a city of two million on the border with Colombia, nearly all of the butchers in the main market have stopped selling meat cuts in favor of offal and leftovers like fat shavings and cow hooves, the only animal protein many of their customers can still afford.

Venezuela has lost a tenth of its population in the past two years as people fled, even trekking across mountains, setting off Latin America’s biggest ever refugee crisis.

Venezuela’s hyperinflation, expected to reach 10 million percent this year according to the I.M.F., is on track to become the longest period of runaway price rises since that in the Democratic Republic of Congo in the 1990s.

“This is essentially a total collapse in consumption,” said Sergi Lanau, deputy chief economist at the Institute of International Finance, a financial trade association.

And yet, the nation’s president, and Chavez’s successor, Nicolas Maduro, continues to blame America for the economic woes, which is beyond fantasyland talk. Venezuela’s economic disaster is also dragging its local neighbor and ally, Cuba, into the gutter. The island bastion of communism is initiating rationing of supplies across the board due to the aid they’re sending to Venezuela. Socialism fails. It kills. It brings suffering to everyone. That’s the only thing that’s equal about the whole philosophy. We all suffer together. As long as Maduro remains in power, nothing will get better.