As Venezuela Collapses, Scores Of Children Are Dying Of Starvation–And The Government Is Trying To Hide It 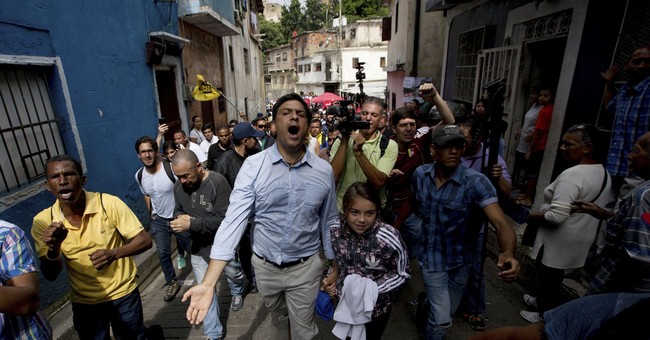 Venezuela was once a beacon of what the late Hugo Chavez called 21st Century Socialism. Oil prices were up; things were going well. Then, things fell apart. The drop in oil prices has been a contributing factor. Venezuelans for a few years now have lacked access to medicine, food, soap, toilet paper, and other basic commodities. They’re eating out of trashcans. Cats, dogs, and birds are being eaten. Even animals at the zoo are being stolen for consumption. There’s a food police that targets people who wait in food lines. That’s bad public relations for the government. The hospital system is in an awful state of disrepair, with soap and gloves being items that are in short supply. As a result, health care in the country has reverted back to 19th century conditions. Even educated people, like doctors and teachers, are resorting to prostitution to feed themselves and their families. Children have begun joining the sex industry to help their families eat. It truly is a horror show.

Yet, The New York Times conducted interviews at multiple hospitals in the country and reported on a disturbing story that death due to malnutrition in the country amongst its children has increased astronomically. The government has resorted to blacking out key medical data to keep this problem buried, with doctors being told to omit malnutrition notes in children’s medical records. It’s a total mess. Prior to the economic collapse, Venezuela only had instances of malnutrition in cases of parental abuse or neglect. Now, it’s because 21st century socialism has failed. It’s because the government knows there’s a serious problem, but isn’t willing to admit this. The Times tracked 21 public hospitals in the country of their story. It’s a lengthy (and horrifying) read, but well worth it.  It also contains some graphic photos of some of the victims, like Kenyerber Merchán, who died of heart failure from malnutrition. He was a little over a year old when he died. Women are getting sterilized to avoid raising children in this hellhole, while more boys join street gangs for food (via NYT) [emphasis mine]:

Kenyerber Aquino Merchán was 17 months old when he starved to death.

Hunger has stalked Venezuela for years. Now, it is killing the nation’s children at an alarming rate, doctors in the country’s public hospitals say.

Venezuela has been shuddering since its economy began to collapse in 2014. Riots and protests over the lack of affordable food, excruciating long lines for basic provisions, soldiers posted outside bakeries and angry crowds ransacking grocery stores have rattled cities, providing a telling, public display of the depths of the crisis.

But deaths from malnutrition have remained a closely guarded secret by the Venezuelan government. In a five-month investigation by The New York Times, doctors at 21 public hospitals in 17 states across the country said that their emergency rooms were being overwhelmed by children with severe malnutrition — a condition they had rarely encountered before the economic crisis began.

“Children are arriving with very precarious conditions of malnutrition,” said Dr. Huníades Urbina Medina, the president of the Venezuelan Society of Childcare and Pediatrics. He added that doctors were even seeing the kind of extreme malnutrition often found in refugee camps — cases that were highly unusual in oil-rich Venezuela before its economy fell to pieces.

For many low-income families, the crisis has completely redrawn the social landscape. Parents like Kenyerber’s mother go days without eating, shriveling to the weight of children themselves. Women line up at sterilization clinics to avoid having children they can’t feed. Young boys leave home and join street gangs to scavenge for scraps, their bodies bearing the scars of knife fights with competitors. Crowds of adults storm Dumpsters after restaurants close. Babies die because it is hard to find or afford infant formula, even in emergency rooms.

“Sometimes they die in your arms just from dehydration,” Dr. Milagros Hernández said in the emergency room of a children’s hospital in the northern city of Barquisimeto, noting that the hospital had started seeing an increase in malnourished patients at the end of 2016.

“But in 2017 the increase in malnourished patients has been terrible,” she added. “Children arrive with the same weight and height of a newborn.”

Before Venezuela’s economy started spiraling, doctors say, almost all of the child malnutrition cases they saw in public hospitals stemmed from neglect or abuse by parents.

The Venezuelan government has tried to cover up the extent of the crisis by enforcing a near-total blackout of health statistics, and by creating a culture in which doctors are often afraid to register cases and deaths that may be associated with the government’s failures.

But the statistics that have come out are staggering. In the Ministry of Health’s 2015 annual report, the mortality rate for children under 4 weeks old had increased a hundredfold, from 0.02 percent in 2012 to just over 2 percent. Maternal mortality had increased nearly fivefold in the same period.

For almost two years, the government did not publish a single epidemiological bulletin tracking statistics like infant mortality. Then in April of this year, a link suddenly appeared on the Health Ministry’s official website, leading to the unpublished bulletins. They showed that 11,446 children under the age of 1 had died in 2016 — a 30 percent increase in one year — as the economic crisis accelerated.

Doctors are censored in hospitals, too, often warned not to include malnutrition in children’s medical records.

“In some public hospitals, the clinical diagnosis of malnutrition has been prohibited,” Dr. Huníades Urbina said.

Of course, President Nicolas Maduro knows there’s a hunger issue, but he’d rather blame the U.S., which is par for the course for chavistas—of which Maduro is a die hard member; he’s Chavez’s successor. The publications added that international aid has been offered and rejected by Maduro’s clowns. In the meantime, as Maduro and his ilk fight ‘imperialismo yankee,’ his people and their children continue to die, starve, and denigrate themselves to survive in their socialist utopia that has become not just a total disaster, but a complete humanitarian nightmare with no end in sight.