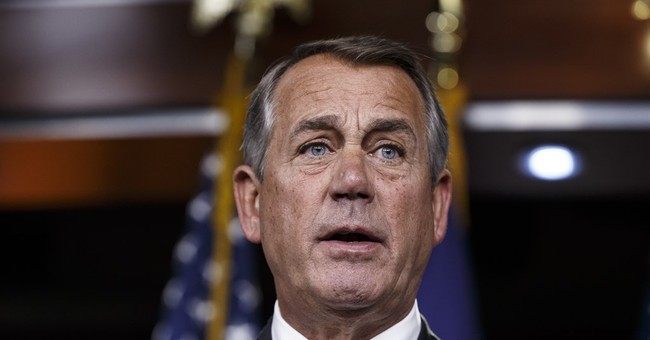 Don’t do it. Just don’t do it. That pretty much encapsulates former House Speaker John Boehner’s view about former Gov. John Kasich’s presidential ambitions. It would mean the former 2016 candidate would have to mount a primary challenge against President Donald J. Trump. Bad idea. For starters, some states might not even hold primaries for the 2020 cycle. We already have our candidate, folks. This is just abject stupidity. And Kasich hails from a state that is now unequivocally Trump country. In a podcast with NBC’s Chuck Todd, Boehner offered some indirect advice to his fellow Ohio Republican colleague (via The Hill):

"No, I wouldn't — I wouldn't bother if I were him," Boehner said during an interview on NBC host Chuck Todd's podcast, "Chuck Toddcast," according to Politico Playbook. The episode is set to be released Wednesday.

Boehner added that Trump has enough support across the country to fend off a primary challenge in 2020.

"There's this 38 percent of America that's very big supporters of President Trump. And you know, they're gonna show up and vote for him," he said.

We already have Bill Weld challenging Trump. The former Republican governor of Massachusetts, who ran as the VP on the Libertarian ticket in 2016 and pretty much endorsed Hillary Clinton in the process, announced his run last week. Does Weld have a death wish or just too much time on his hands? Maybe it’s a combination of both. Maryland Gov. Larry Hogan is reportedly considering a 2020 challengeto Trump as well. At the very least, the moderate wing of the party is showing some chutzpah. though it’s misplaced. It’s an idiotic move. It’s bold; bold, but stupid. Is this the last gasp of breath from the anti-Trump/Trump skeptic wing of the party? Probably.