Bill Weld, Who Pretty Much Endorsed Hillary Clinton In 2016, Will Challenge Donald Trump In 2020 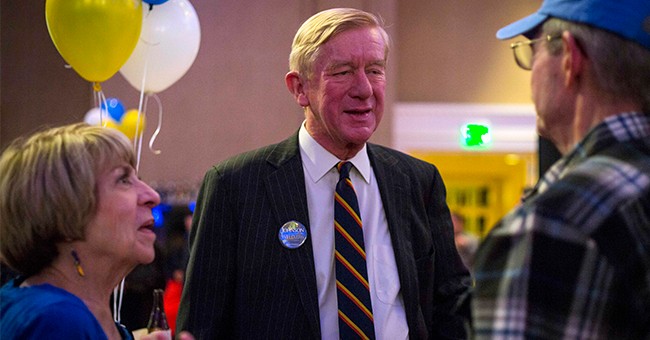 Does Bill Weld have a political death wish? Apparently, he does. And he apparently gives zero “you know whats” about his chances of winning the nomination. The former Republican Massachusetts governor, who ran as Gary Johnson’s running mate on the libertarian ticket in 2016, is looking to unseat President Donald Trump. He’s running for the Republican nomination. He has zero chance, but hey, I guess he’s bored, has time on his hands, or is a glutton for punishment (via WMUR):

Two months after former Massachusetts Gov. William Weld launched an exploratory committee to pursue the possibility of challenging President Donald Trump for the Republican presidential nomination, he is now an officially declared candidate.

Weld made the announcement Monday evening in a more than three-minute video, which can be viewed below. In the video, a narrator recounts Weld's experience leading Massachusetts and shows clips of some of Trump’s most controversial comments.

The video says that Weld was the first Republican governor of Massachusetts in more than 20 years, calls him a “crime fighter” who as governor cut taxes, reformed the welfare program and balanced the state’s budget, while making the state safer. The video shows clips of his television advertisement during his 1990 campaign for the office.

Weld announced his exploratory on Feb. 15 at a Politics and Eggs breakfast at the Bedford Village Inn, calling Trump unstable, vindictive, “a schoolyard bully” and unfit for the presidency.

Weld is going to get beaten like a drum. Trump’s popularity with Republican voters is high. There is just no way he rips the nomination away from Donald Trump. Also, let’s not forget that he pretty much endorsed Hillary Clinton in 2016, while running as the Libertarian VP:

Yeah, that’s all you need to know.