Dude, Shut Up and Go Away: Former GOP Senator Would Rather See A Democrat Win In 2020 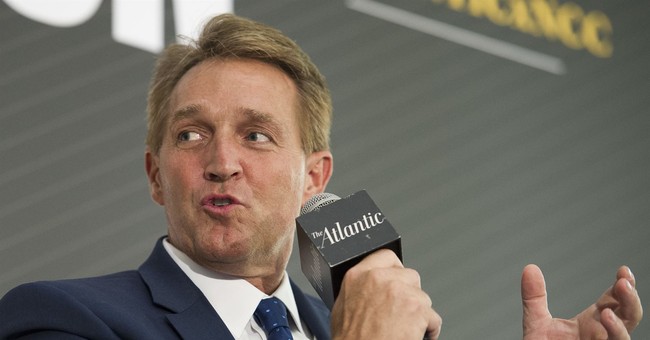 Does this shock us? Does this really shock us that former Sen. Jeff Flake (R-AZ) would rather see this happen in 2020? Flake wants to see Trump lose in 2020. The former Republican senator says it’s best for the survival of the party. Or better yet, what he thinks is best for the survival of the party. This doesn’t come as a shock for a man who completely torpedoed the GOP’s judicial agenda prior to his exit in 2018. Flake made it his business to be the biggest thorn in the side of the GOP and the Trump White House over a resolution to protect the Mueller investigation, which in the end, turned out to totally exonerate the president on Russian collusion. That’s his swan song on the Hill and now this; it’s a day that ends in “y” for Flaky Flake (via The Hill):

Former Sen. Jeff Flake (R-Ariz.) said Thursday that he would rather see a Democrat win in 2020 than have President Trump elected to a second term.

Flake made his comments at a debate in New York hosted by the nonprofit Intelligence Squared. Flake and New York Times columnist Bret Stephens argued that the GOP should not renominate Trump, while Liz Peek and former Kansas Secretary of State Kris Kobach backed the president.

Moderator John Donvan asked Flake if he would rather see Trump lose if he is the party's standard-bearer in 2020.

"Are you willing to lose a cycle for the Republican Party because of the principles that you're arguing?" Donvan asked.

"Oh yes, yes," Flake responded, citing Trump's policies on issues such as immigration. Flake said that while those policies were supported by the president's base, they hurt the Republican Party over the long run.

Yeah, let’s just say it: Flake is a traitor to the GOP. He has compared the president to Stalin. He nuked our push to get federal judges confirmed. And now he’s rooting for the Democrats in 2020 because we all know Trump is running for re-election and the party is behind him. Mr. Flake, go home. You left. And we’ll win without you.