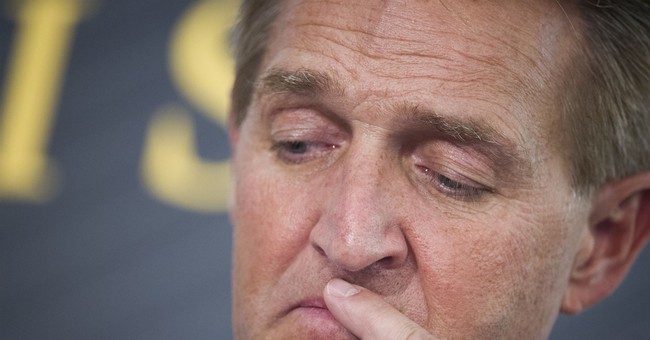 Sen. Cindy Hyde-Smith (R-MI) won her runoff election last night over Democrat Mike Espy in Mississippi, so Republicans have a solid 53-47 majority. No longer will we have to deal with the Murkowski-Collins question when it come sot tight votes of judicial and Supreme Court nominations. We can run the table on paper, but we have a Sen. Jeff Flake (R-AZ) problem. Yeah, Mr. Flake, the perpetual pain in the rear end of the Senate GOP, isn’t budging from his position of blocking Trump’s judicial nominees until a vote on a bill to protect Special Counsel Robert Mueller and the Russia investigation is brought before the Senate floor.

His antics caused the Senate Judiciary Committee to cancel tomorrow’s hearing to advance 21 judicial nominees. Flake is the deciding vote on that committee, and he’s starting to annoy the hell out of his Republican colleagues. Efforts to appease him seem to be a fool’s errand as binding legislation to protect Mueller is the only thing that will cause him to reverse course on his obstructionism over judicial nominees (via Politico):

The Senate Judiciary Committee cancelled a Thursday hearing on judicial nominees as Jeff Flake’s stand for a bill to protect special counsel Robert Mueller continues to wreak havoc in the lame duck session.

The panel was scheduled to advance six Circuit Court nominees, 15 District Court nominees and several bipartisan bills on Thursday to prepare them for possible floor action over the next month. But Flake, who is retiring at the end of this year, is holding firm to his vow to vote against judicial nominees on the floor and in committee unless Senate Majority Leader Mitch McConnell (R-Ky.) schedules a vote on the bipartisan special counsel legislation.

Flake and Sen. Chris Coons (D-Del.) attempted to bring up the bill on Wednesday and were blocked by Republicans that oppose it. Relatedly, Flake voted against Thomas Farr’s nomination to be a District Court judge on Wednesday afternoon, forcing Vice President Mike Pence to break a tie after wavering Sen. Tim Scott (R-S.C.) voted to advance Farr.

Flake’s blockade is annoying senior Republicans by slowing down confirmation of conservative judges in the narrowly divided Senate. But Flake’s tactics have been effective because Republicans have a one-seat majority on the Judiciary Committee and control just 51 votes in the Senate, so he could have tagged some nominees with an “unfavorable” recommendation if Democrats unanimously opposed them.

For those who think Jeff Flake would have won in Arizona, let me remind you that his popularity in is state is straight trash, he barely won his 2012 race, and he most likely would have been picked off in a primary. Jeff Flake cannot leave the Senate soon enough. Oh, and Flake and the late John McCain’s squishy antics seemed to have depressed Arizona GOP enthusiasm, so there’s that aspect. If Flake wants to run in 2020, and there’s some speculation that he’s considering it, he better be prepared to be ripped apart by angry conservatives for going out of his way to torpedo the Republican agenda on the Hill to spite Trump. Oh, and expect to be speaking to just a handful of people who show up at his low energy rallies. Get lost, dude.

Recommended
Remember That '$0.16' July 4th Savings Last Year? Here's How Much It Went Up This Year
Spencer Brown

Flake is causing problems now for GOP and is not buckling. Hearing on 21 lifetime noms cancelled over his judicial blockade https://t.co/9gaYu4eBlB

Remember That '$0.16' July 4th Savings Last Year? Here's How Much It Went Up This Year