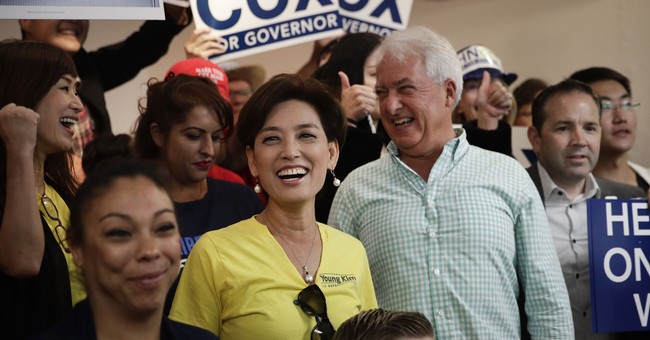 In California’s 39th congressional district, Young Kim is expected to be the first Korean-American woman elected to Congress. It’s history. It’s exciting news for the GOP, who had a rather disappointing election night, where they lost control of the House. Democrats have a slim 10-12-seat majority. But in a district where two-thirds of the population is Latino or Asian, and one-third are immigrants, you’d think this would be territory more favorable to Democrats. Not the case, Kim, a Republican, is 2.6 points ahead of Democrat Gil Cisneros. She leads him 51/48.

Kim is a self-made woman who says she won the lottery when she was able to immigrate here and become an American citizen. Yet, like most Republicans in blue states, she has an independent streak—and breaks from Trump on some key issues, like immigration (via Free Beacon):

"I won the lottery when my family came here and became American citizens," Kim, 56, told the Washington Free Beacon…

During the interview, she stressed her independence from President Trump on the immigration issue even as she strongly backed the administration's economic policies and GOP tax cut and eschewed the way Senate Democrats overplayed their hand when it came to Supreme Court Justice Brett Kavanaugh's nomination.

"Even some of my Democrat friends were coming up to me and saying that was the final straw—that really is what made them change from being Democrat to Republican or no-party preference to Republican," she said of the Kavanaugh firestorm. "They've had it with the dysfunction that they saw in Washington and the instability that they witnessed in the last few weeks [of the nomination process]."

Kim readily acknowledges that the country's immigration system is broken. She opposes sanctuary-city policies but supports a pathway to citizenship for DACA dreamers and decries the Trump administration's policy of separating families who cross into the country illegally.

She also stresses the need for stronger immigration enforcement when it comes to illegal immigrants who are abusing the porous border for drug dealing and human trafficking.

"I don't agree with [Trump's] immigration policy. I've said very clearly, I don't agree with his family separation because that is totally against our family values," she said. "I've always said family migration needs to be strengthened, not taken away—that's how my family came over here."

ABC News has more on her path to becoming an American—and now-soon-to-be-future congresswoman:

Kim immigrated to the U.S. territory of Guam from South Korea in 1975, according to NBC. She later moved to Hawaii and eventually California to attend the University of Southern California. She owned or managed several businesses before making her way into the public sphere in 1990. Kim spent two decades working for outgoing GOP Rep. Ed Royce, first when he was a state senator and later in Congress. She ended her post with him as the director of community operations and Asian affairs.

She was then elected to the California Assembly in 2014, where she unseated an incumbent and became the first Korean-American woman to serve in the California House.

And that is key, her time in the assembly and the connection to the district as well. People know her, which she said was one of the things that could give her the edge in the race (via LA Times):

On the campaign trail, she says, she’s faced questions about the president — his tweets, his policies, his tone. Kim says that Trump’s rhetoric concerns her and that his disparaging remarks about immigrants and women can be frustrating.

“I try to tell them I’m not running to be his spokesperson or represent Donald Trump in the White House,” she says.

As she travels the region, Kim has tried to drive home two major points: that people living here know her, and that she understands their stories. She’s spent decades in the public arena, first as a longtime district staffer to Royce and then as a one-term state assemblywoman. She was once a TV talk show host on Korean-language television.

Kim speaks with a knowing ease about the sacrifices immigrants make for a shot at prosperity.

She often shares memories of interpreting for her parents and picking up cans and bottles on the beaches of Guam — a way station between Seoul and Hawaii, where her family later settled — to help raise money for their church.

“My personal experience of being an immigrant, having gone through what this diverse immigrant community has gone through, struggling,” Kim said. “Those are real life experiences that really helped me understand … the district.”

Kim, who owns a government affairs consulting business, moved to Southern California 37 years ago to attend USC. She lives in Fullerton with her husband, Charles; they have four adult children.

In an interview, Kim maintained that her party has not been captured by one man. “There is no party of Trump,” she said, banging her hand on a table. She’s running, she said, “because I’ve been here, I’ve been working here, I’ve raised my family here, I know the district…. I’m not running for the party of Trump.”

But wait—why haven’t we heard about her until now? Well, she’s doesn’t abide by the liberal ethos of supporting Democrats, which goes double for people of color and especially for women of color. It’s historic, but don’t expect oodles of coverage the way Alexandria Ocasio-Cortez, a far left loon from New York, received from the press. Kim may be more to the left on immigration than Trump, but as a Republican, she’ll receive no love (via Washington Examiner):

Although the heavily diverse and immigrant-heavy 39th District flipped for Hillary Clinton in the 2016 election, Kim is an immigrant running on a pro-DACA and pro-chain migration platform, catering to the fiscally conservative but mostly socially libertarian interests of her district. If the successful immigrant constituency epitomizes the ideal district for Democrats to flip, then Kim is the only kind of woman to keep it red.

The lack of national coverage received by Kim is certainly demonstrative of a quiet, presumably unintentional media bias that is disconcerting nonetheless. There's nothing offensive or unremarkable about Kim that would disqualify her from the same glowing coverage granted to fellow first-timers Alexandria Ocasio-Cortez or Ayanna Pressley. Except for the fact that she's a self-made woman of color with the wrong letter next to her name.

Well, that’s a debate for another time. For now, congratulations congresswoman-elect (via Yonhap News):

Young Kim appeared certain to be elected to the U.S. House of Representatives on Wednesday, becoming the first Korean-American woman to serve in Congress.

The 56-year-old Republican garnered 51.3 percent of the vote against 48.7 percent by Democrat Gil Cisneros in California's 39th district, according to separate tallies by CNN and the Associated Press.

"I thank everyone who supported me and all the volunteers," Kim said at an election night watching event in Rowland Heights, just after her election appeared certain. "This was possible thanks to the Korean community's support."

She gave credit to Royce for helping her "more than 100 percent" and pledged to work hard as a bridge between South Korea and the U.S.

But she also noted that she wasn't elected just for the Korean community and may not be able to serve only their interests.

"Only when I succeed in mainstream society can I return the favor (to the Korean community)," she said. "Because I am Korean, I will make sure to return more than you expect."