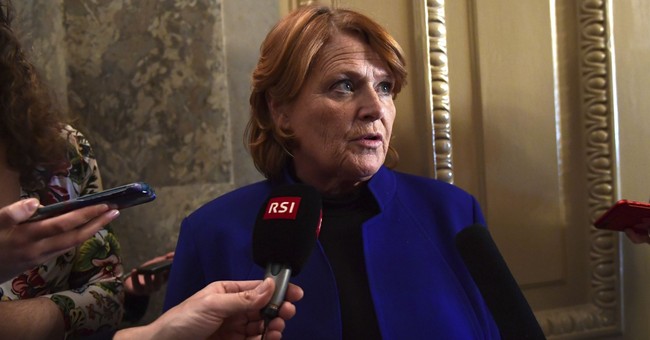 Sen. Heidi Heitkamp eked out a win in 2012, beating Republican Congressman Rick Berg by less than 3,000 votes. That still doesn’t negate the fact that she’s a Democrat from a deep red state and one that was heavily carried by Trump in 2016. It was unfriendly territory to begin with, and with increased partisanship, the odds for her winning re-election were already slim. Every red state Democrat is vulnerable, but she’s cooked. Her Republican opponent, Rep. Kevin Cramer, is leading by double-digits.

The vicious fight over the Supreme Court nomination of Brett Kavanaugh didn’t help any red state Democrat. In fact, it might have placed them in an impossible position. Contrary to liberal writers, there is a Kavanaugh effect impacting those who voted against his confirmation. This last band of conservative-leaning Democrats could’ve voted for Kavanaugh, but then they'd be cut off from the party’s war chest. These Democrats need money—big league. They would’ve been pariahs if they had won. If they voted against Kavanaugh, they would still have access to the Democratic Party’s cash but would’ve had to update their resumes come January because they would all be out of jobs.

It was this fight which caused the Heitkamp campaign to turn into a dumpster fire. Cramer made some controversial remarks about the baseless and unsubstantiated sexual misconduct allegations lobbed at Kavanaugh at the last minute. Heitkamp took out a newspaper ad, which was an open letter directed at Cramer. It listed the names of women who were survivors of sexual assault. The problem was not all of the women had been sexually assaulted, and those who were survivors certainly didn't authorize the campaign to release their names. A group of them are considering legal action. Heitkamp did apologize and took out another ad that might have run aground of FEC regulations, as it did not say which political committee paid for it. It’s over. This was the kill shot.

Now, former Sen. Mary Landrieu (D-LA) is on her way to help out Heitkamp. She’s the “secret weapon”?

The North Dakota Democrat invited former Democratic Louisiana Sen. Mary Landrieu. The two are phone-banking in Fargo for the day. It is absolutely bizarre.

Landrieu is still influential, to be sure, just in Congress, not on the campaign trail. She packed up her Senate office after losing badly in 2014 and moved quickly to lobbying shop Van Ness Feldman. These days, the former senator lobbies on energy issues and otherwise keeps a low public profile, which is why it makes no sense for her to be in North Dakota.

Also, aside from the odd Cajun transplant who has moved north from Louisiana in the last four years, no one outside the world of politics will know Landrieu. Chances are good in deep-red North Dakota that any voter who looks up the former senator won’t like what they find either. Landrieu supported abortion, gun control, and Obamacare while in the Senate. Hardly a history that helps Heitkamp.

And now there’s the Hail Mary pass to Joe Biden (via KVRR):

Former Vice President Joe Biden is coming to Fargo next week to kick off the Bring It Home For Heidi tour for Senator Heidi Heitkamp.

The Democrats will hold a rally at the Fargo Air Museum at 11:00 on November 1st.

The tour will stop in 19 different North Dakota cities over five days.

“Growing up with a big family in the small, working-class town of Mantador, Heidi learned the values that make North Dakota special and make America the greatest country in the world – the dignity that comes with a hard day’s work, respect for our veterans and the need to lend a helping hand to our neighbors. As North Dakota’s senator, Heidi’s never forgotten where she comes from – she’s a tireless voice for rural America and a dogged advocate for North Dakota. Heidi is the real deal – she stands up to both parties to do what’s right by the people she serves, and I hope you’ll help get out the vote and send her back to be North Dakota’s independent voice in the U.S. Senate,” Biden said.

At the most, Biden could move the needle back a few points, but a full 14-16 is doubtful. Heading into the final days of the 2018 elections, Sen. Cory Gardner (R-CO), who is chairing the National Republican Senatorial Campaign Committee, is said to be feeling pretty good right now.

How Did This Ever Get Published? NYT Video Takes a Blowtorch to Blue States
Townhall
'Tell us you're a racist elitist without saying you're a racist elitist': Ana Navarro DRAGGED for tweeting racist AF meme on Thanksgiving
Twitchy
Joe Biden Moves to Completely Screw You at the Pump
Redstate
Whose Land Did Native Americans Steal Before Europeans Stole It From Them?
PJ Media