This GOP Congresswoman Looked Dead In The Water...Now She Could Survive The So-Called Blue Wave 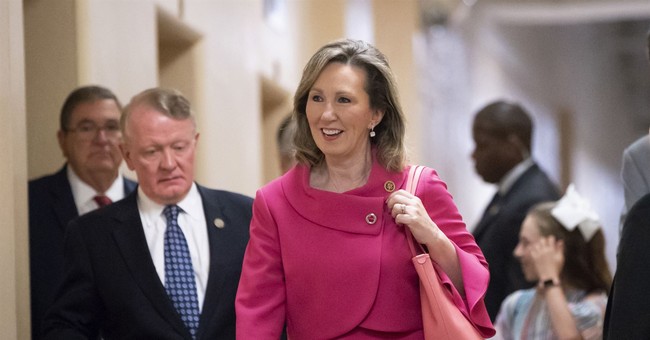 In November of 2017, everyone was highlighting the Democrats’ massive win in the Virginia elections, while also saying that Republican Congresswoman Barbara Comstock was totally screwed. Her district is trending bluish in Northern Virginia. Her political epitaph was already being etched. Here’s what some outlets were saying at the time.

Barbara Comstock: Comstock has held the 10th district, which includes much of the affluent suburbs stretching west from Washington, DC since 2014. The size of the Northam victory in and around Comstock -- he carried her seat by 13 points -- has to make her one of Democrats' top targets heading into 2018

“I would not want to be Barbara Comstock today,” one GOP strategist in Virginia said Wednesday morning.

Democrats are targeting four congressional seats in Virginia next year. By the numbers, their best pickup opportunity is the 10th District, where Comstock has been an elusive target.

Hillary Clinton won the district by 10 points, while Comstock won a second term by 6 points last fall. Inside Elections with Nathan L. Gonzales rates the race Tilt Republican. Gov.-elect Ralph Northam won the 10th District by an even bigger margin than Clinton, according to calculations from Decision Desk HQ.  Comstock is number 6 on Roll Call's list of the top 10 most vulnerable House members in 2018.

"Doesn’t matter if you’re watching CNN, Fox News, or MSNBC: There’s good news for Democrats, [and] this is a nightmare scenario for Republican incumbents, especially in Virginia,” Luján said, pointing to Virginia Rep. Barbara Comstock as an example of an incumbent Republican whose path to victory suddenly looks much tougher.

Well, flash forward a year—and Comstock is still very much alive in her race. She’s far from cooked, folks. She’s actually tied with Democrat Jennifer Wexton in a race where one would think she'd be trailing by double-digits. Comstock spoke with WMAL’s Larry O’Connor last night, where she said that while her opponent trashes her for saying she votes with Trump often, it’s all been for legislation that was bipartisan, like fighting the opioid epidemic. It’s competitive, and Comstock has been known to survive in competitive races (via Free Beacon):

A TargetPoint consulting memorandum shared with the Free Beacon found Comstock and Jennifer Wexton in a dead heat, with each candidate pulling in 47 percent. The poll shows a much more competitive race in a district categorized as leaning Democratic. Public polls from the New York Times and the Washington Post show Comstock trailing anywhere between 7 and 12 points.

TargetPoint surveyed likely voters in eight districts, finding Republicans with leads in five districts and tied in one. The survey, which was conducted in the field from Oct. 14-16, was commissioned by a variety of TargetPoint consulting clients who did not wish to be disclosed.

While Trump has seen his favorability rating on the rise, voters are strongly rebuking House minority leader Nancy Pelosi (D.).

"Not a single district survey showed Minority Leader Nancy Pelosi with positive favorability numbers," TargetPoint found. "Voters with an unfavorable opinion of Pelosi are choosing Republican candidates more than 3 to 1."

The generic ballot advantage still favors Democrats, but in the races that matter, it’s virtually non-existent.

From the NBC/WSJ poll:

From the WaPo/Schar School poll:

The latest survey shows only a marginal change in the race during October, with 50 percent currently supporting the Democratic candidate in their district and 47 percent backing the Republican.

We’ll see what happens, but a massive blue wave—that remains to be seen.