Just Focus On This Part Of The NBC/WSJ Poll...Which Is Good News For Trump And The GOP 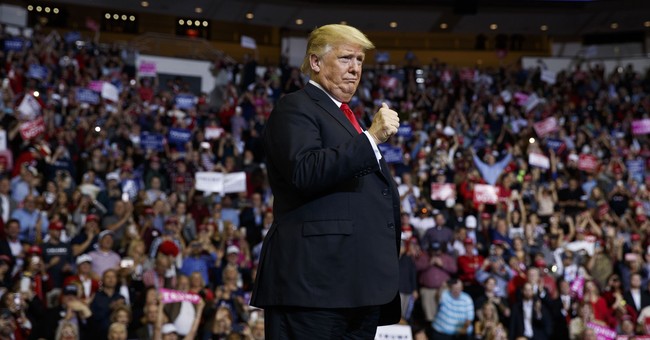 The Wall Street Journal/NBC News and Washington Post/Schar School polls show that despite claims of a blue tsunami that’s going to wash away Republicans, the races that matter are still very, very close. In both polls, battleground districts are within the margin of error. There is also a noticeable Kavanaugh effect that has struck the electorate. Both sides are jacked up over the past fight over Brett Kavanaugh’s Supreme Court nomination, which devolved into one of the most vicious in recent memory. The media is harping on the generic ballot advantage Democrats currently have nationally, but in these critical races—the ones that will decide who will retain the Speaker’s office—it’s vanished (via WSJ):

“It’s a barnburner,” Bill McInturff, a GOP pollster who conducted the survey with Democrat Fred Yang, said of the surge of voter interest. “There’s a switch that’s been flipped...They are engaging in the campaign and the process.”

In the aftermath of the bitter confirmation fight over Supreme Court Justice Brett Kavanaugh, Republicans have closed the once-large gap between their voters’ and Democrats’ interest in the election. Now, 68% of Republican voters and 72% of Democrats say they are very interested in the election—the highest recorded for either party by the survey in a midterm election.

Hand in hand with Republicans’ increased election interest is a rise in Mr. Trump’s job-approval rating to 47%, the highest mark of his time in office, with 49% disapproving of his performance. That is an improvement from September, when 44% approved and 52% disapproved of his performance.

The Washington Post called the Democrats’ lead in these key Houses as “statistically insignificant.”

The latest survey shows only a marginal change in the race during October, with 50 percent currently supporting the Democratic candidate in their district and 47 percent backing the Republican. Candidates from the two parties collectively are running almost even in 48 contested congressional districts won by President Trump in 2016, while Democrats hold the advantage in 21 competitive districts won by Hillary Clinton. The Democrats’ lead in those Clinton districts has narrowed a bit since the beginning of the month.

The battle over the confirmation of Justice Brett M. Kavanaugh to the Supreme Court has energized voters on both sides, according to the poll. About 6 in 10 likely voters in each party say they are more motivated to vote on Nov. 6 as a result of the clash, which included allegations of sexual misconduct against Kavanaugh that drove fierce denials from him and other Republicans. Among independents with no partisan leanings, about half say it has motivated them to vote.

So, it’s all about turnout, which means…this is every election in recent memory. Don’t forget to vote, folks. There are at least 40 races where the Trump tax cuts move voters into a GOP persuadable category, though the party hasn’t really harped on the benefits of its economic agenda as aggressively as it could. President Trump said he’s ready for a new round of middle-class tax cuts, which is a message that needs to be sent to the base, but it might be too little, too late. Still, with Trump’s approval rating surging and Democratic advantages in these races whittled down to nothing, that’s not necessarily the makings of a wave election. The GOP is far from out of the woods, and election night could be a disaster for House Republicans, but I think we’re firmly in wait-and-see territory here. Also, get the hell out and vote if you’re in Republican territory as well.

My model is keyed off of June 30 presidential approval ratings and was D+30. I feel pretty good about that right now. Rs still have a good shot at the House, but would require some breaks.

Most frustrating race for Dems? Maybe #IL12, where Rep. Mike Bost (R) has pulled ahead of prized recruit Brendan Kelly (D) in a coal/steel CD Trump won by 14%. Trump rallying w/ Bost on Saturday. Today, @CookPolitical moved from Toss Up to Lean R.

Blue Wave in a nutshell: Democrats are doing really, really well anywhere that’s within like a 20 minute drive from a Whole Foods Market.