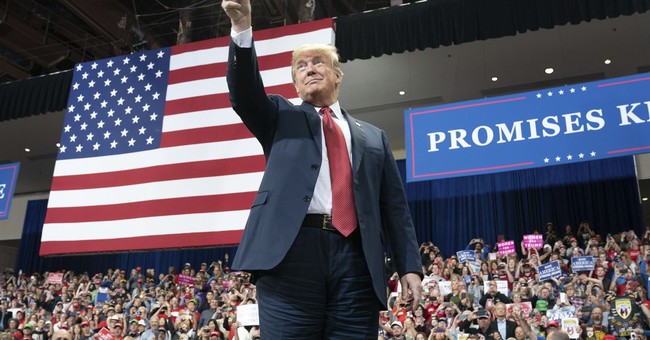 Well, the Kavanaugh fight is over. Associate Justice Brett Kavanaugh survived a vicious character assassination campaign executed by the Left. The scars will remain indefinitely, which is tragic, but in the end—we won. Conservatives won a generational victory. We have a solid majority on the Supreme Court. Now, back to matters that you might have missed due to all the left-wing histrionics over this Supreme Court fight.

We learned from The Hill’s John Solomon that prior to a spy warrant being issued that targeted the Trump campaign, a top Federal Bureau of Investigation official met with Democratic National Committee lawyers. The point is, and what some have already alleged, is that the FBI knew that the so-called Trump dossier was still largely unverified, but it was still used to secure a FISA warrant against former foreign policy adviser Carter Page.

The attorneys in question were part of Perkins Coie, a Democratic law firm the Hillary Clinton campaign used to solicit the services of Fusion GPS, who then hired former British spook Christopher Steele to compile dirt on Trump:

Congressional investigators have confirmed that a top FBI official met with Democratic Party lawyers to talk about allegations of Donald Trump-Russia collusion weeks before the 2016 election, and before the bureau secured a search warrant targeting Trump’s campaign.

That’s the firm used by the DNC and Hillary Clinton’s campaign to secretly pay research firm Fusion GPS and Christopher Steele, a former British intelligence operative, to compile a dossier of uncorroborated raw intelligence alleging Trump and Moscow were colluding to hijack the presidential election.

The dossier, though mostly unverified, was then used by the FBI as the main evidence seeking a Foreign Intelligence Surveillance Act (FISA) warrant targeting the Trump campaign in the final days of the campaign.

The revelation was confirmed both in contemporaneous evidence and testimony secured by a joint investigation by Republicans on the House Judiciary and Government Oversight committees, my source tells me.

“This is a bombshell that unequivocally shows the real collusion was between the FBI and Donald Trump’s opposition — the DNC, Hillary and a Trump-hating British intel officer — to hijack the election, rather than some conspiracy between Putin and Trump,” a knowledgeable source told me.

It’s been a roller-coaster ride for the Department of Justice and the FBI these past few months. There were credible allegations of bias emanating from within the agency, specifically from former top counterintelligence agent Peter Strzok, whose extramarital affair with lawyer Lisa Page caused much embarrassment to the bureau. They exchanged tens of thousands of texts, all anti-Trump and pro-Clinton.

Strzok was a key point person in the Hillary Clinton email probe and the counterintelligence investigation into whether Trump campaign officials colluded with the Russians, which is now being quarterbacked by Special Counsel Robert Mueller. Strzok was removed last summer once Mueller found out about the texts. He was later reassigned to human resources and then fired after his testimony before Congress over these texts.

The FBI also reportedly had a confidential informant who was relaying information about the Trump campaign, an operation that was reportedly signed off under the Obama administration. Of course, top intelligence officials under the old order tried to say that this spying wasn’t…spying. Just an undercover operative that no one knew about covertly feeding the FBI information—but that’s not spying, or something.

They Got Him: Police Arrest Shooting Suspect Who Opened Fire on Fourth of July Parade in Chicago Suburb