Trump Effect? This Is Why The GOP Favorability Numbers Are At Their Highest In Nearly A Decade 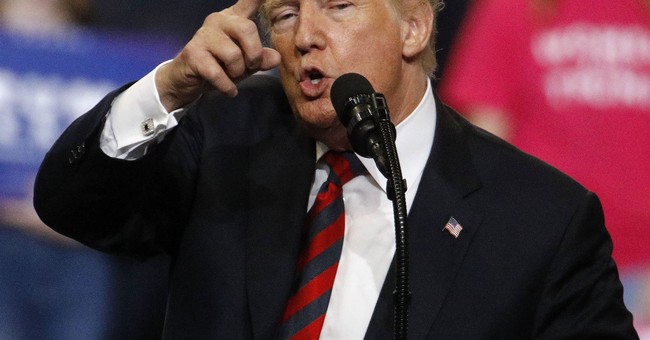 The Republican Party has had its fair share of trip ups. They bungled nixing Obamacare. Immigration is an issue that is a continuous thorn in our side. We cave. We have squishes in our ranks causing agita when it comes to a unified front in pushing policy and keeping this president’s agenda alive on the Hill. So, you would think that the party’s approval rating, which has been less than stellar, would be even low this year. Nope—they’ve reached their highest marks in nearly a decade. The reason: more Republicans are having a favorable view (via Gallup):

Forty-five percent of Americans now have a favorable view of the Republican Party, a nine-point gain from last September's 36%. It is the party's most positive image since it registered 47% in January 2011, shortly after taking control of the House in the 2010 midterm elections. Forty-four percent give the Democratic Party a favorable rating.

The parity in Republicans' and Democrats' favorable ratings marks a change from what has generally been the case since Barack Obama's election as president in November 2008. Republicans have usually been rated less positively than Democrats over this time, with the Republican Party's favorability rating for the last decade averaging 39%, compared with the Democratic Party's 44%.

The overall increase in the favorable image of the Republican Party is a result of a jump in the positive views of Republicans, including independents who lean toward the party. The percentage of Republicans and leaners with favorable views of their party grew from 67% last September to 85% now.

Two other major subgroups that tend to be more Republican than the overall population -- men and those living in middle-income households -- have become more likely to view the Republican Party favorably in the past year.

Gee-maybe that’s because, I don’t know—Trump passed an extensive tax reform package that benefitted the middle and working classes. Paychecks are bigger now, the largest increase in U.S. worker pay in nearly a decade. Three million jobs created with over three million workers receiving bonus checks averaging $1,000 or more due to the better business climate Trump has created. Second quarter growth broke four percent. The economy is booming—and the Trump tax cuts laid down the foundation. Also, Trump delivers upper cuts to the elite news media, something our side never did in past administrations. It’s about time. Better economy, bigger paychecks, more jobs, a fighter, and a cheerleader for America. Yeah, despite some mishaps, overall, the party has been pretty damn good in enacting what this White House wants. That could all go away if the Democrats retake the House, however.