Trump In North Carolina: 'We're Ready...To Do Whatever We Have To Do To Make This Perfect' 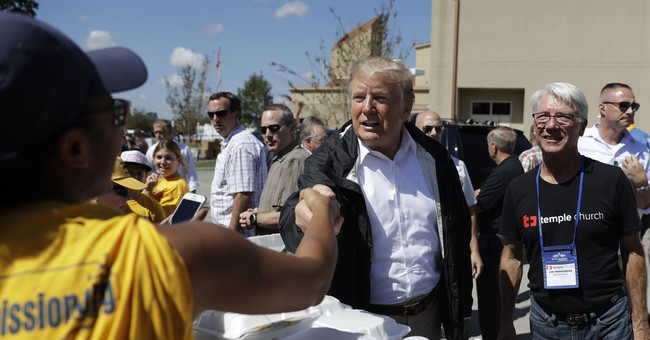 Hurricane Florence is now behind us, but destruction is everywhere in the aftermath. At least 37 people spanning three states have lost their lives. People in North Carolina were ordered to leave their homes, and the city of Wilmington has been cut off due to the immense flooding. Governor Roy Cooper has asked residents to be patient during the disaster relief effort:

With Wilmington still mostly an island surrounded by Hurricane Florence’s floodwaters and people waiting for hours for handouts of necessities like food, North Carolina’s governor is pleading with thousands of evacuees to be patient and not return home just yet.

“I know it was hard to leave home, and it is even harder to wait and wonder whether you even have a home to go back to,” Gov. Roy Cooper said as officials began distributing supplies to thousands of residents of Wilmington, population 120,000.

The death toll rose to at least 37 in three states Tuesday, with 27 fatalities in North Carolina, as Florence’s remnants went in two directions: Water flowed downstream toward the Carolina coast, and storms raced through the Northeast and in to the Atlantic.

With Wilmington still mostly an island surrounded by Hurricane Florence’s floodwaters and residents waiting in hours-long lines for supplies, North Carolina’s governor is pleading with thousands of evacuees to be patient and not return home just yet.

Little boy asks Trump: "Can I have a hug?"

President Trump traveled to North Carolina to assess the damage. He helped hand out hot meals and other supplies to hurricane victims, promising to do whatever is necessary to make the post-hurricane relief effort perfect. Locals expressed gratitude for the president and his leadership, though with how the elite media is with this White House, expect that aspect to be buried (via NPR):

President Trump has arrived in flood-soaked North Carolina, where under sunny skies, he's getting a firsthand look at the devastation that has killed dozens of people and displaced many thousands from their homes across the Southeast.

"We're ready ... to do whatever we have to do to make this perfect," Trump said Wednesday. "Nearly 20,000 federal and military personnel are supporting response efforts," he said. "More than 1.6 million meals have been delivered."

Trump called Florence "one of the most powerful and devastating storms ever to hit our country" and promised federal support for disaster relief. "There will be nothing left undone," he said.

"People don't realize how a very difficult phase is beginning today, with the beautiful sunshine," Trump said. "We'll have it all taken care of."

He spoke at Marine Corps Air Station Cherry Point in eastern North Carolina, where he received a briefing from state and local officials. The military base is not far from New Bern, one of the communities hit hardest by Hurricane Florence and its aftermath.

"Our state took a gut punch, Mr. President, and our people are still reeling," North Carolina Governor Roy Cooper said. Cooper called the storm "epic," "disastrous" and "widespread," noting that 27 deaths have been confirmed by the state and others are under investigation.

Some local officials at the briefing expressed gratitude to the president, not just for the disaster response but for his leadership in general.