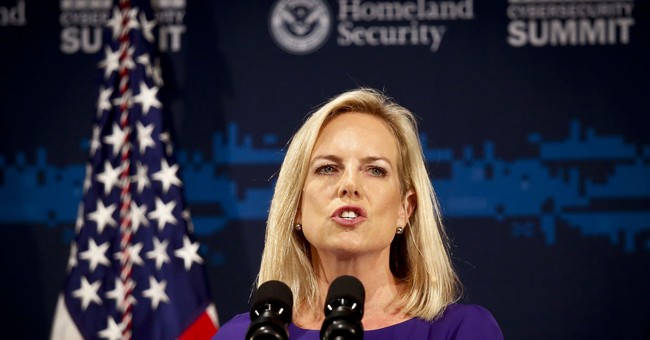 The Trump administration is setting up a showdown with the judiciary over illegal alien detentions, specifically migrant children. Over the summer, Democrats did a good job putting the GOP in a bind over this policy, which was also executed under Obama, concerning the detention of illegal alien families at the border. You separate and detain them. Human traffickers feign familial status with their victims. It’s not a new policy established under Trump. It’s necessary when it comes to border enforcement. Immigration has been a thorn in the side for this administration and both political parties. Neither side has had the courage to enact meaningful reforms. Bill Clinton actually had a solid slate of reforms under Barbara Jordan, but those would not be acceptable in today’s Democratic Party.

The Trump administration announced a new rule Thursday that would allow immigrant children with their parents to be held in detention indefinitely, upending a ban on indefinite detention that has been in place for 20 years.

The rule, proposed by the departments of Homeland Security and Health and Human Services, goes into effect in 60 days and will allow Immigration and Customs Enforcement (ICE) to keep children with their mothers in detention facilities while their cases for asylum play out in court.

A DHS official speaking on the condition of anonymity said the purpose of the rulemaking is to terminate the 1997 Flores settlement agreement that said children could not be held in detention longer than 20 days. The result may mean the issue is taken to appellate courts or even the Supreme Court.

Officials argue that the rulemaking is legal because they will be holding children in ICE facilities that have been evaluated by third parties.

With the Supreme Court nomination of Brett Kavanaugh occurring right now, and it’s still a circus, riddled with left wing protesters and tantrums from Democrats—maybe this slides under the radar.  I doubt it, though. The anti-Trump outrage machine is on steroids as of late.