CNN Host: If You Oppose Mueller's Russia Probe, You're Not Patriotic 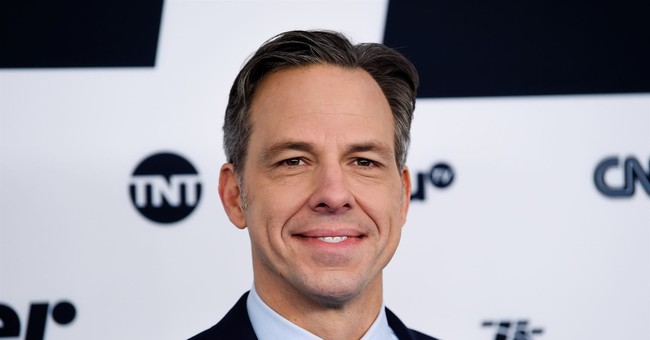 Of all the hosts on CNN, I don’t really mind Jake Tapper. He’s pushed back on liberal nonsense before, even placed top Democrats in the hot seat for past ties to…known anti-Semites. There is one huge negative though that doesn’t relate to politics: he's a Philadelphia Eagles* fan. Yet, back to the point, he has a new book out, The Hellfire Club, so he’s doing some late night television hits. On July 27, he stopped by CBS’ Stephen Colbert’s show, where he said, more or less, if you oppose the Mueller investigation, you’re not being patriotic (via Washington Times):

Here’s the bottom line: the United States was attacked. The United States was attacked by Russia. No, it wasn’t like Pearl Harbor, it was a cyber attack. It was a disinformation campaign, but we were attacked. And there’s this investigation to find out what happened. Now, part of the investigation has to do with Donald Trump and whether or not anybody in his orbit cooperated but there’s this larger investigation about what happened and how can we prevent it from happening again. And there are a whole bunch of people in Washington who are trying to prevent the investigation from going forward. I mean, imagine if somebody tried to prevent the investigation into how Pearl Harbor happened from going forward, you would say that person is not being not patriotic.”

Well, I guess there’s something to be said for the fact that he feels that this isn’t like Pearl Harbor. The liberal news media was frothing at the mouth trying to paint the Russian interference, which really wasn’t successful, as akin to the 9/11 terror attacks and Pearl Harbor. Folks, take a valium and shut the hell up: Hillary Clinton losing an election because she was a terrible candidate isn’t Pearl Harbor, not even close, and it shows once again how liberals have of grasp of history. How many bourbons, or possibly lines of cocaine, would you have to consume to honestly go on live television and say election night 2016 was just as bad as when we lost 3,000 Americans on 9/11. Were families shattered on election night? There was disappointment, no doubt—but cut the crap. It’s so hyperbolic that those who aren’t of this stripe politically think you’re nuts. They’re not wrong. Also, investigation into Pearl Harbor? I think the Japanese Mitsubishi Zeros and the U.S.S. Arizona being sunk were ample evidence that, you know, Japan attacked us. Also, there were thousands of witnesses: the surviving crew of the Pacific Fleet.

Second, can we stop acting like this is the first time we’ve been cyber attacked (of sorts). In 2015, China infiltrated the U.S. Office of Personnel Management and stole the personal data of 20 million government workers. It was so bad that we reportedly pulled our intelligence operatives in China out of fear they could be compromised. Where was the freak out then? Oh, wait, Hillary was supposed to win, right? Trump’s win upset the apple cart, so blame Russia. The thing with the investigation, for me, is that it’s yielded nothing. Zip. Zilch—concerning whether the Kremlin colluded with the Trump campaign in 2016. We would have known. This is the 21stcentury, nothing stays a secret for long, especially something like this. After a year or more of investigations, we have Russian intelligence operatives being indicted by the Department of Justice. Yeah, great—nothing will come of this. Russia won’t extradite these people, so the evidence the DOJ has on these individuals will never be subject to scrutiny. There will be no trial. It will almost be as effete as the Obama administration’s response to the Russian interference, which they knew about and decided to pretty much sit on their hands.

Everyone from sitting Democrats to CNN said Obama either choked or fumbled the ball on this event. Former intelligence officials, like former CIA Director Michael Morell said that the response the administration took was a disaster, too light, a slap on the wrist that will not deter the Russians from trying this again. We are dealing with a slice of the political class who thinks that drinking Stoli vodka or even talking with Russia is akin to treason. One could argue that a neo-McCarthyite mindset has taken over the Democratic Party; irony in the extreme for a party that mocked Mitt Romney for suggesting Russia was our biggest geopolitical foe in 2012. Well, they have nuclear weapons, so that should put them on the list; brain-dead liberals never got that, but since Hillary Clinton lost—Russia is the bedrock of Satan.

So, excuse us, sir if we’re a bit skeptical of an investigation that has yielded zero evidence of collusion, while fanning and flames of a Russophobic frenzy engulfing the Democratic Party, energizing them for the upcoming elections. When nothing arises, maybe it’s time to close shop and save the taxpayer’s money. Also, concerning some aspects of the cyber activity reportedly conducted by Russia; can we really say John Podesta, Clinton’s campaign chair, had his email hacked? He fell for a fake password reset phishing scheme. That’s hardly something you’d see from any unit resembling the Impossible Mission Force.