Voxsplaining: Oh My God, Did Vox Really Just Say This About Trump And The Electoral College 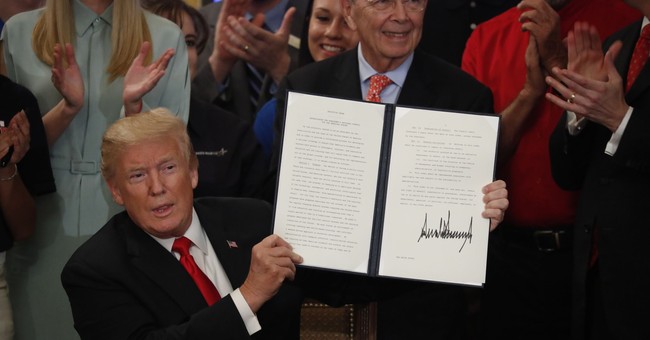 Well, Vox Media has some news for us, guys. Donald Trump won the 2016 election because he clinched the 270 votes needed in Electoral College, despite winning the popular vote. Or how did they put it, “Trump only won the presidential election in 2016 because of the Electoral College.”

Um.... isn't that how EVERY president wins the election? #Geniuses #TheyreSmarterThanAllOfUs https://t.co/R7Cj6mvZxk

In other words, the way every candidate has won a presidential election. There’s voxsplaining, which is equally annoying, and then there’s just plain getting a face full of buckshot. Yeah, Trump won the Electoral College, so that’s why he’s president, huh? Yeah, talk about a ‘no s**t, Sherlock’ moment. After the 2016 election, Vox and other liberal publications went on a tear against the Electoral College, pushing historically illiteracy and other nonsense that blessedly fizzled out because, you know, life goes on and we all have other more important things in life to deal with than hear the whining of over-educated and condescending academics from Hillaryville complain about why how this institution is evil. It’s not. It actually allowed us to abolish slavery—that 1860 presidential election was critical—but that’s already been discussed.

To be clear: Trump only won the presidential election in 2016 because of the Electoral College. https://t.co/0Eiri1qrrp

Clarification: Trump was able to win the election despite losing the popular vote because he clinched narrow wins in key swing states. The Electoral College worked in his favor because it places more weight on swing states and props up smaller states. https://t.co/YVrbEBZJbh

So, let’s hear this out for a second (again):

“The Democrats lost an election, which, frankly, they should have been able to win, because the Electoral College is much more advantageous for Democrats, as you know, than it is to Republicans,” Trump said in the press conference with Putin.

There are several reasons the system isn’t fair to either Democrats or Republicans.

That’s how Trump got elected: He lost the popular vote dramatically but was able to win the election because he clinched narrow wins in Wisconsin, Michigan, and Pennsylvania.

Well, I would also remind people that we’ve only had five electionsin which the winner of a presidential race won the Electoral College, but lost the popular vote throughout our history. Only five times in 242 years, and yet, we still stand as a nation. Second, Wisconsin, Michigan, and Pennsylvania aren’t really swing states. Up until the 2016 election, these states hadn’t voted Republican in nearly 30 years. The last time Pennsylvania or Michigan went Republican was 1988; Wisconsin was 1984. So, what it boils down to is that California, the most populous and a deep blue bastion of America, is what gave Clinton her popular vote edge. Republicans in the state, knowing their vote wouldn’t make a difference, probably stayed home, though it would have added to Trump’s popular vote column, maybe making it closer. We’ll never know. And it’s not the votes from these California Democrats were unheard. It’s the state with most electoral votes and they all went to Hillary Clinton.

The Electoral College does favor Democrats, and people who think otherwise are not watching trends. Florida is about to become a blue state. Virginia is also heading in that direction. Much to liberals’ delight, Trump cannot be president forever, and as we’ve seen with the Obama coalition—transferability to someone else from within the same party is not always a guarantee. Hillary Clinton found that out the hard way. Prior to 2016, Democrats could easily win 242 electoral votes, with the Left Coast and the liberal northeast. Toss in Florida’s count, it gets them to 271. Due to this, some on the right have been urging a National Popular Vote compact, which would guarantee a state’s electoral votes to whoever wins the popular vote. But first, enough states that can get the compact to 270 electoral votes have to sign on. So far, only 11 states (165 votes) have signed on, but it’s gaining traction in red states.

It expands the field, ensures every voter, even those in deep blue states like New York and California, turn out to vote because they can have skin in the game. Democrats in the Deep South can feel the same way. It brings those out of the bunker and allows candidates to run campaigns that speak true to their party since there are no swing states anymore. Democrats can run a crazy left-winger. Republicans can run a true conservative, or a right-leaning populist in the mold of Donald Trump.

I’m still on the fence about this idea. A good point that these advocates for NPV make is that swing state-centered campaigns make for bad national policy. Case in point, No Child Left Behind federalized education policy. It might work for some places, but not everywhere, right? As with any program, but it was able to win the Volvo-driving soccer moms in Hamilton County, Ohio which clinched him the Buckeye State for Bush.

The debate is worth having, but not through this lens. The Left’s criticism is grounded in sour grapes and their inability to get over the fact that Hillary Clinton, a terrible candidate, lost to Trump. My side lost, so we must change everything is childish. And just because your side lost doesn’t mean the nation is in peril. Grow up, shut up, and get out of the way. That’s directed at you, Democrats.