Here We Go: The Electoral College Is Sexist and Racist...or Something 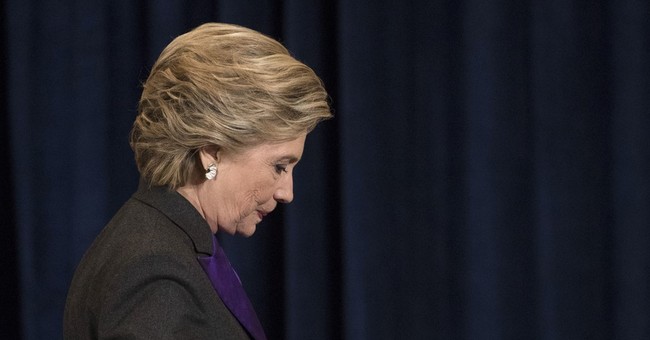 Hillary Clinton did make history this election cycle by becoming the fifth candidate to lose an election by being defeated in the Electoral College, but winning the popular vote. It’s a rare occurrence: five times in our 240-year history. Yet, liberals are now throwing an epic temper tantrum because The Huffington Post and The New York Times said that Clinton would be elected. She won the popular vote. She should be president, right? Nope. That’s not how it works. So besides progressives setting stuff on fire, rioting, and dealing with the greatest triggering event in their lifetime, we’ll have to deal with the idiotic pieces about how the Electoral College should be abolished. Over at Slate, Mark Joseph Stern wrote it should be abolished since its grounded in racism and sexism.

The Electoral College eventually saw reform—yet even after some fine-tuning, the same basic quandary kept emerging. The Civil War Amendments abolished the Three-Fifths Clause, insisting that “representatives shall be apportioned ... counting the whole number of persons in each State” while prohibiting race-based voting discrimination. But the 14th Amendment explicitly reserved voting rights to “the male inhabitants” of a state, denying this newly expanded suffrage to women. As Akhil and Vikram Amar have noted, this sexist exclusion maintained a quintessential problem with the Electoral College: It gave heavily populated states outsized clout in choosing a president—while allowing those states to deny voting rights and representation to a huge portion of their populations.

Obviously, this sexism situation was ultimately remedied by the 19th Amendment. But for decades, the Electoral College allowed states to continue repressing women’s voting rights without consequence.

Most of us are taught that the Electoral College was designed to dilute democracy by forcing voters to choose independent electors, who then chose a president. That is true, but it’s only part of the story. The system was also designed to accommodate and preserve slavery, the ultimate tool of white supremacy—and later served to delay universal women’s suffrage. Today, that first justification is irrelevant, since electors are generally no longer independent. But the second remains all too relevant, because in its current form, the Electoral College continues to dilute the votes of minority voters.

It may be odd to imagine California’s 55 electoral votes going for, say, President Mike Pence, should he win election in 2024. When Republicans win, residents of blue states take some pride in the fact that their electoral votes go to their candidate. But this pride is really quite ridiculous and is far outweighed by the benefits of a system that follows the popular vote. States are a collection of human people, not electors, and the president they choose represents all of them. Abolishing the Electoral College would be a good way to recognize this basic fact of a modern constitutional democracy.

It would be just easier for liberal to be honest with the rest of us, especially themselves: you’re just mad that Donald J. Trump—excuse me—President-elect Donald J. Trump won the election. So, you dig around in our darkest corners to justify getting rid of something that you think prevented Clinton from winning. Keep in mind, that Stern acknowledged that we have an amendments process to change the Constitution if enough Americans demand it, which gave women the right to vote. And it abolished slavery after a bloody civil war. Legislatures, jurists, and elected lawmakers did change with the times, removing or striking down racist laws and were better for it. Yet, the Electoral College dilutes minority voters? Where? They happen to live in the areas where elections are decided: the cities. Philadelphia and Pittsburgh have decided statewide elections in Pennsylvania, which is the cornerstone of the Democrats’ blue wall in presidential contests. Clinton couldn’t get people excited. The same was true of Wayne County in Michigan, where Clinton got some 80,000 votes less in the Detroit area than Obama in 2012. That certainly could’ve erased Trump’s 13,000+-vote lead there to win the state. This brings us back to why this whole debate is stupid. Democrats, you lost to Donald J. Trump. You lost! He was certainly one of the most flawed and vulnerable candidates the Republicans have ever nominated in the modern era, maybe ever, and you couldn’t beat him because Clinton was that much worse. He attracted white working class voters that Romney couldn’t reach, he got millions of Obama supporters to flip their support, he was viewed as outside of the system, whereas Clinton’s 20+-year public service career in Washington, coupled with her six-figure paid speaking engagements fell flat when she tried to cast herself as a working class hero. She was absolutely terrible—and she wasn’t the most qualified to run for the presidency. That’s one of the most outrageous remarks to ever be uttered in this campaign.

In the end, Democrats lost because they didn’t gauge the number of white working class voters, they didn’t know they were the lynchpin of the Obama coalition, she didn’t energize the base, and they ran a campaign that didn’t care about the majority of the electorate. The advantages Trump had with white working class voters would erase Democrats’ gains with college-educated whites and Hispanic voters. Hey, that’s what happens when you’re winning over a large segment of a voter bloc that constitutes 70 percent of the overall electorate. Folks, Clinton’s team thought that going to Norte Dame for St. Patrick’s Day was worth it because white Catholics weren’t worth it. Trump won Catholics. He won the working class. Maybe if Democrats didn’t nominate a sucky candidate under FBI investigation, who actually cared about everyone, not just the uber-liberal segments of the country, she might have won. She didn’t. It wasn’t because of the Electoral College. In fact, where she ran up the popular vote margin is California, which is reliably liberal and whose 55 electoral votes were going for her anyway. California is in no way, shape, or form representative of this country. It’s a cesspool for progressives.

The face of American liberalism just got a pitchfork to its face and they have to deal. It could be a long, brutal road to recovery as the Democratic Party apparatus from the federal to the state and local level have atrophied. Obama might have won twice, but his legacy only ended with the destruction of the Democratic Party.

In reality, the Left is using history to make a case for the end of the Electoral College because they want to call the country racist and sexist, which is their pastime, and to reaffirm their how how they think elections should be decided: by voters who live in the progressive West Coast and the liberal northeast. That’s it. It’s another thinly veiled swipe at the majority of the country that isn’t college-educated and doesn’t speak with learned diction. Screw those flu-over states. They don’t live where things matter. We’re liberal, we’re better, and so we should decide who is president. That’s the mindset. Does anyone here think that 12-16 states, all blue states, should decide the election? Why is it that the voters of the I-95 corridor matter more than those in Ohio? Yes, New York is a reliably Democratic state, but the Electoral College forces candidates to campaign in states where they wouldn’t need to if it were solely by popular vote. Elections where only the most liberal states, who also happen to be some of the most populous, decide who is president can only lead to fracture. Over time, the other America that exists beyond the urban bases of liberal snobbery will split, which is normal. Alas, don’t dwell too much into these matters. Electoral College isn’t going anywhere. It takes a constitutional amendment and Republicans control 69/99 state legislatures. It’s dead in the water. So, liberals should stop whining and accept Donald J. Trump as their president. Sorry kids, you lost. Time to grow up. For Democrats, if you really want to listen to Michael Dukakis on the Electoral College, have at it. Dukakis, the total loser who got clobbered by Bush 41 in ’88, said that Democrats should focus on abolishing the Electoral College. If the Left wants to climb into that tank, go right ahead. We’ll be laughing at the clown show y’all put on for the rest of us to see.