Top Democrat: We're Not Talking About Impeaching Trump...Until We Retake The House 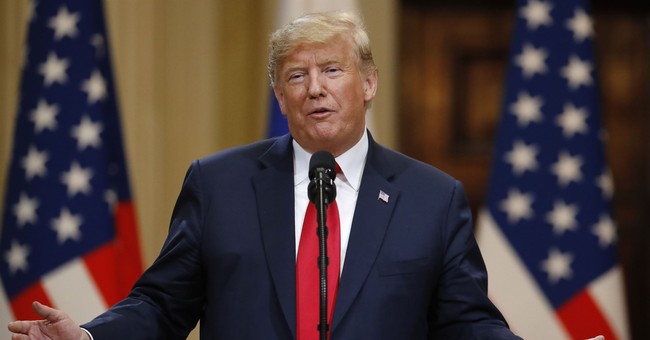 If this isn’t a huge signal flare that impeachment proceedings are likely to begin if Democrats retake the House, I don’t know what is: House Minority Whip Steny Hoyer (D-MD) said the notion of impeaching Trump will not be addressed…unless Democrats retake the House in the upcoming midterm elections. Fox News’ Chad Pergram tweeted about it. There’s been uproar from pretty much everyone on the Hill over President Trump’s Helsinki meeting with Russian President Vladimir Putin, in which many are accusing the president of botching the moment to address Russia’s 2016 election interference. Where it enters crazytown is when people accuse Trump that he committed treason during this presser, which Steny Hoyer has also done (via The Hill):

“I agree with John Brennan, who said that it was nothing short of treasonous,” Hoyer told reporters in the Capitol, referring to the former CIA director.

“It is the duty of every patriot who loves their country to stand up and speak out against this dangerous and dishonest behavior,” he added. “The emperor has no clothes, no ethics, no integrity, no common sense.”

With his comments, Hoyer became the highest-ranking Democratic lawmaker to call Trump's behavior "treasonous." But Hoyer also stopped short of urging impeachment hearings against the president, as some liberal members of the Democratic caucus have been urging for months.

Hoyer on if not pursuing impeachment fails to adequately address concerns by progressives in the Democratic party:
I think we speak to that wing of our party every day by focusing on health care..people’s minimum wage:::clean water for the environment

Hoyer on why not seeking impeachment or other sanctions of the President now:
There will be time enough to address those issues once we take control of the House back

Hoyer on why Democrats should wait to focus on potential impeachment:
We need to focus on taking back the House to save our country, its soul.. over the conduct of this administration

The focus should be retaking the House. Yeah, we get it, but impeachment fever has been long simmering since Christmas. Around that time, Rep. John Conyers (D-MI) was given the boot over allegations of sexual harassment. He was the top Democrat on the House Judiciary Committee. Following Conyers’ resignation, Rep. Jerrold Nadler (D-NY) took his spot; Nadler is a reported constitutional law expert. According to The Washington Post, this was part of the groundwork for an impeachment fight. Forget the end of the Trump agenda should Democrats retake the House, the hearings over porn payments with Stormy Daniels, Russia collusion, and other nonsense will be unending. It’ll be a two-year drumming of the Trump White House, punishment for beating Hillary Clinton in the 2016 election. Democrats should just say it: they want to impeach the president. But it’s an overreach. They know it is, though their base salivates over this moment. All the more reason for Republicans to get out and vote in November.