The War Is Over: Mulvaney No Longer Has This Headache At The CFPB 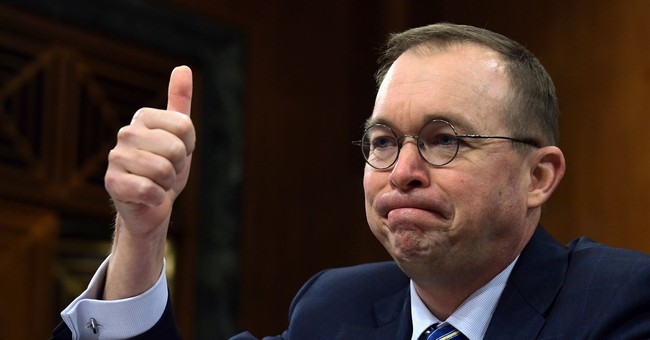 Office of Management and Budget Director Mick Mulvaney is no longer saddled with this headache: the leadership challenge at the Consumer Financial Protection Bureau is over. The OMB director has been in charge of the CFPB since last November, which turned into another front in the resistance war against the Trump White House. Then-director Richard Cordray resigned last year to prepare for his Ohio gubernatorial run. His deputy, Leandra English, thought she would take the reins, but the CFPB is within the executive, so Trump tapped Mulvaney to head the agency until a replacement could be found. English and Mulvaney then engaged in a prolonged legal battle over who is captaining the ship. In the end, the court ruled that Mulvaney would be acting director; English subsequently filed a lawsuit.

In the meantime, there was reportedly a group of rebel CFPB workers, calling themselves “Dumbledore’s Army,” using encrypted devices to communicate. Mulvaney has recently fired the CFPB’s advisory board after some members started to lob criticism his way. In June, a federal judge ruled that the CFPB’s structure was unconstitutional. Now, English is resigning from the CFPB and dropping her lawsuit aimed at blocking Mulvaney’s appointment as acting director (via LA Times):

Leandra English is dropping her legal fight to temporarily lead the Consumer Financial Protection Bureau and will step down as the agency’s deputy director, she and her attorney announced Friday.

English said in a statement that she made the decision in light of President Trump’s nomination last month of Kathy Kraninger to be the CFPB’s permanent director. English said she will leave the bureau next week and told her bureau colleagues, “It has been an honor to work alongside you.”

English went to court last year after Trump appointed Mick Mulvaney as acting director, arguing that the Dodd-Frank law mandated that as deputy director, she — not a new appointee — should take over as interim chief.

After losing her attempts to get a federal judge to issue a temporary restraining order, then a preliminary injunction removing Mulvaney, English appealed. A three-judge panel of the U.S. Court of Appeals for the D.C. Circuit heard the appeal in April but has yet to rule.

Congressional Democrats and consumer advocates had backed English in her fight against Mulvaney, who was an outspoken critic of the bureau and has moved to scale back its aggressive enforcement since taking the temporary reins in November.

“From the earliest days of the CFPB, Leandra has directed her passion and formidable skills to building a strong, professional agency that stands up for consumers,” said Sen. Elizabeth Warren (D-Mass.), who originally conceived of the agency as a law professor and helped launch it as an aide to President Obama. “I’m grateful for her service and wish her the best in her future endeavors.”

Now, who funded the lawsuit? We still don’t know. Her lawyer, Deepak Gupta, said that English wasn’t footing the bill, but didn’t say who was funding the effort. The Free Beacon has more:

It is still unclear more than four months later who is paying for the lawsuit filed by Leandra English against the government to install an Obama political appointee as head of the Consumer Financial Protection Bureau.

English's lawyer Deepak Gupta revealed last fall that English was not paying for the lawsuit herself, but he would not disclose who the mystery funders were.

"I don't think it's appropriate for me to be talking about that on TV right now," Gupta told CNBC. "I think that's something that should be addressed by ethics lawyers who have studied this and are setting up a structure."

Ethics lawyers have yet to come forward with details of the payment "structure."