Analysis: The Law is on Trump's Side in the CFPB Leadership Dispute. He Should Fire the Lawless Coup Plotters. 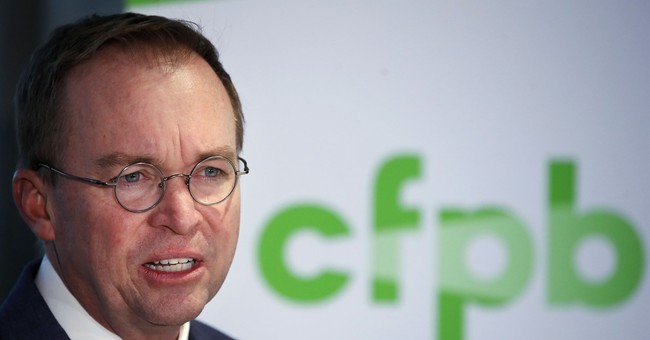 Leah has been covering the unfolding drama at the Consumer Financial Protection Bureau, a powerful and shockingly unaccountable agency designed by Elizabeth Warren created by Democrats' Dodd-Frank bill.  Its longtime director -- who, finally, was legitimately confirmed in 2013 after President Obama's unconstitutional and unanimously-overruled 2012 recess appointment -- resigned from the CFPB late last week, ahead of an expected gubernatorial run in Ohio.

As a result, there was a vacancy at the top of an executive agency.  Under the law, President Trump has the authority to fill that vacancy.  But that's not how the Left sees it.  They're arguing that the CFPB is so "independent" that the president and Congress have virtually no say over its actions or leadership decisions, which is why the outgoing director schemed to appoint his own chief of staff as his successor.  She has sued Trump and Trump's legally-installed interim director, Mick Mulvaney, claiming to be the agency's rightful leader.  She is not.  Here's former federal prosecutor Andy McCarthy:

Some legal questions are tough. The question of who should lawfully be considered the acting director of the Consumer Financial Protection Bureau is not one of them. President Trump unquestionably has the power to name Mick Mulvaney (his Senate-confirmed budget director) to the position, and he has done so. The lawsuit seeking to block this appointment, filed by the CFPB’s deputy director Leandra English — who hopes to take the job herself — is frivolous and offensive...Cordray was quite explicitly attempting to ensure that he, rather than the president, would choose his successor. Under the aforementioned CFPB statute, the deputy director serves as the director “in the absence or unavailability of the director.” Cordray was paving the way for English to argue that his resignation as director creates an “absence or unavailability” that makes her the director as a matter of law.

This is an absurdly strained reading of the statute. What Cordray has created is a vacancy. He is not merely absent or unavailable in the commonsense, temporary understanding of these words; he is gone...Although its progressive champions tout it as “independent,” the CFPB statute explicitly establishes it as an “Executive agency” as that term is defined by federal law. (The definition, in section 105 of Title 5, U.S. Code, includes “independent establishment[s].”) Under the so-called Vacancies Act (i.e., the Federal Vacancies Reform Act of 1998), “if an officer of an Executive agency... whose appointment to the office is required to be made by the President, by and with the advice and consent of the Senate, ... resigns,” the president has the authority to name as acting director a currently serving federal officer who has been confirmed by the Senate.

McCarthy further recommends that "deputy director English ought to be fired for insubordination."  I agree.  She is attempting a lawless coup at CFPB, flouting the law in pursuit of arrogating of power and implementing a hardcore ideological agenda.  She not only deserves to be deposed as fake "leader" of the agency; she should be dismissed from it altogether.  I happen to believe that CFPB is an abusive and unaccountable (and unconstitutional, according to a federal court ruling) leviathan, designed as such as left-wingers, that should be either reformed beyond recognition or shut down completely.  Director Mulvaney's deep skepticism of the agency is warranted and correct.  But that is a separate issue from the narrow legal question of who is authorized to determine the CFPB's interim director.  The answer is: President of the United States Donald Trump.  The former director is not "absent or unavailable;" he has resigned the post permanently.  The Federal Vacancies Reform Act is therefore the relevant statute.  Writing at the Washington Post, law professor Jonathan Adler summarizes the situation and runs through the arguments on both sides of this dispute.  Among the things he notes is this key piece of information:

Interestingly, English is being represented by private counsel. According to Reuters, CFPB general counsel Mary McLeod, who was appointed by Cordray in 2015, thinks the Trump administration has the stronger legal claim and has written a memo to this effect.

Got that? CFPB's own lawyer is siding with the Trump administration in this fight, which is why Ms. English was reduced to obtaining outside counsel in her lawsuit. Mary McLeod was hand-selected by the recently-departed, aggressively 'left-wing' director, who heaped praise upon her "tested judgment" and "wealth of experience" in 2015.  The law is pretty clear in this case, yet many Leftists are latching onto this quixotic stunt as their latest means of signaling hair-on-fire "resistance" to the Trump presidency.  They frequently lament how the president's actions are "NOT NORMAL!" and shouldn't be treated as such.  Well, attempting to usurp the president's statutory power to fill executive vacancies is not normal.

In a misplaced effort to fulminate over the Trump administration's "lawlessness," they are leaning on embarrassingly flimsy arguments to justify actual lawlessness.  Trump is right, they are wrong, and those who've participated in this plot from the inside of CFPB should lose their jobs.  I'll leave you with this argument, which posits that the Left's open contention that CFPB was intentionally designed to be insulated from the rule of law -- with elected officials prevented from wielding any control over the machinations of its bureaucrats or succession of its leadership -- is strong evidence that the entire agency is unaccountable and unconstitutional:

I wonder if the folks trying to block Mulvaney's designation as Acting CFPB Director realize that this episode actually *highlights* why the Supreme Court should hold the CFPB's structure unconstitutional, as the DC Circuit panel did in PHH v. CFPB.