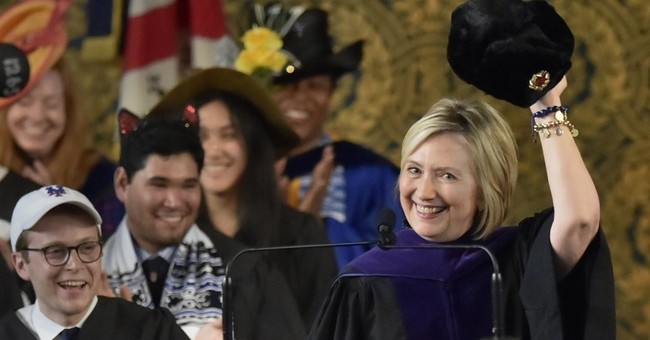 Yeah, it was a bit self-deprecating. It was light-hearted because it was a commencement address, but let’s be honest: Hillary Clinton cannot let her 2016 defeat go. And it’s bordering on insanity. Okay—maybe not insanity—but it’s pretty damn pathetic. She’s not alone. All of her voters seem to have devolved into frothing rabid animals, parroting anything that could be viewed as Russian collusion. That’s how Clinton lost, you see. In this LSD-laced alternate reality, the Russians were able to figure out how to alter vote counts, know who exactly would be voting for Clinton and switch them to Trump, bypass all the protocols to ensure voter integrity, and even alter paper ballots through…mind control? After over a year of investigating by Special Counsel Robert Mueller and Congress, there is no evidence of Russian collusion. It’s a liberal unicorn. It doesn’t exist.

Yet, the jokes keep coming. While delivering an address at Yale, Hillary, the former first lady and two-time presidential loser who will never be president, donned a Russian hat (via NTK Network):

“I am thrilled for all of you, even the three of you who live in Michigan and didn’t request your absentee ballots in time,” Clinton said.

Clinton then noted how many of the graduating students were participating in the Yale Class Day tradition of wearing silly hats.

Then Clinton whipped out a hat of her own, a hat which looked like one that was worn by soldiers in the former Soviet Union.

“I brought a hat, too — a Russian hat. Look, I mean, if you can’t beat’ em, join’ em,” Clinton said, while showing off the hat to the students.

Democrats want this lady to go away, some are more quiet about this, but who really wants a two-time loser trying to act like she’s the political standard bearer for the party. She’s not. The party is now more far to the left—and it’s most active and vocal members are decidedly anti-Clinton. It’s time to move on, but there she is, Lady Macbeth, rehashing the old wounds of 2016 while trashing fellow Democrats, the DNC, James Comey, the FBI, the media, Russia, President Trump, Trump voters, sexism, misogyny, Obama, Biden, and Bernie Sanders. But remember, it’s not her fault she lost. Well, it’s her fault, but these folks are to blame as well. Her tantrum seems to be an unending tantrum. Does she honestly not know how she blew it? Does she not know that not having an economic message, shunning white working class voters, not going as aggressive in the Rust Belt, calling half the country deplorable, and not having political skill might lead to an electoral defeat? I’m preaching to the choir, but you all know what the answer is to this. Say what you will about Bill Clinton and Barack Obama, they had political skill. They could cobble together winning coalitions. They could win elections. Hillary not so much and please—don’t mention her 2000 Senate win. She was in deep blue New York against a weak GOP candidate. I get that you never ever going to be president can be something that gnaws at one’s soul, but she’ll be fine. There should be no tears for a limousine liberal losing an election. At the same time, this is a textbook example of someone who can't let it go.