Oh, So We Now Know How Claire McCaskill Voted On Trump's CIA Nominee 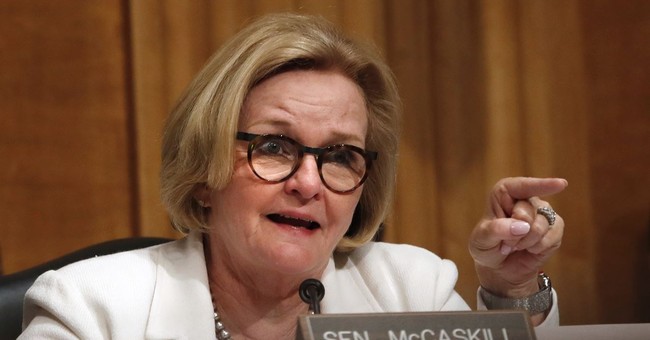 It’s not like we’re not going to find out, senator. Sen. Claire McCaskill (D-MO), one of the most vulnerable red state Democrats running for re-election, fled to the bunker when asked about Gina Haspel, President Trump’s nominee for CIA director. Now, we finally learn that she voted against the first female director of the agency. Haspel was confirmed by a 54-45 vote. McCaskill was not one of them (via Kansas City Star):

Sen. Claire McCaskill opposed the confirmation of Gina Haspel Thursday as director of the Central Intelligence Agency, citing concerns about Haspel's involvement in alleged torture of detainees during the George W. Bush administration.

The Missouri Democrat said she agreed with Sen. John McCain, R-Ariz., that Haspel should not be confirmed to head the CIA. The Senate confirmed Haspel, 54 to 45. Six Democrats backed the nomination.

McCaskill wasn't one of them. “Given the nature of the CIA’s work, the agency receives little oversight. I need to have confidence that the person running it has the instincts and judgment to make decisions in line with our country’s moral compass," McCaskill said after making her position known.

"I agree with many in the military and my friend and colleague Senator John McCain — the only United States Senator who understands torture in a way I hope no American will experience ever again — that the CIA needs a leader who is willing to take a stand when the policies don’t reflect our values.

"While I respect Ms. Haspel’s service and sacrifice, after meeting with her and reviewing classified documents, I do not think she is that person.”

This is bush league. Haspel has a career as an intelligence operative and official that spans over three decades. She’s eminently qualified. The Obama intelligence team heavily endorsed her, including former CIA directors Michael Morell, John Brennan, and Leon Panetta. And therein lies the hypocrisy; both Brennan and Haspel were top officials at CIA when the Bush enhanced interrogation program was in effect, though virtually every Democrat, and John McCain, voted to confirm him. With Haspel, it was an appalling circus show for their left wing base. McCain’s letter opposing Haspel’s nomination was even a more absurd. In the end, it was for nothing, as Sens. Joe Donnelly (D-IN), Joe Manchin (D-WV), Heidi Heitkamp (D-ND), Bill Nelson (D-FL), Jeanne Shaheen (D-NH), and Mark Warner (D-VA) all voted to confirm her.

Still, for a brief time, there was doubt, given that McCain and Sen. Rand Paul (R-KY) were in the no camp—and McCain was unable to vote in any situation due to his fight with brain cancer.

So, what is this? Claire goes centrist, independent Democrat for one day, and then becomes a partisan resistance Democrat the next? This was an easy yes vote. The only people who truly care about the so-called torture that occurred during this time are liberal academics, hippies, and the faculty at UC Berkeley. Above all else, Americans want to be safe. Officially leaving a CIA director post open is not acceptable. Haspel said enhanced interrogation isn’t coming back. If Obama had nominated her, not only would her nomination be hailed as historic (it still is), but Democrats would have nodded their heads and voted yes, but because Trump picked her—she’s the spawn of Satan.

Does Claire think this could be an issue? Either she does because she didn’t tell anyone how she was doing to break until minutes before the vote, or she’s just playing it safe due to her vulnerabilities. She’s solid on fundraising, but that won’t be worth much if she can’t mobilize the base in her state. Right now, black voters aren’t impressed with her, and she’s bringing in Sen. Cory Booker (D-NJ), a potential 2020 candidate, who opposes McCaskill on one of her pet issues: lowering the costs of prescription drugs. Booker also said, more or less, that he can empathize with Trump voters because he’s read books about them. Yeah, I’m not so sure that’s the right message: how do you do, fellow white rural voters. But Claire needs all the help she can get. Her silenceon the benefits her state is reaping from the tax bill is another issue.

The FBI Lied to a Judge So They Could Bust Open Thousands of Safety Deposit Boxes
Townhall
Tammy Bruce & Joe Concha share some ratings info about Chris Wallace's premiere show on CNN (Hint: 'OUCH')
Twitchy
Woman's Disturbing Reaction to Man Calling Her out for Wrongdoing Shows an Infantilization of Society
Redstate
Now the Commies Want to Abolish Your Kitchen
PJ Media