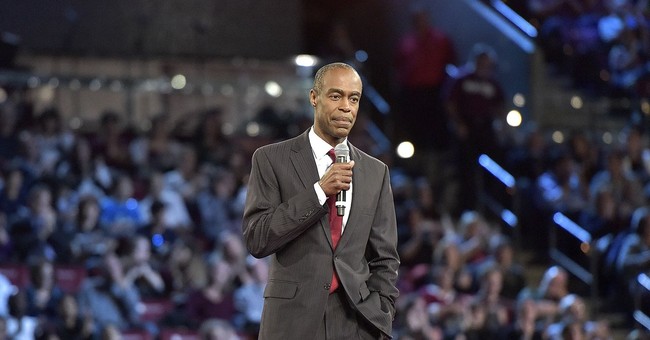 Well, the Sun-Sentinel did not hold back in their piece about the Broward County school officials and their PROMISE program that shuns disciplinary actions for students that possibly commit felonious acts. The program was enacted under the Obama era. In 2011, the Obama White House wanted to keep more kids in schools, Broward Schools Superintendent Robert W. Runcie endorsed it and in 2013, PROMISE went into effect. Paul Sperry wrote in RealClearInvestigations about how the program has created a climate of chaos in school districts, where discipline has become non-existent to the point where students know they can’t be expelled, leading to assaults on teachers:

Broward County adopted a lenient disciplinary policy similar to those adopted by many other districts under pressure from the Obama administration to reduce racial ‘disparities’ in suspensions and expulsions,” said Peter Kirsanow, a black conservative on the U.S. Commission on Civil Rights in Washington. "In many of these districts, the drive to 'get our numbers right' has produced disastrous results, with startling increases in both the number and severity of disciplinary offenses, including assaults and beatings of teachers and students.”

Yes, Marjory Stoneman Douglas shooter Nikolas Cruz was part of this program; Runice tried to deny it, but finally admitted he was referred to it in 2013 after committing an act of vandalism (via WLRN):

Two sources with knowledge of Cruz’s discipline records told WLRN he was referred to the so-called PROMISE Program for a three-day stint after committing vandalism at Westglades Middle School in 2013.

Did he attend the program? No. He didn’t finish the prescribed three-day course. Why? School officials won’t say. In a lengthy piece, the Sentinel did not hold back, saying that this program allowed troubled students, like Cruz, to “slide.” It’s got to the point where teachers in Broward are being told not to take drastic disciplinary actions to avoid tarnishing the school’s image, which has taken pride in its increased graduation rates and reductions in the number of students being suspended or expelled:

Okay who at the NRA got to the journalists at Florida Sun Sentinel? This is extremely damning on the superintendent & school system in Parkland https://t.co/7CvR9C55zq

Broward Schools have grown so tolerant of misbehavior that students like Nikolas Cruz are able to slide by for years without strict punishment for conduct that could be criminal.

The culture of leniency allows children to engage in an endless loop of violations and second chances, creating a system where kids who commit the same offense for the 10th time may be treated like it’s the first, according to records and interviews with people familiar with the process.

The culture of leniency allows children to engage in an endless loop of violations and second chances, creating a system where kids who commit the same offense for the 10th time may be treated like it’s the first, according to records and interviews with people familiar with the process.

Cruz was suspended at least 67 days over less than a year and a half at Westglades Middle School, and his problems continued at Marjory Stoneman Douglas High School, until he finally was forced to leave.

-- Students can be considered first-time offenders even if they commit the same offenses year after year.

-- The district’s claim of reforming bad behavior is exaggerated.

--Lenient discipline has an added PR benefit for the district: lower suspensions, expulsions and arrests along with rising graduation rates.

The program, the pride of Superintendent Robert Runcie, was designed to use counseling and mentoring to help students avoid the school-to-prison pipeline. Under former zero-tolerance policies, black students ended up suspended, expelled and arrested at rates that were widely disproportionate to their peers.

Desmond Blackburn, then Broward’s chief school performance and accountability officer, specifically instructed teachers and staff in a video years ago to challenge and nurture students, while using suspensions, expulsions and arrests as “absolute last resorts.”

Now, many teachers and parents say Broward has created a culture in which teachers are expressly told or subtly pressured not to send students to the administration for punishment so a school’s image is not tarnished.

So, how what’s the process for the PROMISE program? The publication added, “a student can commit a subsequent infraction without being considered a repeat offender, as long as it’s not the exact same violation, in the exact same year. The following year, they start with a clean slate.”

Tim Sternberg, a former assistant principal Pine Ridge Educational Center whom the Sentinel interviewed and who helped enact the program said it was “problematic” since students could develop a mindset that it’s okay to commit a felony because you get a clean slate every year. As for the data, he told the paper,  “They aren’t tracking kids over time.”

Rather than focusing on punishment, restorative justice seeks to repair the harm done,” the district explains. Indeed, it isn’t really punishment at all. It’s more like therapy. Delinquents gather in “healing circles” with counselors, and sometimes even the victims of their crime, and talk about their feelings and "root causes" of their anger.

Students who participate in the sessions and respond appropriately to difficult situations are rewarded by counselors with prizes called “choice rewards,” which they select in advance. Parents are asked to chip in money to help pay for the rewards.

Listed among the district’s “restorative justice partners” is the Broward Sheriff’s Office. Deputies and local police officers, as well as court officials, routinely attend meetings with PROMISE leaders, where they receive training in such emotional support programs.

The program also includes a separate juvenile “system of care,” rather than the regular court system, where delinquents and parents are counseled about the consequences of getting caught up in the criminal system.

So, after that despicable North Korean kangaroo-style court town hall hosted by CNN that smeared the National Rifle Association, law-abiding gun owners, Second Amendment supporters, rural America, and Republicans—it was actually, as it’s been reported prior, the fault of government. The FBI has two tips on Cruz and did nothing. The local police were called over 40 times to the Cruz residence, some of which involved reports of him pointing firearms at people’s heads, and did nothing. And the school administration obviously did nothing, despite a detailed and sordid history of misconduct.  State officials, who were contacted by Broward Schools in 2016 when Cruz cut himself after breaking up with his girlfriend, probably should have had him committed to a state facility for observation via Baker Act. This would have shown up in a background check and most likely would have barred him from purchasing the AR-15 he used to murder 17 people on February 14, 2018. So, how is this the fault of the NRA? It’s not—as with any act of a bad guy with a gun. They’re the only organization where the members are blamed for the actions of random criminals.

That CNN town hall event was a disgrace. The Democrats who used it to try and score political points—looking at you Sen. Bill Nelson (D-FL)—are a disgrace. And the anti-gun Left is a disgrace. These are the folks who say trust government to protect us. Government failed at all levels here, but the Democrat-media complex is a very powerful force. Don’t expect an apology, even though many need to be handed out by this insufferable bunch.