Pelosi: Why Yes–Democrats Are Going To Raise Taxes If We Retake The House 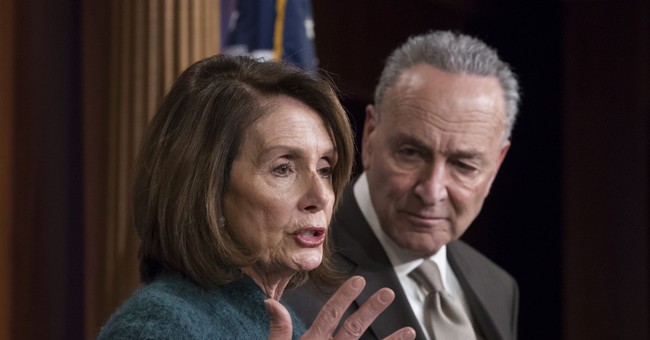 I guess if you can say anything positive—and I’m using that phrase loosely—about Nancy Pelosi is that she doesn’t shy away from what she thinks is right, even if the policy is totally insane. She's also God’s gift to the GOP for keeping them well supplied with endless cannon fodder. Let’s go back to Tuesday, where the California liberal said that taxes would go up if Democrats retake the House in the 2018 midterms (via WaPo):

Appearing at a Politico event, Pelosi was asked to respond to GOP talking points that a Speaker Pelosi would institute single-payer health care and “raise taxes” by moving to “roll back the tax cuts that they passed this year.” Pelosi's response: “The second part there is accurate.” So there is Pelosi — on video — appearing to confirm she would try to raise taxes if Democrats win back the majority.

The moment isn't quite as easily transferrable to GOP campaign ads as some might want it to be, given that the question was somewhat complex. And Pelosi may argue that her “that's accurate” comment was about rolling back certain tax cuts rather than "raise taxes." She added, “I do think we should revisit the tax legislation in … a bipartisan, transparent way.”

Her spokesman, Drew Hammill, pointed to Pelosi's previous comments looking to roll back specific aspects of the tax cuts while strengthening middle-class tax cuts: “Once again, Republicans are desperate to misrepresent any effort to roll back their debt-exploding tax giveaways for big corporations and the wealthiest 1 percent as ‘raising taxes’ on middle class families.” He noted the that GOP tax plan would eventually raise taxes on individuals when those tax cuts expire in a decade. (Congress may renew those cuts before then.)

But that nuanced position was, for a moment, set aside. Most any politician knows that when you are asked whether you want to “raise taxes,” the next word out of your mouth probably shouldn't be “yes.” You talk around it. You massage it. Republicans passed this bill partially in the hope that Democrats would be baited into running against tax cuts and for raising taxes, and Pelosi seems to be obliging them.

"I do think that we should revisit the tax legislation in the way that we always have, in a bipartisan, transparent way,” she said.

Yeah, translation: crafting a bill that could not pass Congress because it wouldn’t really be tax relief at all. Second, they would craft a bill that couldn’t pass because any tax reform passed and signed into law is a win for Trump, which is anathema to the resist mantra infesting the Democratic base. So, let’s just kill any notion about nuance here that will undoubtedly be cited by liberals. The fact is Democrats will raise taxes. The Trump tax bill signed into law last December has become more popular, over three million workers have benefitted from the bill, along with over 250 companies. It is a pro-middle class and working class bill. CNN’s Jake Tapper noted this and Sen. Bernie Sanders (I-VT) admitted to it as well.

Recommended
The Tragedy of Uvalde and Toxicity of Politics
Ryan Bomberger

Concerning application of this law, voters have seen through the Democratic propaganda that muddied this legislation when it was going through the House and Senate. With the Democratic ballot advantage of the 2018 midterms having all but evaporated, maybe now is not the best time for the Left to be pushing for tax increases, then again—who am I to stop them? Keep talking, you’ll eventually hang yourselves.

Also, Pelosi was rather cagy concerning whether the middle class tax breaks signed into law would be made permanent. Bet the mortgage that the Left wants to scrap the whole bill just to screw Trump and the working people of America. Remember, these people think working class folks are too dumb to know that $1,000 bonuses are crumbs and too stupid to start saving, or something. That’s your Democratic Party, folks—a bunch of coastal, urban-based, and insufferably condescending hyenas who are textbook examples of those who are out of touch with the rest of the country. That's who will be running the show in the House if the GOP doesn't turn out to vote in November.