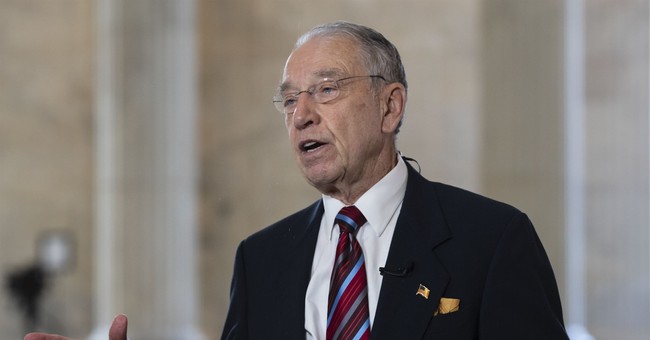 While President Donald Trump took swipes at Special Counsel Robert Mueller and Facebook CEO Mark Zuckerberg testified before Congress over the social media giant’s allegations of data misuse, Sen. Chuck Grassley (R-IA), chairman of the Senate Judiciary Committee, said that it’s quite possible that hearings for a Supreme Court nomination could occur within the coming months. Associate Justice Anthony Kennedy is said to be mulling retiring from the bench.

It was not the meat of the story. Grassley was merely warning the president not to fire Mueller, or anyone in the DOJ, like Attorney General Jeff Sessions, which would burden the Senate with yet another nominee to confirm. The Iowa Republican said that firing Mueller would be an act of political suicide, adding that he trusts Mueller. At the same time, Grassley mentioned that he feels the DOJ’s Russia probe has reached a dead end concerning whether the Trump campaign colluded with the Russians (via Roll Call):

The Iowa Republican’s defense of Sessions, who faced criticism for recusing himself from the investigation of Russian interference in the 2016 presidential election, seemed in part because Grassley thinks his committee may be facing the prospect of a Supreme Court nomination later in 2018.

“I think Jeff Sessions is doing a good job even though on some issues I very dramatically disagree with him,” the Iowa Republican said on the Fox Business Network. “We’ve got three Cabinet people to approve now. We may even have a Supreme Court Justice to approve down the road a few months. The president shouldn’t be overburdening Congress with finding a new attorney general and going through that, particularly when the Democrats on every nomination [that] comes up, they filibuster.”

Guy wrote that Sen. Dean Heller (R-NV) said that Kennedy is said to be making his way for the exit in early summer. Heller hopes this news would get the base a bit more energized since there seems to be a bit of lull period occurring, though some polling shows that GOP voters are just as enthusiastic to vote this year as Democrats. Also, let’s not forget that 21 percent of the 2016 electorate was motivated to vote over the future of the Supreme Court. Of that slice, the split was 56/41 breaking for Trump. McConnell made a gamble blocking Obama’s nomination of Merrick Garland in the hopes that a Republican would win and fill the vacancy left by the late Antonin Scalia with a solid conservative. That happened. We got Gorsuch.