McConnell's SCOTUS Gamble Might Have Helped Put Trump Over The Top 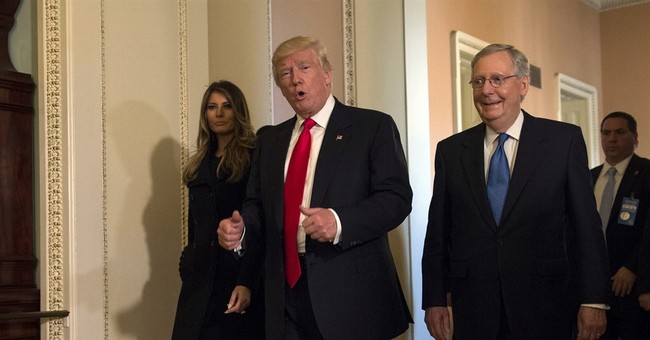 Did Senator Mitch McConnell (R-KY) help President-elect Donald J. Trump clinch his upset win over Hillary Clinton? It’s possible. Granted, he won. The GOP won. We’re now the dominant political force in the country—and it’s time to get to work. Republicans will soon no longer have Obama or Sen. Harry Reid (D-NV) to blame for stalled bills. Yet, while Trump was able to energize scores of white rural voters that ran up the score due to Clinton’s inability to hold the Obama coalition on Election Day, there was a significant slice of voters that backed the president-elect due to the Supreme Court. In fact, 21 percent of the electorate said the Supreme Court was their most important factor when deciding who to vote for and Trump won these people by 15 points (56/41).  That SCOTUS catalyst would’ve been non-existent if McConnell had caved to political pressure to confirm Merrick Garland to fill the late Justice Antonin Scalia’s vacancy.

It was a gamble. If Trump had lost, the possibility of Clinton nominating a pure liberal to the Court would’ve been possible, though a lot of her political capital could have also been squandered in the process. The GOP may have said they would’ve put up a united front, but the optics, the politics (they did say that the next president should fill the vacancy), and the renewed pressure probably would’ve seen the GOP move on this issue. For Clinton, she could’ve stuck with Garland, since she probably wanted to put more energy in other issues, like Obamacare. At the same time, her left flank would’ve cried foul for sure; Garland isn’t well liked with progressives over his siding with the Bush administration over enemy combatants. Conservatives are wary over Garland’s opinion about the Second Amendment. Regardless, this isn’t going to happen. Trump has a solid list of potential nominees, crafted by The Heritage Foundation and The Federalist Society, the latter of which was co-founded by Scalia. Senate Republicans kept their word and now we have a guaranteed shot to rebuild and strengthen a conservative majority on the Court, possibly for the next generation (via CNN):

One of the biggest winners Tuesday wasn't even on the ballot.

Senate Majority Leader Mitch McConnell can do a victory lap now for his success in keeping President Barack Obama from shifting the ideological balance of the Supreme Court.

Democrats, meanwhile, have to ask whether Obama's nomination of Merrick Garland, a 63-year-old moderate, was a mistake. Some progressives hoped for a younger candidate, with a more diverse background, might have better excited liberals.

It was McConnell who seized the moment after the death of Scalia last February to announce there would be no confirmation hearings until after the election. "The next justice could fundamentally alter the direction of the Supreme Court and have a profound impact on our country," he said at the time.

There's no way of knowing if McConnell was certain a Republican would win. But it was worth a shot for the veteran senator. He held to his promise and denied Obama's pick, federal appeals court Judge Merrick Garland, a hearing or vote. And now, he has likely ensured a conservative majority on the Supreme Court for years to come.

Carrie Severino of the Judicial Crisis Network reiterated the opportunity the Trump White House has at solidifying a conservative majority on the Court, while also noting that there are scores of vacancies to fill in the U.S. Court of Appeals. Over at Hot Air, Allahpundit also wrote that McConnell holding the line on Garland possibly made the difference:

…given how narrow his margins of victory were in Wisconsin, Pennsylvania, and Michigan, with Trump winning the three states by just a bit more than 100,000 votes total, even a small number of #NeverTrumpers coming home to the GOP in the end because of the Court might have been decisive. Trump’s electoral-college margin was impressive but his popular-vote advantage in the winning states was whisker-thin. Every vote mattered. And the Court vacancy surely earned him some reluctant votes.

In all three of the Rust Belt trifecta states, Wisconsin, Pennsylvania, and Michigan, Trump’s support among Republicans was slightly better than Clinton’s was with Democrats. In Pennsylvania the GOP split for him 89/9 (+80) versus Democrats splitting 87/11 for Clinton (+76). In Michigan Republicans broke 90/7 for Trump (+83) compared to Democrats breaking 88/9 for Hillary (+79). And in Wisconsin, which was supposed to be Clinton’s strongest state, they were dead even at +84 in net party support with Republicans dividing 90/6 for Trump and Democrats dividing 91/7 for Clinton. Any degree of underperformance with his own base might have cost him the election, but in the end they were rock solid. Alas, the state exit polls didn’t ask specifically about the Supreme Court, but given how tight those three races were and how remarkable Trump’s support was among what was supposed to be a divided Republican Party, is it likely that the Scalia vacancy made the difference? I think it’s surely possible.

So, while this shouldn’t be used by Senate Republicans to dictate the Trump agenda, the president-elect should at least acknowledge that Mr. McConnell, who is not beloved by conservatives, actually did Trump and the Party a solid by firmly saying “no” to Garland.