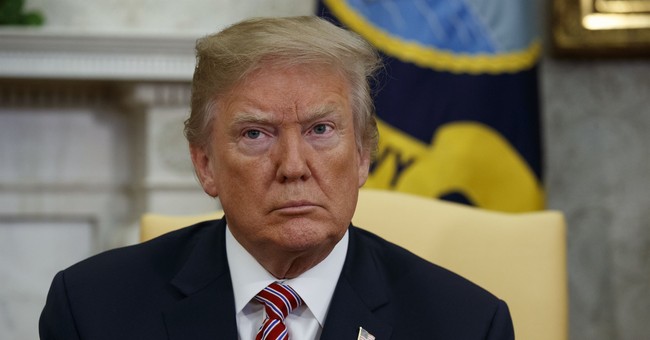 First, this is from CNN, so keep that in mind; the news organization that couldn’t report on President Trump feeding koi fish in Japan accurately. Yet, if true, this could be a rather bombshell event that will get the Left, Democrats, and their allies in the media fired up: Trump is considering firing Deputy Attorney General Rod Rosenstein, who signed off on the warrant used to search the offices and residence of Michael Cohen, Trump’s personal lawyer (via CNN):

President Donald Trump is considering firing Deputy Attorney General Rod Rosenstein, multiple people familiar with the discussions tell CNN, a move that has gained urgency following the raid of the office of the President's personal lawyer.

Such an action could potentially further Trump's goal of trying to put greater limits on special counsel Robert Mueller.

This is one of several options -- including going so far as to fire Attorney General Jeff Sessions -- Trump is weighing in the aftermath of the FBI's decision Monday to raid the office of Michael Cohen, the President's personal lawyer and longtime confidant. Officials say if Trump acts, Rosenstein is his most likely target, but it's unclear whether even such a dramatic firing like this would be enough to satisfy the President.

Trump has long been angry at top Justice Department officials, who he feels have not done enough to protect him from Mueller's ongoing probe. But two sources said the raid could mark a tipping point that would prompt the President to take more aggressive action against the special counsel.

Cohen is under the microscope for FEC violations and bank fraud over payments to porn star Stormy Daniels, who alleges she had an affair with Trump in 2006. The price for her silence was $130,000, which was doled out to her during the 2016 election. Trump raised more eyebrows yesterday when he said that “we’ll see what happens” concerning whether he’ll fire Special Counsel Robert Mueller, who is heading the DOJ’s investigation into whether the was collusion between the Trump campaign and the Russians.  That phrase “we’ll see what happens” has usually been the kiss of death to top folks within his administration, namely Rex Tillerson and Steve Bannon.

Senate Minority Leader Chuck Schumer (D-NY) warned that firing Rosenstein could lead to a constitutional crisis (via The Hill):

"I’d like to make something crystal clear to the president: Mr. President, any attempt to remove Rod Rosenstein will create the exact same constitutional crisis as if you fired special counsel [Robert] Mueller," Schumer told reporters on Tuesday.

Schumer took to the Senate floor today to denounce the president for calling the FBI raid a “disgrace” and an “attack on the nation.” The New York Democrat said that legislation might be needed to protect Mueller from being fired without cause by the Trump White House.