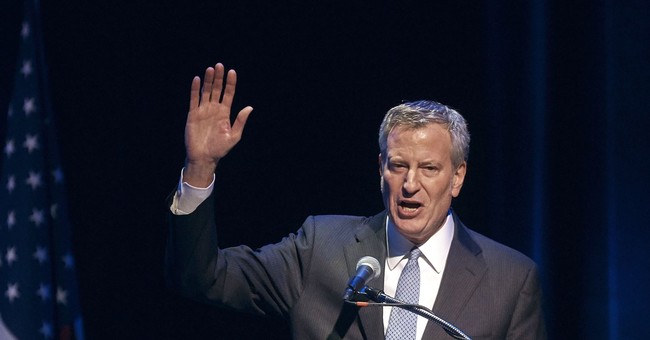 Well, for Mayor Bill De Blasio, who’s gung-ho about limiting Second Amendment rights, he’s having some trouble in his own backyard. Over the weekend, a top aide was arrested for gun charges. Reagan Stevens, who works in the Criminal Justice office of De Blasio’s administration, was arrested for criminal possession of a loaded handgun. She was arrested with two other individuals who were double-parked at the corner of 177th Street and 106th Avenue in Jamaica, according to NBC 4 New York. The ShotSpotter detection system went off in their vicinity. The handgun had an eight-round magazine, though only three bullets were left. It’s not known who the gun or the car was registered to, or if it was the weapon that set off ShotSpotter. Stevens has been suspended without pay over this incident (via NBC 4 NY):

Too many lives cut short by gun violence. Remembering #SandyHook tragedy today by doing our part in NYC to get guns off our streets.

Reagan Stevens, the deputy director of Youth and Strategic Initiatives, was charged along with two men after officers found the trio in a vehicle with a loaded handgun late Saturday night, according to police.

Hughes and Forbes were allegedly carrying knives at the time.

Police haven't said who the gun or vehicle are registered to.

Patrick Gallahue, a spokesman for the Mayor's Office of Criminal Justice, said in a statement to News 4 that Stevens was suspended immediately without pay pending an investigation. “We take these allegations very seriously,” Gallahue wrote in the statement.

Stevens said she was unaware their was a firearm in the vehicle.