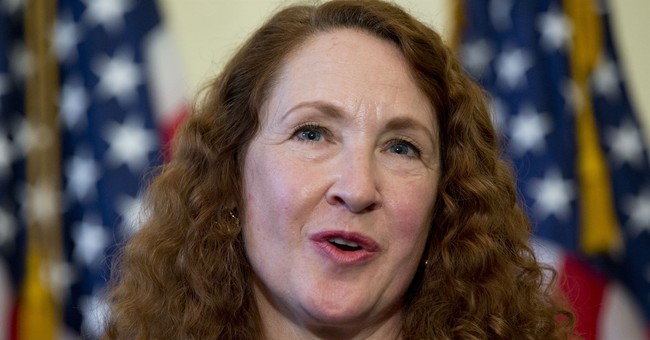 The war on women is coming from inside the House. The Me Too moment has brought the bad behaviors of many across multiple industries to light. Many liberal politicians on the Hill have worked to bring these matters to light and a few Republicans. It goes without saying that sexual harassment and abuse is unacceptable in the workplace. Sen. Al Franken (D-MN) and Rep. John Conyers (D-MI) have been shown the exit due to past sexual misconduct allegations. And now, one of the Democratic congresswoman who pushed for Conyers’ resignation is in the crosshairs for keeping her former chief of staff on the payroll three months after he reportedly made a death threat to a senior aide he was dating in Rep. Elizabeth Esty’s (D-CT) office. The Washington Post, piggybacking off the Connecticut Post, reported that Tony Baker left a threating voicemail for Anna Kain on May 5, 2016. Esty found out within a week, but did not suspend Baker. She kept him on staff, co-wrote a recommendation letter for him for find another jobs, and gave him $5,000 severance. Baker eventually landed a new job at Sandy Hook Promise, a gun control group. He was fired from the group this week, the publication noted:

Kain, who provided a copy of the recording to The Washington Post, alerted the police, filed a report for felony threats and obtained a 12-month restraining order against Baker.

According to emails obtained by The Post, Esty found out about the episode within a week. At that point, the Connecticut Democrat took matters into her own hands.

Rather than firing or suspending Baker, the congresswoman consulted her personal attorneys and advisers, she said. She also spoke to Kain on May 11, emails show; Kain said she provided detailed allegations that Baker had punched, berated and sexually harassed her in Esty’s Capitol Hill office throughout 2014, while she worked as Esty’s senior adviser.

Baker did not leave for three months. By his last day on Aug. 12, according to documents Esty provided to The Post, he and Esty had co-written a positive recommendation letter he could use in a job search and signed a legal document preventing her from disparaging him or discussing why he left. Baker went on to work for Sandy Hook Promise, the gun-control group created after the 2012 shooting in Esty’s district. He was dismissed from the group this week after The Post contacted him.

In retrospect, Esty said she dealt with the situation poorly. She said she plans to reimburse the U.S. Treasury for what she described as the roughly $5,000 Baker received in severance. She also plans to improve how she runs her office, she said.

The congresswoman, a perennial target for Republicans, was among the Democrats who called on their colleague Rep. John Conyers Jr. (Mich.) to resign after he was accused last fall of serially harassing female staff members.

Esty provided The Washington Post with a copy of her agreement with Baker, which included multiple secrecy provisions, a draft recommendation letter and his severance terms. The document provides a rare look at a contract signed by a lawmaker and a departing senior staffer facing possible scandal, the result of a process that at no point sought a formal response from Kain.

And The Post added that Kain was so worried about endangering Esty’s re-election, that she took her cell off the House WiFi network so she could look for ways to report the abuse. Baker also reportedly threatened her professionally if she ever opened her mouth.

Okay—so Esty called for Conyer’s resignation for sexual harassment, shouldn’t she go? We’ll see. Frankly, I was shocked the fellow Democrats pressured Franken and Conyers to go—usually they rally around, saying how their situation is different because they’re liberal on the issues. If you’re a Democrat, you get a pass. Well, the hypocrisy was too great; they left. But was it because there’s a genuine switching of the gears, or were liberals just trying to keep the narrative alive. I don’t mean that sexual harassment doesn’t exist. I don’t mean it in that context. I’m talking about the Bill Clinton skeleton. Harvey Weinstein, the former Hollywood heavyweight producer, was the epicenter for the Me Too avalanche. For liberals, there was a credible rape allegation lobbed against Bill Clinton, along with scores of sexual harassment allegations. He got a pass; he was elected twice to the presidency. In this case, rape culture was given green light because Bill was a Democrat.

Now, with Weinstein and Me Too, the right flank was vulnerable. So, some feminists said that the Democratic Party’s day of reckoning had come with their shielding of Bill, others finally coming around to saying that they believe Juanita Broaddrick and her allegation that Clinton sexually assaulted her during his 1978 Arkansas gubernatorial run. Was this come-to-Jesus moment with Bill, Conyers, and Franken genuine? It remains to be seen. All of it seems to be shamelessly done for political reasons. Conyers and Franken’s allegations came towards the end of a special Senate election in Alabama; Republican Roy Moore was facing serious past allegations of sexual misconduct with teenage girls. Conyers and Franken was becoming a distraction. Democrats couldn’t attack Moore or the GOP with these two men in office. The laser focus on the GOP couldn’t be redirected with them muddying up the works. So, they got the axe.

This is a brutal editorial from Conn’s largest paper for Dem Congresswoman Esty, writing about her "colossal failure of judgment” and calling her “complicit” in cloaking sexual harassment and abuse after @eliseviebeck’s reporting in WaPo https://t.co/dmGCROrudD

We’ll see what happens with Esty, but her state’s largest paper’s editorial board just posted an op-ed saying she has to go (via Hartford Courant):

Elizabeth Esty will likely spend the next several days defending her failure to take strong steps to protect a woman who’d been threatened and bullied — by a member of her own staff — by blaming the system and talking about the good she’s done in Congress.

She shouldn’t. She should resign.

After learning about the allegations against her chief of staff, Ms. Esty, the Democratic U.S. Representative for Connecticut’s 5th District, should have ensured that her former staffer was safe and that the man who’d threatened her was held accountable. Instead, she circled the wagons, called the lawyers and kept things quiet.

Perhaps most disturbing is that there is no evidence that the woman who was so concerned for her safety was ever formally involved in the deal to protect her alleged abuser.

Time was up for John Conyers.

And now, time is up for Elizabeth Esty.

Hillary Clinton also shielded a sexual harasser on her 2008 campaign if that makes Ms. Esty feel any better.