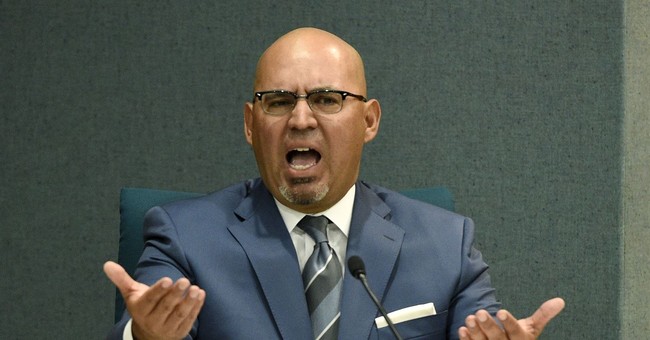 Well, it’s a standard principle to never be overcome with joy when someone loses his or her job. In this instance, we have an exception. El Rancho High School teacher Gregory Salcido has been officially given the axe from his school board. He’s fired. Salcido also serves on the city council for Pico Rivera, California. He was engulfed in controversy after he took issue with student wearing a U.S. Marines t-shirt in January. He was put on leave after the controversy. He rightfully faced an immense backlash across multiple platforms, even at city council meetings.  He was fired Tuesday evening.

During the controversy, Salcido tried to walk a waffled line, saying he wasn’t anti-military, that he wasn’t attacking the moral character of those who decide to serve, and that he was generally correct that those who don’t do well in school join the military. Right, he’s not anti-military, just a man who thinks they’re the “lowest of the low” (via Fox News):

Salcido faced a severe backlash after a student secretly recorded him asking his government class why they would want to serve in the military, calling those who serve “dumbs---s.”

“Think about the people who you know who are over there. Your freaking stupid Uncle Louie or whatever. They’re dumbs---s,” Salcido can be heard saying in the Jan. 25 tirade.

“They’re not like high-level thinkers, they’re not academic people, they’re not intellectual people. They’re the lowest of our low.”

Villon said thousands of emails flooded the school board, as veterans and relatives of military personnel from all over the world voiced their disgust with Salcido’s comments.

Salcido apologized at a City Council meeting in February, the paper reported, and attempted to clarify that his comments “had nothing to do with their moral character.”

"I don't think it's all a revelation to anybody that those who aren't stellar students usually find the military a better option. ... That's not a criticism of anybody. Anything I said had nothing to do with their moral character," he said, the paper reported.

During a break, he told reporters that he believes the military is the not the “best option” for his students, but added "that does not mean I'm anti-military, because I'm not."

Salcido was a history teacher at the school. His remarks even reached the Trump White House, where Chief of Staff John Kelly, a retired Marine Corps General, said he thought Salcido “ought to go to hell.”